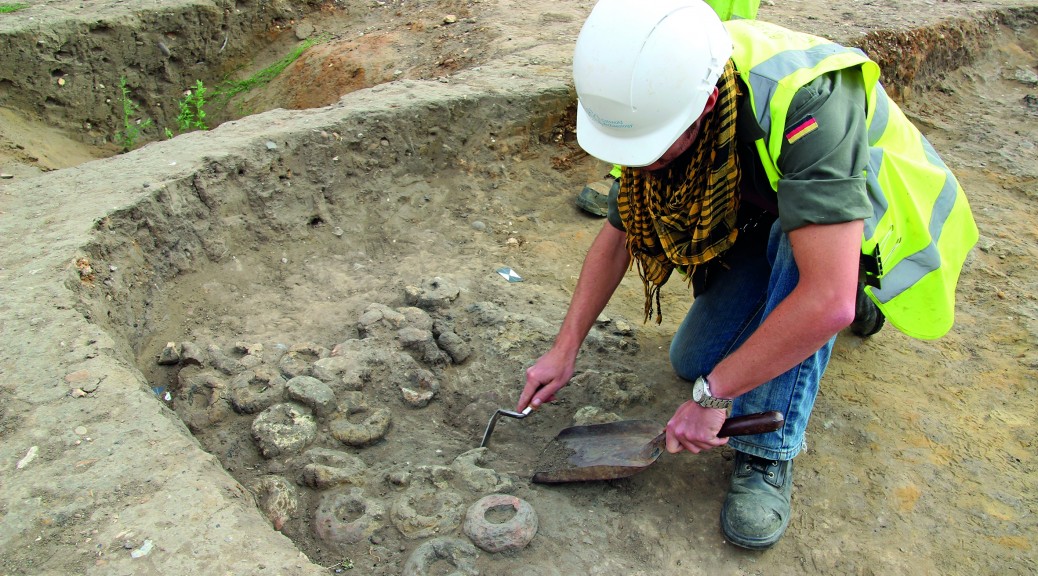 A causewayed enclosure and later discoveries at Thame, Oxfordshire
A talk given to BAS by Ken Welsh on 19th November 2016

Ken Welsh (Regional Manager, Oxford Archaeology) described exciting discoveries at Thame during excavations in advance of housing. The site is on a ridge of land that dips down to the floodplain. Preliminary trenching showed great archaeological potential on the higher ground, mostly Iron Age and Romano-British with a hint of Saxon. The excavation was undertaken as a joint enterprise by Oxford Archaeology and Cotswold Archaeology.

Some Early Neolithic pit clusters (from c. 4000 BC) contained potsherds and flints. Soil samples showed the presence of hazelnuts and wheat, a mixture of wild and domesticated food typical of the Early Neolithic. A series of other pits in lines was interpreted as a causewayed enclosure, an Early Neolithic monument type consisting of an inner circuit of pits/ditches at the brow of the hill and two more circuits lower down. Later geophysics revealed the complete 260 m-diameter enclosure. These rare monuments began to be constructed c. 3700-3600 BC and are mostly distributed in southern Britain with distinct groups along the Thames and its tributaries. They probably functioned as meeting places. People were then living in small, relatively mobile groups and the process of creating the monument was probably as important for binding the community together as the finished enclosure.

The pits contained material that had been imported from some distance, including both plain and decorated pottery. The quantity of pot, more than 5000 sherds, forms one of the largest known assemblages of Early Neolithic pottery and is of national importance. The pots were brought to the monument by different groups, deliberately smashed into large pieces and dumped. Some unusual ‘hybrid’ pottery may represent the sharing of ideas between groups. Most of this material came from the inner circuit of pits and especially from the pits flanking what is interpreted as the main entrance to the enclosure, it being on the natural route up from the floodplain. The second circuit of pits is on the spring line where water oozes out onto the surface: causewayed camps are often associated with water. Some of the pits were enlarged and contained a central posthole, similar to the Neolithic ‘pit-dwellings’ described by Piggott and which, it is now thought, probably held totem poles.

A small Late Neolithic henge (c. 2200-2000 BC) was constructed within the causewayed camp opposite its main entrance, showing the earlier monument had retained its significance over a long period of time. Surprisingly, no Bronze Age pottery was found.

An Early Iron Age settlement (c. 700-400 BC) was built further down the slope avoiding the location of the causewayed enclosure. It consisted of D-shaped enclosures, four-post granaries, roundhouse ring gullies and about 120 storage and rubbish pits. Bell-shaped storage pits were distinguished from other pits which contained large quantities of animal bones and pottery. Two pits contained crouched burials; one was intact whereas the other had apparently been exhumed some ten years later when still partly articulated. The upper part of the body was lifted, turned 180 degrees and then laid back on top together with a pot and a horse skull and reburied. An adjacent pit contained the skeleton of a horse minus its head.

There was little evidence for a Middle Iron Age presence, but many Late Iron Age and Roman features. The latter included droveways and trackways running up from the floodplain which appear to reflect the movement of animals and crops from the surrounding areas into a series of enclosures that were rearranged from time to time throughout the Roman period. One droveway converged with the modern road at the Cuttle Brook and may represent the position of an ancient ford. There were several corn dryers suggesting this was an agricultural processing centre and huge quantities of charred grain and weed seeds were found. Domestic pottery and some personal items including a ring with an intaglio of the god Mercury were recovered, but no villa. Roman activity did not extend beyond the outer circuit of the causewayed camp, suggesting this monument was still visible after 4000 years.

Some early Saxon structures suggest possible continuity of use from the Roman period since there was no evidence that the site had become overgrown. Eleven to 12 grubenhausen were dotted around the slope overlooking the Thame valley, and most were associated with weaving. There was vague evidence for a hall structure. One sunken-floored hut had a beaten earth floor with a shallow longitudinal pit for a loom base, with the loom weights in situ. This site was contemporary with early Saxon Thame, where a royal minster church was recorded in AD 675.