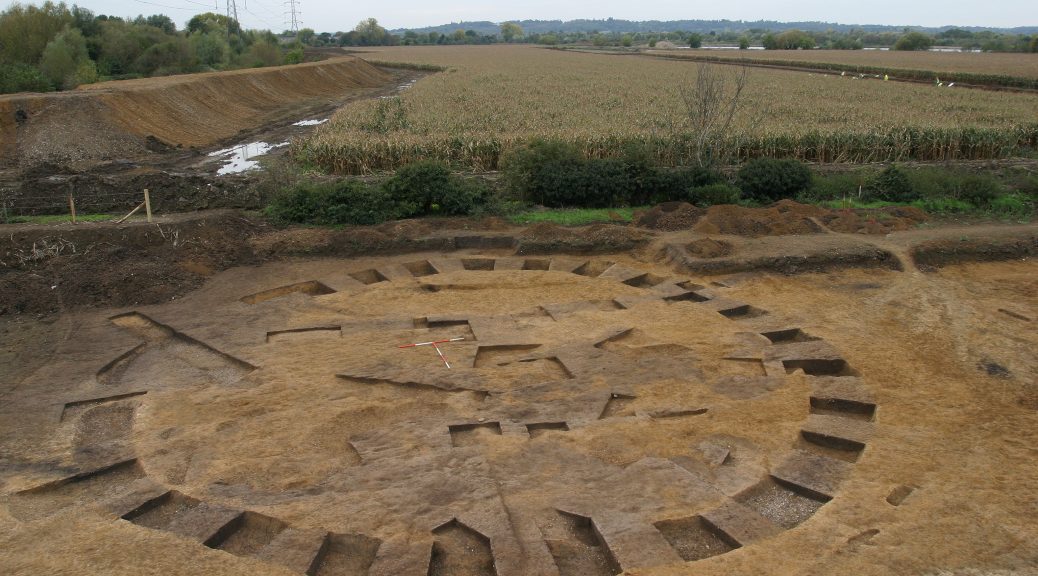 A talk given to BAS by Alistair Barclay, Wessex Archaeology, 17th February 2018

Alistair presented a round-up of the prehistoric findings from this quarry, where gravel extraction is now complete and the site destined for landfill. The earliest trace of human activity was a Lower Palaeolithic handaxe dated to c. 200,000 years. A late Upper Palaeolithic hunting site on a gravel island between two former river channels yielded butchered horse bones. Apart from a partial aurochs skeleton dated c. 10,000 years ago, there was very little evidence for the Mesolithic and the next sign of human activity appeared in the Early Neolithic after a gap of about 5000 years.

Archaeological work is now starting at another gravel-extraction site at Riding Court Farm, where there is a known Neolithic causewayed enclosure. The Kingsmead Quarry site lies midway between this enclosure and another at Staines, so it was probably not surprising to find evidence of Neolithic occupation. Four rectangular Early Neolithic houses were excavated, dating from c. 3800 BC, representing two types: a six-post structure with presumably a wattle infill, and another marked by bedding slots that formerly held vertical timber planks (preserved as darker soil within the slots). Both types consisted of two rooms and had slightly incurving end walls, similar to contemporary long barrows. Careful sieving revealed a Langdale axe flake, arrowhead fragments, a bone pin, cereal grains and small potsherds. The houses varied in size but were typically about 8m long by 6m wide. A reconstruction drawing of a plank-built house suggested an upper floor at the rear accessed by ladder, and an identical house plan from a site in Derbyshire shows this building tradition extended over a wide area.

Several human and animal burials may be contemporary with the houses but it was impossible to date them. An Early Neolithic U-shaped ditch, which later became part of the ditch surrounding a Middle Neolithic oval barrow, contained a feasting deposit of cattle bones and broken pot. At the edge of the quarry, part of a water-logged circular ditch was excavated that had contained birch-bark bowls and a Late Neolithic Peterborough Ware pot. Late Neolithic Grooved Ware pottery of the ‘Durrington Walls’ type was found elsewhere on site, dated c. 2900-2400 BC contemporary with Stonehenge. A rare Late Neolithic inhumation burial was also found, dated to c. 2600 BC.

Beaker burials are rare in the Middle Thames region but one was found at Horton containing beaker fragments, five small beads of rolled sheet gold (possibly recycled from hair ornaments), five amber beads and an amber button, and 50-60 tiny lignite beads that were retrieved by sieving. The burial is believed to be that of a high status woman.

There was very little evidence for the Early Bronze Age apart from a ritual deposit of flints (one of which was Palaeolithic). Everything changed in the Middle Bronze Age when extensive field systems with farmsteads were laid out and the landscape was enclosed for the first time. An associated cremation cemetery was excavated. The farmsteads consisted of clusters of small round houses surrounded by rectilinear paddocks, some of which contained waterholes. A possible ‘sheep race’ to control the entry of livestock was identified in some fields. Animal burials were found in the enclosure ditches, including a complete cow and calf that may have succumbed to disease. The farmsteads were founded c. 1500 BC and persisted for about 100 years. Finds included an elaborately decorated bronze cloak pin that had been imported from northern France. One of the round houses was particularly large and unusually had a north-east entrance aligned with the earlier Neolithic oval barrow; it may have served a ritual function. Part of a female skull associated with a cattle jaw from the bottom of a Middle Bronze Age ditch had pitting around the nasal opening suggesting the possibility of leprosy, but that could not be confirmed and neither could the skull be securely dated. Previously the earliest evidence for leprosy in Britain dates to the Iron Age.

There was a lot of Middle Bronze Age pottery, including bucket urns from the cemetery which probably originally served as domestic cooking pots. Residue analysis showed that at least one bucket urn had been used to boil milk, and many vessels had been used to make stews: excess fat at the bottom was interpreted as the meat being ‘browned’ first before the rest of the ingredients were added. One such pot could have held three gallons of stew.

There was little evidence of Late Bronze Age activity when the field systems went out of use. In the Iron Age a series of long boundary ditches was constructed, similar to the well-known Wessex linear ditches, and part of an Iron Age settlement was found at the quarry edge. A Roman farmstead yielded a splendid Samian bowl which is now in the Windsor museum. Rather surprisingly, there was no evidence for the Saxons and very little later archaeology. It remains to be seen if the Riding Court Farm excavation will add to this story.