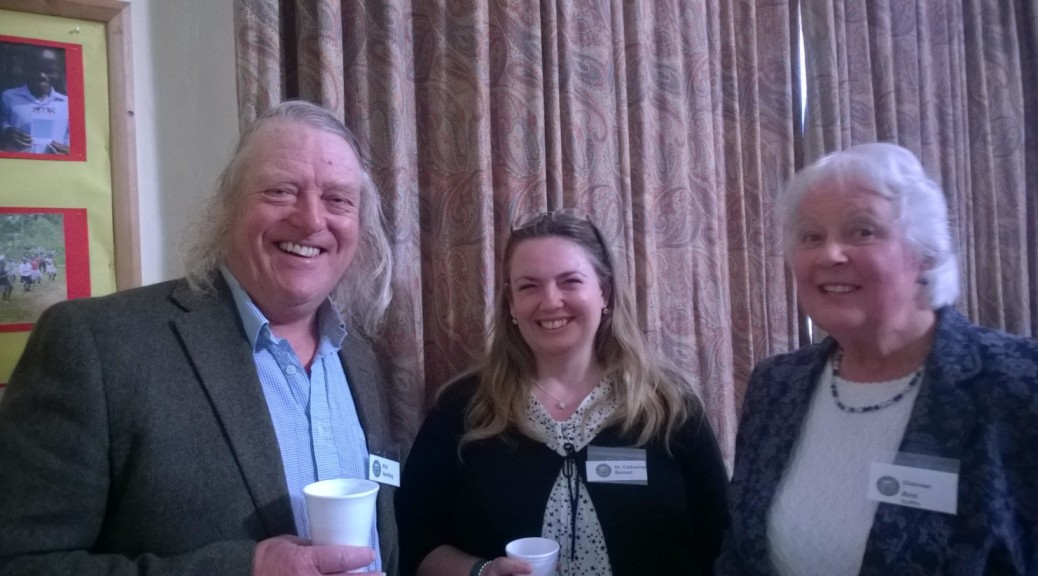 Archaeology in and around Berkshire

The BAS Annual Conference was held in Newbury on 2 April 2016 and introduced by the Chairman, Ann Griffin.

Next Roland Smith from Berkshire Archaeology introduced Recent discoveries in East Berkshire with evidence for historic horse-racing, the archaeology of gravel extraction sites in the Windsor area, Iron Age iron-working at Wokingham, Bisham Abbey moat, and an 18th century graveyard in Maidenhead. Berkshire Archaeology is now located in the Berkshire Record Office and open afternoons are held on Thursdays, although prospective visitors should book first.

After coffee, Phil Harding (Wessex Archaeology) of Time Team fame talked about Mesolithic flints from Eversley Quarry. An archaeological evaluation of a gravel extraction site in the Blackwater valley found surface scatters of Mesolithic flints and cores, which were investigated further by excavation. The flints were present in peat alongside an old river channel and were dated 9800-9400 to 6690-6500 BC, representing the entire span of the Mesolithic. ‘Shed loads’ of flints were also found on raised knolls and elsewhere, including blade cores, blanks, a tranchet axe and a few microliths. 100 test pits were dug and the spoil sieved using a 4mm-mesh to establish the extent and density of the flint scatters. All the raised areas were sand and they all contained flints. Flecks of charcoal might indicate the deliberate burning of vegetation during the Mesolithic. Neolithic and Bronze Age flints showed the area continued in use and that the Blackwater valley probably formed a corridor linking the Weald and the Kennet.

The Silchester Environs Project was described by Cathy Barnett (University of Reading). This was carried out in 2015-2016 to investigate the later prehistoric land use around Silchester using excavation and survey techniques to explore the origins of the Iron Age oppidum. Preliminary desk top research was followed by mapping features from aerial surveys over periods of time in order to pick out elusive cropmarks. Lidar was found to be particularly useful. This was followed by geophysics. Pond Farm hillfort was shown to have had a palisade, gatehouse and entrance causeway and was radiocarbon dated to 200 BC-AD 20, showing it to be a late Iron Age construction. No artefacts or roundhouses were found and it is suggested that the hillfort was used to protect livestock. There is evidence for further activity in the late Roman period and the site was reused in the early medieval period when the ramparts were remodelled.

Paul Booth (Oxford Archaeology) presented 25 years in the pit: a late prehistoric and Roman landscape in the lower Windrush valley, describing investigations at Gill Mill, another gravel quarrying site, from 1988-2014. Activity on the flood plain started in the Middle Iron Age with house circles and enclosure ditches. The classic roundhouses with post holes of the Early and Middle Iron Age were probably replaced by cob walls in the Late Iron Age which left very little trace. Continuity into the early and middle Roman period is shown as boundaries gradually became more linear. A Roman road (Road 1) ran across the valley and a new settlement was established alongside it in the early/mid-2nd century; a second road (Road 2) ran down the valley and formed a crossroads with the first. The settlement included open areas and enclosures at right angles to Road 1 and regular plots either side of Road 2, from which Road 3 led off towards the valley side. A ring ditch surrounded a 2nd century inhumation burial beneath a mound just south of Road 2. There were many ditches and pits and 10-12 stone-lined wells. At least three single-cell stone buildings were built alongside Road 1, one of which contained Roman domestic items. Circular structures with hearths alongside Road 2 were probably used for smithing. There is some evidence of religious activity, with two small altars, pipeclay figurines and a jet ‘horseshoe’ pendant that could be priestly regalia. There was probably a temple nearby, such being a regular feature of nucleated and roadside sites ‘in our area’.

Large quantities of animal bones were dominated by cattle (75%) and environmental evidence indicated the presence of damp pastures suitable for cattle. This proportion of cattle is only exceeded at specialist butchery centres such as Cirencester. The wider picture suggests cattle were brought in from outside and sent on, possibly as military supplies. The 1047 coins indicate very little activity in the last quarter of the 4th century and the pottery suggests that all activity at the site ceased before the end of the Roman period, probably as the result of a command coming down the military supply chain.

After lunch Steve Clark (BARG) introduced Boxford’s ancient heritage: results of the 2015 excavations. Three Roman sites in fairly close proximity have been known here since the 19th century. The Hoar Hill villa is near the Roman road from Silchester to Cirencester. Geophysics has shown ditches and trackways, and a resistivity survey revealed the villa plan which was about 50 m long with two wings. Several trenches were opened and a C-shaped feature was interpreted as a latrine. A separate ‘industrial’ feature turned out to be a stand-alone bathhouse. The villa reached its peak in the mid-3rd to mid-4th centuries. Lots of CBM was processed and recorded and stone roof tiles, probably from the Purbeck beds near Swindon, were also found. Finds included 52 tiny glass beads. The site at Wyfield Manor Farm appears to have been a complex Roman farmstead but no villa has yet been located.

Circles in the sand: excavations at Thame 2015 by Chris Ellis (Cotswold Archaeology) outlined a seven-month project that uncovered 6000 years of human landscape use. A Neolithic henge, causewayed enclosure and flint-filled pits probably had a ‘ritual’ function. The pit deposits were dated c. 3700 BC and included microdenticulates, a fragment of a polished axe and ammonites. The Early Iron Age was represented by pits and enclosures, four-post granaries, D-shaped enclosures and a massive ditch of unknown function. There was evidence for Roman settlement activity with lots of ditches (some pre-Flavian), a droveway and some partial enclosures, six corn dryers and eight other structures. Tile evidence suggested a villa nearby. An adolescent female burial had later been disturbed and a horse’s skull placed over hers. Anglo-Saxon sunken-floored huts were associated with 6th-7th century pottery and lots of weaving equipment, such as loom weights, suggesting these structures were used for flax weaving. Their suspended wooden floors would have helped to keep the fibres damp and pliable. Thame went on to become an important town in the Saxon kingdom of Mercia and probably had a minster church.

Anni Byard (PAS Officer, Oxfordshire and West Berkshire) presented Latest findings from the PAS scheme, concentrating on finds from Berkshire. The bulk of the material (as in Oxfordshire) was Roman and most of the finds came from West Berkshire. Special items included a Roman copper alloy figurine of a winged boy or cupid holding a goose which was probably of British manufacture. Berkshire ‘hollow dome’ brooches from the Middle Iron Age, dated c. 300 BC are now represented by ten examples, all of which were found either side of the Ridgeway in West Berkshire and Vale of White Horse; these are also known as ‘2Bb2’ or ‘Vale brooches’ and have a very local distribution.

‘Treasure’ was defined as any item consisting of more than 10% gold or silver by weight that was over 300 years old. More than ten coins are required to constitute treasure. The Bix hoard of Middle Bronze Age (1400-1200 BC) ornaments was the first recorded from Oxfordshire, comprising 19 objects in 85 pieces within a bucket urn, including a bracelet, a decorated razor, pins, a torc and rapier blades. The Watlington hoard included three complete Viking silver arm rings, 15 silver ingots and three pieces of hack-silver, together with about 200 silver coins of Alfred the Great and Ceonwulf. This hoard was buried in the 870s as Wessex fought off the marauding Danes and quadruples the number of known coins from the period.

Bronze Age and Roman occupation at Ridgeway School, Reading was described by Steve Ford (TVAS). A trench in the playing field at Ridgeway School, Whitley, revealed a series of Middle Bronze Age pits and postholes radiocarbon dated to 1213-1022 BC. A Late Bronze Age burnt mound consisted of a dump of burnt flints and fire-cracked stones used to heat water in a trough. Burnt mounds are not common in the south-east. This mound probably consisted of a series of filled pits which may have held the trough; it was dated to 1119-919 BC and probably represented a cooking place. Some Early Iron Age pits and postholes were also found, dated to 788-525 BC, and possibly traces of a field system. A tiny piece of Middle Iron Age pot was recovered. There appears to have been continuity from the Late Iron Age to the early Roman period from the 1st to 3rd centuries AD, when the site went out of use. A hoard of 536 coins was found in a 1st-4th century flagon. The coins were dated between AD 238 and 274 and were a mixture of Imperial issues and coins of Gallic rulers. Such deposits are fairly common and they were buried at a time of stress when there were competing emperors in the 270s.

The site is situated on a spring line at the edge of a valley. There was another Roman site at Northcourt Avenue just to the north-east and these sites may have been part of a series of strip parishes/estates crossing the valley. Dating evidence shows that Roman agricultural sites in the Reading area were all abandoned in the 3rd century. There are lots of early Roman sites but very few late ones – did the Saxons enter an empty landscape?

As always, this conference proved to be a very popular event and our thanks are due to the speakers, the helpers, and especially Trevor Coombs who organised it all.