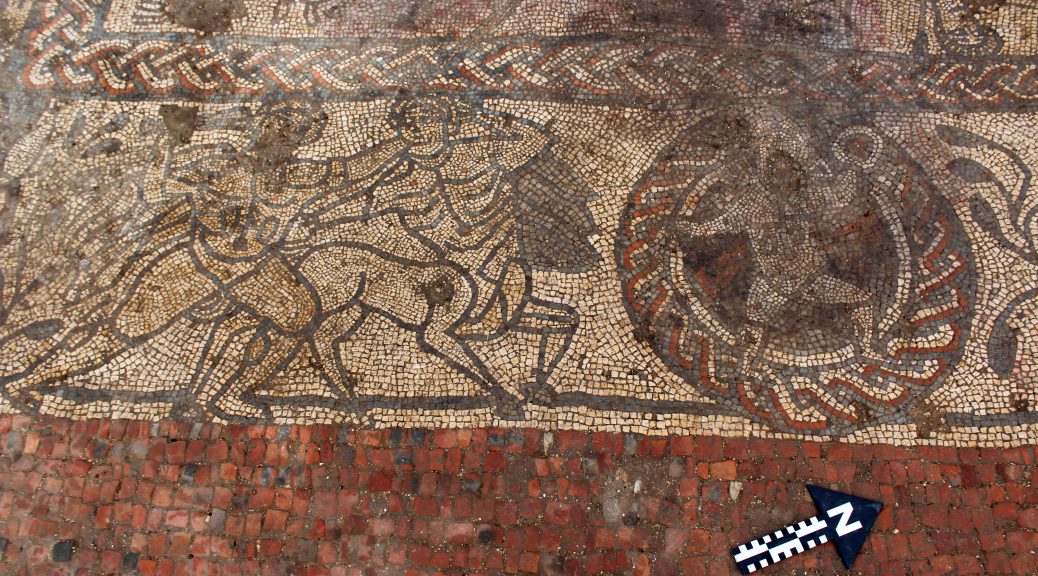 Proceedings started with a presentation by Sarah Orr on the West Berks Archaeological Service, which she is now leading, on what they do and how we benefit from their work. This was followed by a presentation by Kathleen Leary on Recent Discoveries in East Berkshire which included details of a Neolithic sweat lodge found at the Road Transport Laboratory, Crowthorne, and a Saxon mound lying in an industrial estate at Montem, Slough.

After coffee, John Powell, Wessex Archaeology, told us of Mesolithic flint scatters, an early Neolithic causewayed enclosure, late Neolithic pits and Late Iron Age/ Roman evidence found at Riding Court Farm, Datchet.   Then Steve Clark showed us details of a Middle to Late Iron Age and Roman farmstead at Wyford Manor, Boxford and details of the late Roman villa at Mud Hole, Boxford with its exciting mosaic.  The morning was completed by a talk by Professor Mike Fulford in which he gave details of three Iron Age sites around Silchester, the Roman brickworks at Little London and a  1stcentury temple at Silchester which he excavated for the first time in 2017.

The afternoon started with Professor Martin Bell showing how his project’s use of environmental evidence was revealing more about Mesolithic communities in the Kennet Valley.  This was followed by Andrew Hutt talking about the Roman temples in and around Roman Berkshire and the contribution they made to Roman society.

The day finished with two presentations from Oxford Archaeology.  Alex Davies started by telling  us about work at Shinfield which revealed a Beaker barrow, a Bronze Age ritual site where a tree was revered and an Early Iron Age settlement.  But this was just a warm-up, he then revealed details of a long lived-in landscape at Great Western Park, Didcot with evidence of settlement in the Middle and Late Bronze Ages, Early, Middle and Late Iron Ages and the Roman period.  Not be to outdone, Carl Chapness then told us on excavations at Winterbrook, Wallingford, with Neolithic pits, a Bronze Age enclosure, Mid Bronze Age burials, Early to Middle Iron Age settlements, and evidence of Saxon and Early Medieval activity.

A key feature of these presentations was the large scale of much of the fieldwork which was presented which shows that developers in our region are investing significant sums so that our heritage can be investigated and recorded.

Thanks are due to our speakers, and those who helped organise the event.  Special thanks are due to Trevor Coombs for organising the programme and to Maggie Smith who single-handed kept us supplied with refreshments.

Image: Detail of the Boxford mosaic showing Hercules battling a centaur and Cupid