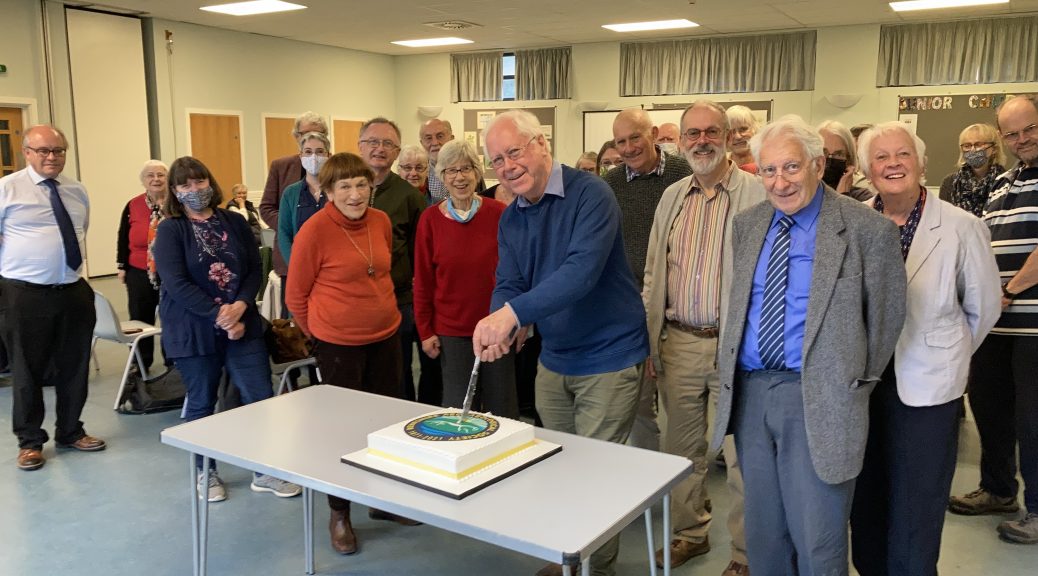 This Day School took place at the Cornerstone, Wokingham on Saturday 2nd October 2021 and was attended by some 30 people including the speakers.  The day was chaired by Keith Abbott.

Mike Fulford on the Silchester baths

The first presentation was by Mike Fulford on his work on the Baths at Silchester.  He brought us up to speed with the site by revisiting the work carried out in 2018 and 2019 before positioning the work carried out in 2021.  He then explained how the caldarium of the first bath house, built AD 50-60, was changed over time with the repositioning of the stoke hole, the hot plunge and the heated floor.

He then outlined the work carried out in 2021 when they excavated the interior of the early 3rd century caldarium which Mike stated was very well preserved.  Figure 1 shows a structure with a stoke hole, a plunge bath and heated floor.  They also excavated the outside walls of the caldarium of the first baths and found that it was resting on oaks beams with an adjacent drain and a sump.  Environmental evidence from the sump suggests that sewage from the bath’s toilets was draining into the sump and may have been used to fill the caldarium hot bath.

After Mike’s talk, we moved to cut the cake celebrating the Society’s 150th anniversary. The title image shows Mike cutting the cake with the many of the Day School attendees.

Fiona started by explaining that since the last BAS Day School her team had recorded 166 new monuments, 254 fieldwork events, 749 consultations, and carried out 200 HER searches and that Heritage Gateway hits on Berkshire Archaeology sites had increased by 75% pcm.  She then went on to present details of 4 sites:

– The Tilehurst Bank: which is 10m wide and 6m high and runs south of the Oxford Road.  Recent work by Cotswold Archaeology showed that it was of Middle Iron Age date

Thanks are due to Fiona for introducing us to sites which fit with our current study areas.

Sarah started her presentation by explaining recent changes to the organisation of heritage in West Berkshire Council and then presented details of 10 archaeological sites across the area.  These included work at:

– Hartshill Copse quarry, where Thames Valley Archaeological Services: added to the work of Cotswold Archaeology in 2002

– Greenham, where Thames Valley Archaeological Services found the remains of round houses and an unusual Roman flagon

– Donnington, where Foundations Archaeology found evidence of a ring ditch

Sarah completed her presentation with details of recent publications she had received, and images of some finds received by Phil Smither the PAS Finds Liaison Officer.

Andrew presented the lecture version of the material shown in the exhibition of the same name and described in the Society’s Summer 2021 newsletter.

Catherine started her presentation by giving a brief resumé of the two people who led this work: Charles Keyser and Harold Brakspear.  She then went on to describe how Keyser led an excavation which removed 6 to 10 feet of overburden to reach the remains of the Bishop’s Palace and that this included removing the remains of two later buildings which were not recorded.  The rest of her presentation explained the phased of development of the Palace and its history; it was owned by the Bishops of Salisbury and then by Queen Elizabeth I and her successors.

John started his presentation with a mention of the archaeological excavations at Reading Abbey from 1779 and through the 19thcentury.  He then provided a summary of Cecil Slade’s excavations 1971-75, the Waterfront excavations 1979-88 and the Stratscan Ground Penetrating Radar survey in 2016.

While giving these summaries he highlighted the fact that they provided contradictory evidence concerning the length of the knave of the Abbey.  He then explained that the geophysics evidence and 12th century documents showed there was a pulpitum at the west end of the chancel.

This event occurred in what may have been a lull in the Covid pandemic and as such everybody found it interesting and a welcome opportunity to chat with people they had not seen for a long time.