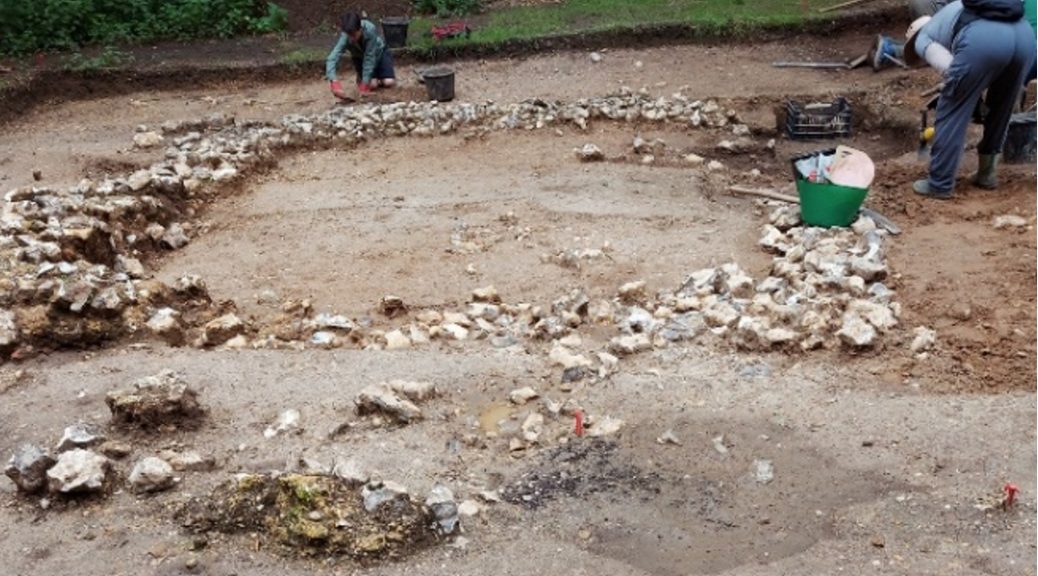 This year’s Day School was held at Saint Nicolas’ Church Hall, Newbury, on Saturday 2nd April and focused on Roman Berkshire.  It was chaired by Andrew Hutt.

In Hungerford an iron lamp was found which is on display in the ‘Focus on Hungerford’ exhibition, West Berkshire Museum.  In Greenham, roundhouses, a ring ditch, and an unusual Roman flagon were found.  AtHartshill Copse Quarry, Thatcham, a Claudio-Neronian burial pit was found with nine pots accompanying the cremation.  Park Farm, Kintbury has produced new finds showing parts of a Roman enclosure with ceramic building material (CBM).  The bathhouse may be part of a villa complex, but the supposed villa is currently presumed under the sewage works.  In Upper Lambourn a possible Roman enclosure and a 3rd century Probus coin have been discovered.  There is possibly a Roman road at Boxford.  In Roman times there were widespread field systems across the Downs which have now been ploughed out.

RoLCAP looks at the central belt and southern area of the Rural Settlement of Roman Britain (RSRB) project led by Mike Fulford, taking the RSRB database and enhancing it with information from the Historic Environment Records (HERs) and with geological and soil information from the National Mapping Project (NMP).  It aims to establish whether Roman farms in given areas were stock based, cereal based or mixed.  It has 10 study areas covering 1600 km².

The Didcot area splits into two along a Northwest-Southeast line with farms above the line and chalk-based soil below.  The results show that clay soil and land liable to flooding was avoided for farms but that fertile gravel-based soils were well utilised.  This was a mixed farming landscape with field systems and trackways used for stock movement.

The Berkshire Downs had field systems implying that this area had mixed farming but with a greater emphasis on the arable.  Most field systems were between 50 and 100 ha in size with some as large as 250 ha.

The Wokingham/Bracknell area has been extensively evaluated but has a less dense pattern of farms which tend to be larger.  Roman farming here was stock based in woodland pasture.

Brick stamps of Nero were first discovered in Silchester in 1905. More were discovered in the 1920s approximately 1 ½ miles south at Little London by the Roman road to Winchester, suggesting then that this was a kiln site.

The 2015 Historic England geophysical survey showed the later quarry pit in the middle of the site with kilns around it.  The 2017 excavation revealed both a Roman brick kiln and the production of Roman pottery. Approximately 2/3 to ¾ of the production of the site was tegula, imbrex and flat bricks.  There were also specific productions such as water pipes, armchair voussoir, bessalis, and flue tile.  Relief patterned flue tiles were produced only until the end of the first century A.D. and those produced in Little London have been found at sites in Berkshire and up to Cirencester and Alchester, and down as far as Winchester, Rockbourne, Fishbourne and Chichester, but not at sites to the East.  The Roman kiln site at Minety also produced relief patterned tile which has been found at Bath and Lechlade and other Roman towns in its vicinity.

Given the pattern of distribution of the relief patterned tiles it is suspected that there was a Phase 1 for CBM where it was produced in London and distributed from there.  The kilns at Little London and Minety were later phases.  At that stage expertise in producing CBM had to be imported as it would have been non-existent in the local population.

A Roman road from Poole Harbour via Old Sarum to Alchester by Bob Brewer, BAS

The Roman road from Poole and another from Portsmouth meet outside Cunetio at Forest Hill Farm, a British Oppidum where was an early Roman military presence.  Both go into the Oppidum and are 30 m wide indicating military use.  From here the road follows the Kennet to Littlecote where there is LiDAR evidence for it.  The road doesn’t always follow a straight line, there are rectilinear deviations.  There is a section along the ridge of the Lambourn Downs.  The A338 at Wantage is a remnant of the road.

Military roads between forts and harbours were routed for defence.  They had wide road zones.  They were a fast light build, but quality construction (thin but very solid).

Where possible they were routed on chalk or other free draining soils via short river crossings.  The margins of swamps were used only where necessary.  Wet forests and long river crossings were avoided.

This Roman military road formed both a supply line and a west facing control line.  Critical sections and the vexillation fort at Alchester were built very soon after the Roman invasion by Vespasian when he served as legate of Legio II Augusta.  The Annals of Tacitus detail the Teutoberg forest massacre in 9 A.D. and in 41 A.D. Vespasian commanded a legion in Germany.  From Tacitus and this he would have understood the imperative to construct roads.

SOAG was initially drawn to the site, situated in a clearing on a chalk plateau in the Chilterns, at Highwood, South Oxfordshire, by a mound discovered in 1972 when walking the route of a road which never materialised.  The mound was found to be filled with Roman flint, coins, and bones but this information was never published and remained in the SOAG archives.

We were taken year by year through the excavations (2015-2021) and then through the conclusions.  The site had previously been excavated in the late 18th century as indicated by the 150-year-old beech tree sitting on top of the mound containing Roman flints, coins etc – evidently the spoil from those excavations of which no record has been found.  There was clear evidence of late Iron Age activity on the site.  From tegulae cut outs the temple construction was dated to the 2nd to 3rd century A.D.  The temenos was cloistered.  The outer walls were of good quality.  The temple probably had a floor possibly wooden, or something else which was previously excavated?

The excavation went down to 1.2 m and discovered that in the 4th century A.D. the base of some walls had collapsed into a sinkhole bringing down a corner of the ambulatory and of the cella.

The temple was situated close to a significant Iron Age enclosure, and it may be that the temple site was originally associated with that?

The first talk after lunch was on, ‘Berkshire Roman Project 2’, given by Andrew Hutt.  He began by introducing the Archaeological Society then went on to explain the Outreach Group.  This group was instigated to give people a sense of place and to help explain the amount of data available.  The data extends from the first study, which was called ‘The Archaeology of the Berkshire Downs’, conducted by Richards in 1978, to volume 83 of the Berkshire Archaeological Journal, ‘The Land of the Atrebates: in and around Roman Berkshire’ published in 2018.  The only way forward to sort out and make sense of all the facts was to use IT, so between 2015 and 2021 all the data was digitised using a MIDAS compliant database.

The archaeology of all the sites was recorded at the level of their use always referring to the levels given by Historic England.  A Gazetter has been produced, which consists mainly of a variety of maps.  These maps range in area from the whole of Berkshire to just a few streets and they can easily be reproduced over a period of time, if necessary.  The objectives of the project are:

The method of doing this was to divide Berkshire into a number of regions from which to collect data.  Each area would contain a Roman town or settlement within it.  Many organisations were asked to help, including Reading University and Cotswold Archaeology.  The data is subdivided by other criteria e.g., chronology, burials/cremations, geology, and usage.

These sites all went in and out of use from the late Iron Age to late Roman times.  Farms became villas and small towns developed into urban areas, with clear evidence of economic and military activity.  The data is now presented in the form of essays, each essay containing six maps.  Some participants also give presentations of their findings.

Andrew then outlined future plans; the first step will be ‘Berkshire Roman Project 3’ which will give more explanation of the changes and also lay the foundations of Project 4, hopefully expanding to include the early mediaeval period.

The second presentation of the afternoon was on, ‘Roman Finds’ given by Phil Smither, FLO Berkshire, who explained how Roman sites in West Berkshire could be identified by their finds.  These have been officially recorded since 1997 in response to the 1996 Treasure Act.  There have been over 5000 finds recorded – of these 24 can be dated to the Palaeolithic and 3578 are Roman.

The nature of these finds changes over time so that they can be used to date sites.  For example, Thatcham has been found to be the town which has been continually inhabited for the longest time.   The evidence for this fact is given by a Bronze Age spear then bronze age and iron age brooches followed by second century A.D. coins.  Phil illustrated his talk with some stunning photos, which really brought the past to life.

After a break for tea Keith Abbott from BAS gave a talk intriguingly called, ‘All roads lead to Wickham’.

Ivan Margary mapped and gave numbers to Roman roads in the 1930s.   Margary 41 goes from Cirencester to Silchester.  Margary 53 starts at Bath and heads east, eventually intersecting and joining up with Margary 41.  Keith is trying to find out where this intersection is.

Keith’s interest began in 2020, when he was shown some Roman coins collected by the farmer at Radley Farm.  Keith started to investigate and found evidence that the road from Bath is not where it was expected to be.  Instead, topological surveys of the area highlighted a swathe of boggy ground, obviously not suitable for a road.  Further investigation was needed, so the next step was to try and trace the last section of the road going eastwards, using geophysics.  This is still an ongoing investigation, with much work yet to do.  Keith added that anybody who is interested in joining the project would be most welcome – just drop him a line.

Andrew Hutt then drew the day to a conclusion by thanking all the speakers, organisers, and helpers for making the day a success.  There were no questions.