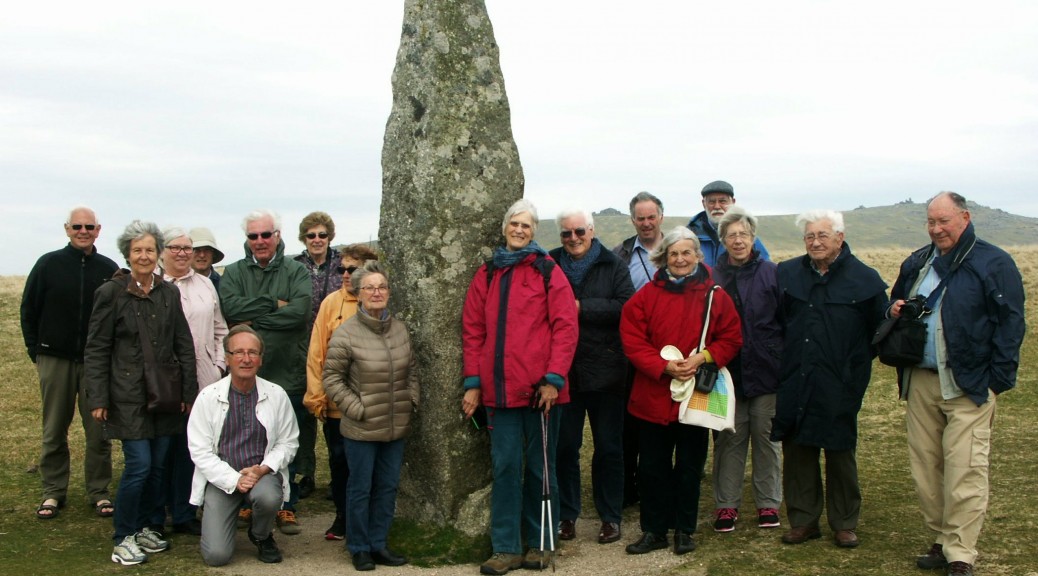 The great thing about Cornwall for lovers of the early tribes of Britain up to the Iron Age is the proliferation of stone suitable for building. This means ritual sites, burials, and dwellings have left significant traces; we saw some of these, for instance, Chysauster village and the Merry Maidens Stone Circle. Cornwall sticks out into the Atlantic which made it ideal for under-sea cables for communication – the museum at Porthcurno covers this. The climate is ideal for apples – some of which get made into cider and not only did we get a talk on cider apple trees we also got to taste lovely cider. There are fabulous gardens including The Lost Gardens of Heligan which we visited. And the farming specialises in livestock hence the clotted cream which we had on scones. Henry VIII needed defendable ports for his navy – the estuary of the Fal guarded by Pendennis Castle which we visited was ideal.

We stayed at a 3-star hotel on the cliff top overlooking the sea. On the way from Reading to Newquay we called in at Glastonbury and Killerton (National Trust). On the way back we travelled over bleak Dartmoor, had a quick look at ritual sites at Merrivale, and later the ruined Muchelney Abbey in Somerset. We had guided tours of most places we visited. The common observation at the end of the Tour (apart from how good it was) was that people could have spent much longer at each place. In spite of our whistle-stop tour there were many places we did not get to see so the trip was a taster of the historical and archaeological sites of the South West of England.

There were 31 people on the Tour and everyone was great company. The places we visited were very photogenic and we had some great photographers amongst us so the photo here (Standing Stone at Merrivale photo by John Harrison) is just one of many. It doesn’t show the whole group but a future newssheet will show everyone.

Next year the trip focuses on Norfolk and we will stay at a hotel on the sea-front of Cromer. Of course, Flag Fen is in Cambridgeshire but we can’t go all that way without going to the museum there. The latest finds from the excavations at Must Farm will also be there. More details of the 2017 Tour shortly.