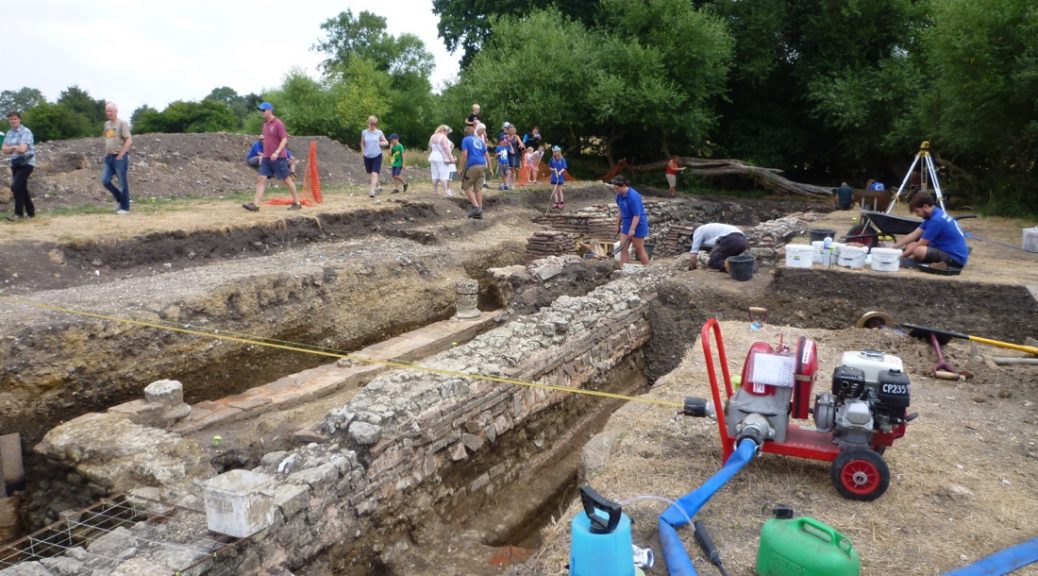 Twenty-five members joined the annual BAS visit to see the University of Reading’s current excavations at Silchester in the midst of the heatwave. It was worth it!

This year excavations have focused on the Roman baths in Insula XXXIII. The baths were first investigated by the Royal Society of Antiquaries in 1903-04 but approx. 80% of the deposits remain undisturbed. The aim of the current project is to learn more about the building itself and what went on inside it. Springs just to the west, which are still flowing today to provide an oasis of green in this summer’s drought, provided the water supply.

A trench had been opened to expose the façade of the baths, which extended more than 40 m to the south. The front wall of the baths had been provided with a columned portico, the bases of three of which could be seen. The wall itself was very well-preserved with over 1 m still standing owing to the ground level in Roman times being continually raised in order to avoid flooding. The column bases, which were subsequently buried, belong to the first phase of the building dating to the AD 50s-60s. The upper surface of the adjacent street, which was laid down at the start of the 5thcentury, is about 2 m above the level of the column bases.

The baths were later extended and a large latrine was constructed on the east side and the massive arched drain leading from this has been exposed in the side of the trench. The actual water channels that supplied the baths have not been fully explored but an earlier arched water channel and some preserved alder wood piles have been found underlying the building. It is assumed that there were holding tanks to ensure a constant water supply. The central entrance through the portico was modified as the ground level rose to cover the base of the columns, and this lead into an open courtyard, the palaestra.

The baths are special because of the extent of their preservation, and the use of greensand blocks imported from the Weald and fine limestone from quarries at Painswick in Gloucestershire. The first phase of the baths represents one of the earliest Roman-style buildings to be erected in Britain and it lies just within the Iron Age settlement area. The bricks had been made in the kilns at Little London in the 50s-60s, contemporary with the Nero-stamped tiles found elsewhere at Silchester. Viewed from the south, the trench exposed some large blocks of cemented gravel used to construct the wall of the later latrine. Another colonnade ran inside the palaestra, the ground level of which later rose to about 1 m above the base of this colonnade.

The channelled hypocaust of a possible tepidarium or warm room, which was a later 4thcentury addition outside the original east wall of the baths, was exposed in a separate trench that also included some of the deposits that had accumulated on the east side. The hypocaust was formed of massive concreted blocks with an ‘open’ space in the middle where there were a number of brick pilae to support the floor. The furnace area, now heavily robbed, was in the north-east corner and would have supplied the hot air that warmed the centre of the room (the hottest part) and then passed along the channels to the walls where a gap could be seen that originally housed the hollow flue tiles that would have carried the heat up within the walls. Lots of opus signinum was found in different phases of the baths. To the east of the tepidarium there was an enormous ditch representing the inner Iron Age defences and coring has shown this contains 3-4 m of deposit which is waterlogged at the base – this area has been ear-marked for excavation next year. The deposits will (hopefully) contain the accumulated rubbish generated by the bath users over a period of some 400 years.

Finds so far include lots of bone pins, finger rings (including a rare gold one), fragments of bracelets – but no strigils or oil bottles. Much of the upper ditch fill is post-Roman in origin and results from disturbance and centuries of cultivation. The walls were heavily robbed in medieval times. The later east wall was constructed of flint and brick with the occasional greensand block. Nearly 10 tonnes of CBM have been recovered so far with more to come! A discrete little pile of oyster shells exposed near the tepidarium provided a clue to what people liked to eat whilst in the baths.

It is possible that the baths site came within the edge of the medieval village which was centred between the church and the amphitheatre at the time of Domesday in the 11thcentury. There was another set of baths, at the mansio by the south gate, and together these baths would have served the whole town. The population has been estimated at around 5000, although the amphitheatre would have seated 7500. Silchester was at its peak in the 1stand 2ndcenturies, after which it has been ‘downhill thereafter to Brexit’ according to Prof. Mike Fulford, who kindly showed us around the excavations and explained their findings to us.