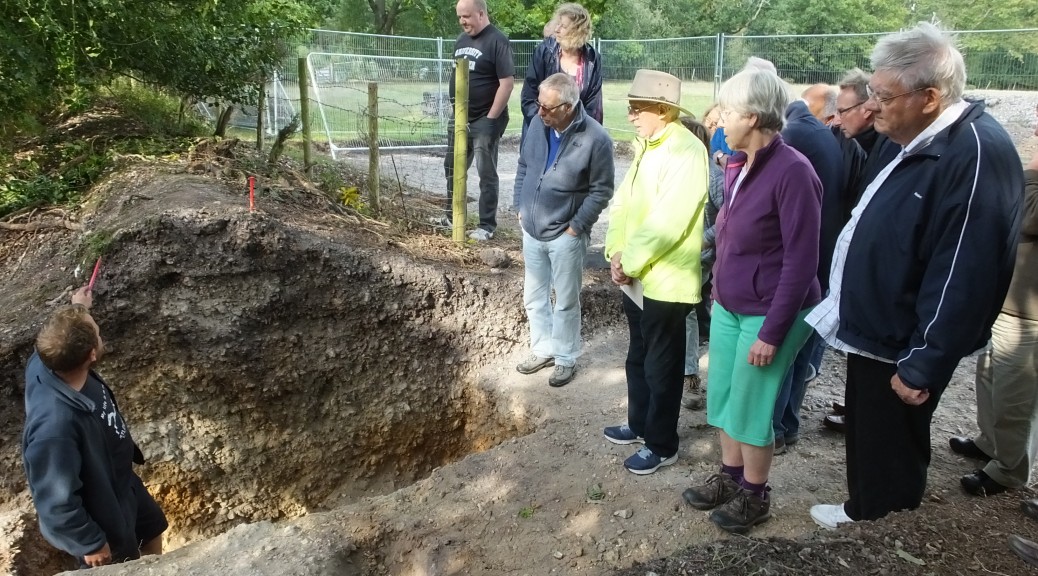 On Wednesday September 9th Professor Michael Fulford gave around 30 members of BAS and BARG a talk on site at Silchester Insula III.

In 2013 and 2014 the south-east corner of the insula was re-examined.  The Victorian archaeologists thought they had found a bath house here.  However, re-examination has shown that they muddled the early and late Roman remains.

Since the current excavations started evidence of a first century town house has been found along with tiles bearing the stamp of Emperor Nero.  This town house extends beyond the borders of the 900 square metre trench which has been opened.

The current excavation area was covered by the spoil heap from the 1860s excavation of the forum   basilica.  The overall town project took place in the 1890s.  The forum was back filled in 1909.
Consequently in 2015 it is difficult to find the limits of the extensive Victorian excavations.  The Victorians thought the most economical way to find the remains of Calleva was to dig diagonally.  Then, when they found walls to follow them, removing spoil from the interior.  It has taken two weeks to dig out the Victorian spoil.  There are no traces of the buildings and the walls in both the south-east and north-east corners.

The team is trying to understand the archaeology by excavating down to get the profile.  Sondages have been made going down as far as the Iron Age levels.  On the east side there is evidence of late Roman occupation.  On the north side evidence seems to indicate a well.  Gulleys flanking the east-west street have been found.  Behind them are two phases of wall and further back evidence of post bases and a timber framed structure.  A large piece of masonry from the forum basilica has also been uncovered.  On the south side a well preserved horse shoe hearth structure has been found.

There is a charcoal rich horizon dating to the mid to late first century A.D.  Evidently it was a big event as it has been found both here and in Insula IX.  The archaeology shows that there was a major re-organisation of the town afterwards to the classic Roman grid plan.  However, the archaeology cannot tell us whether this was an accidental urban fire or whether, tantalisingly, Boudica was involved.  Nor can it tell us whether there was an overarching scheme for Insula III  and whether this was part of a town plan for Calleva in the mid first century A.D.

There are dark soils which merge into the plough soil.  Professor Fulford’s explanation for this is that there may have been occupation of the site beyond the end of the Roman occupation of Britain.  But no coins have been found to date these dark soils.  This is not surprising as this is a period of no real material culture.  However, the Ogham stone, found in Insula IX is indicative of this immediate post-Roman occupation.

Adam, a PhD student, then showed us some of this year’s finds.  Most of what has been found is from the back fill from the Victorian trenches including; a flagon; Samien ware, a piece with a lead rivet repair, and another piece of South Gaulish origin; Cream of Oxfordshire ware, two pieces of which had superficial stamps; New Forest ware; Mica dusted ware; Speicher ware from Rhineland-Palatinate, Germany; bones, some of which had butchery marks; some slag, indicating that manufacturing had taken place on this site; a copper alloy horse harness piece which was still uncleaned; a rotary quern; ceramic roof tiles, dating from the 1st and 2nd centuries AD, after this the fashion was for stone roofs.

Carolina showed us the small finds.  Many were from the Victorian backfill and, consequently, their dating stratigraphy had been lost.  They included; coins, many of which were of low value and dated to the 3rd and 4th centuries AD; a ceramic coin mould; four finger rings, including one with a missing intaglio; a shale bracelet; bone hairpins, which would easily have been missed by the Victorians; a knife, probably with a wooden handle; an iron stylus.

Pond Farm Hillfort is one mile north-west of Calleva, on the Englefield estate owned by Lord Beynon.  We split into two groups to be taken there by minibus.  The work being done there is part of the 5 year Silchester Environs  Project, looking at the Iron Age environment to put the oppidum into context.  The project covers 120 square kilometres.  As this is such a large area much of the project is desktop based.   Many of the interesting sites are wooded, so use has been made of Lidar surveys.

The aims of the 4 week excavation at Pond Farm Hillfort are to date it and work out its’ relationship to Calleva.  As time is short and the site large it has had extensive geophysical surveys.  It is also currently very heavily forested, the tree line following the ramparts.  The site is at risk from roots, rabbits and badgers.

Flints may indicate early Bronze Age clearance of the site.  There is also an outer, shallower, pre-historic ditch.

The fill sequence suggests that the Iron Age enclosure trench filled up quickly.  There is post hole evidence that it was palisaded.  However, there is no material culture giving evidence of occupational settlement.  The trenches are 1.9m deep and the bank 3m high, indicating that a lot of investment was put into its’ creation.  The evidence indicates that it was not occupied by people, so was it used for the wealth of the era, their animals?

The entrance is H-shaped due to the trees.  There is an extra 15m bank with a ditch in front.  The entrance trench shows evidence of being cut down to the natural and then built up.  A late Iron Age beaker found quite low down may be good dating evidence.  However, samples from the ditches will be radio-carbon dated.

There are signs that the trenches were recut, indicating that the site was later re-used.

There is also evidence of post-medieval activity in the form of a drain, a peg tile and a piece of bottle.  There are also a few clay-lined pits filled with charcoal, which may be indicative of small scale seasonal charcoal working.

Thanks to Trevor Coombs for arranging this very interesting visit.