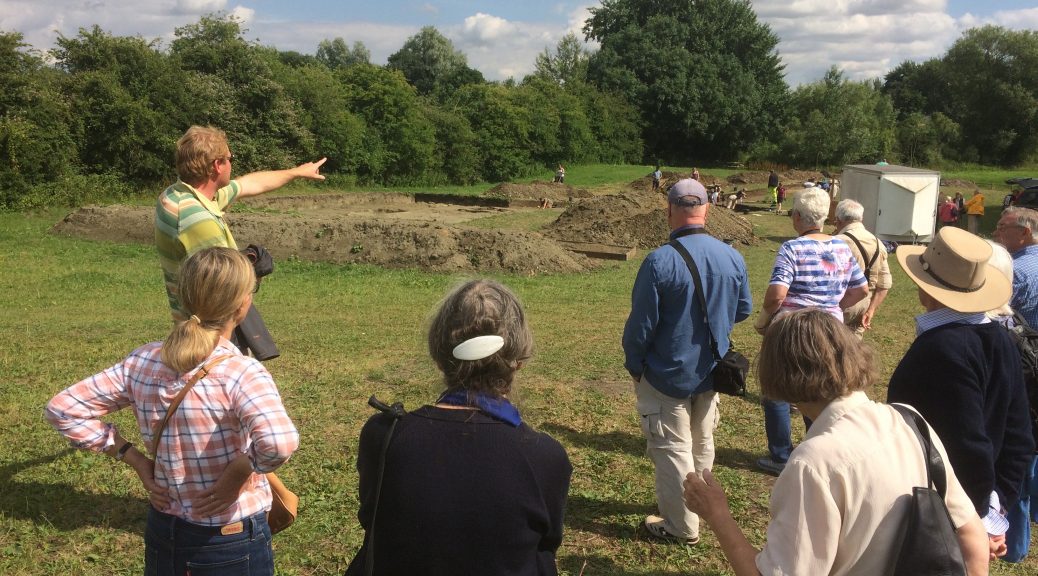 A party of ten members travelled to the HQ of Wessex Archaeology to hear about their latest largescale excavations and then on to Marden Henge and a newly discovered Long Barrow being excavated by Dr Jim Leary of the University of Reading.

Wessex Archaeology have excavated two MOD sites, one at Larkhill and the other at Bulford, Wiltshire, prior to houses being built for soldiers and their families returning from Germany.

Larkhill was the site for training Commonwealth and British troops in trench warfare before and during WW1. The men had dug trenches and tunnels to a depth of 2.5m in which to practice. Wessex Archaeology excavated 8.5km of the trenches to check for Neolithic remains and to find clues about how soldiers had lived in them. They did not excavate in vain. Apart from the Army issue of enamel mugs and plates, there were all sorts of ‘comfort food’ remains. Toffee tins from Melbourne, Australia, and Mackintosh and Pascall from Britain were there beside jam jars (from W.P. Hartley Ltd) and pipes and tins that held tobacco, cigarettes and cigars. Corned beef, sardines and golden syrup were favourite foods, whilst Whiskey, beer and lemonade were soldiers’ choice drinks.

Tunnels were dug to create command and medical centres, and often to undermine enemy positions and blow them up. Miners and sappers who had dug these tunnels at Larkhill had left their names inscribed on the walls. Wessex Archaeology are currently researching the military careers and lives of the men to be published later. Perhaps the most unexpected item was the old MG car which had been dumped in one of the trenches.

Bulford excavation did contain some archaeologically important finds. This was a large area that had been stripped of topsoil, which immediately showed a Saxon grave yard of 150 inhumations and two henges c. 25 m across close together. 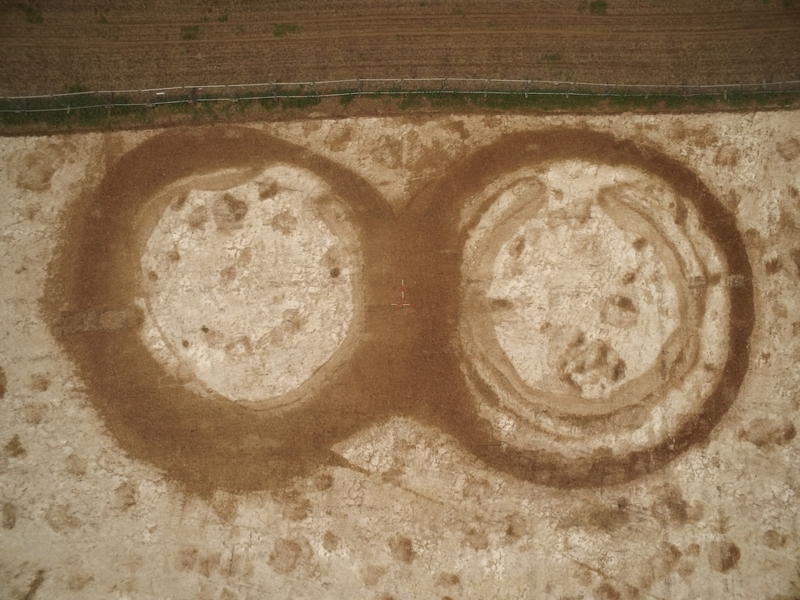 This is the first time that two henges have been found so close together. On examination they were confirmed to be Early Bronze Age round barrows which had been ploughed flat. The ditches contained stone and flint axes and a fine disc–shaped knife. The most interesting find was a chalk block which had been hollowed out to make a bowl. There were bones of Red deer and Aurochs (later to evolve into modern cattle) that had been used for digging. One ditch had a wolf or dog’s skull deposited, which might have been used in a ritual. Finds from the Saxon graves were equally exciting. A complete bronze spear head came to light in a male grave, and from the female graves came polychrome glass beads, a decorated comb, and a bronze cylindrical work box complete with a lid and small chain.

Note: for pictures of these artefacts search for Wessex Archaeology’s blogs on Larkhill and Bulford.

After lunch we all moved to Marden Henge. Dr Jim Leary met us and we climbed into the mini-bus to be taken to his latest excavation three miles away on Cats Brain Hill (SU 121636) where he had found a ploughed out Long Barrow. The topsoil had been removed to reveal two wide ditches forming a ‘U’ shape and within was the rectangular outline of a Long Barrow. Jim believes it is from the Early Neolithic, possibly dating to 3,700 BC. There are no internal stone slabs to divide the barrow into ‘rooms’ as at West Kennet Long Barrow, but Jim thinks the builders may have used wood to partition it and support the soil heaped on top. The monument is indicative of social change which happened in Britain about 4,000 BC. New settlers had come from the continent and started farming here, which meant they largely ceased to be itinerant hunter gathers and colonised the land close to their farms. Naturally they memorialised their dead close by, burying them in communal graves. 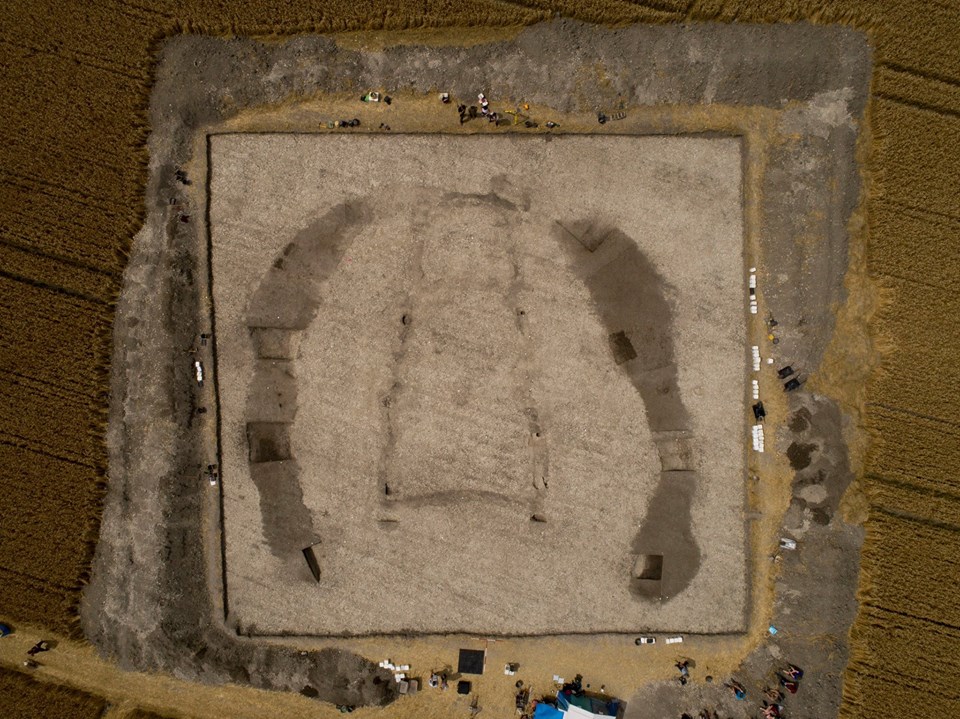 We returned to Marden Henge (SU 091584) which is astonishingly large at 15.7 h. It has a continuous bank and ditch and up to 1818 contained a 15m high mound in the centre. Additionally it contains a mini-henge which was first excavated in 2015. At that time a building with bone needles, flint flakes and Grooved ware was found containing a large fire place with burned cobbles from the nearby river Kennet. It was proposed that it might be a ritual sauna for visitors to the site. Opinion has been revised and it is now considered to be a house like others around the henge. Before the excavation closes  the students are sectioning the long enclosure bank to see how it was constructed.