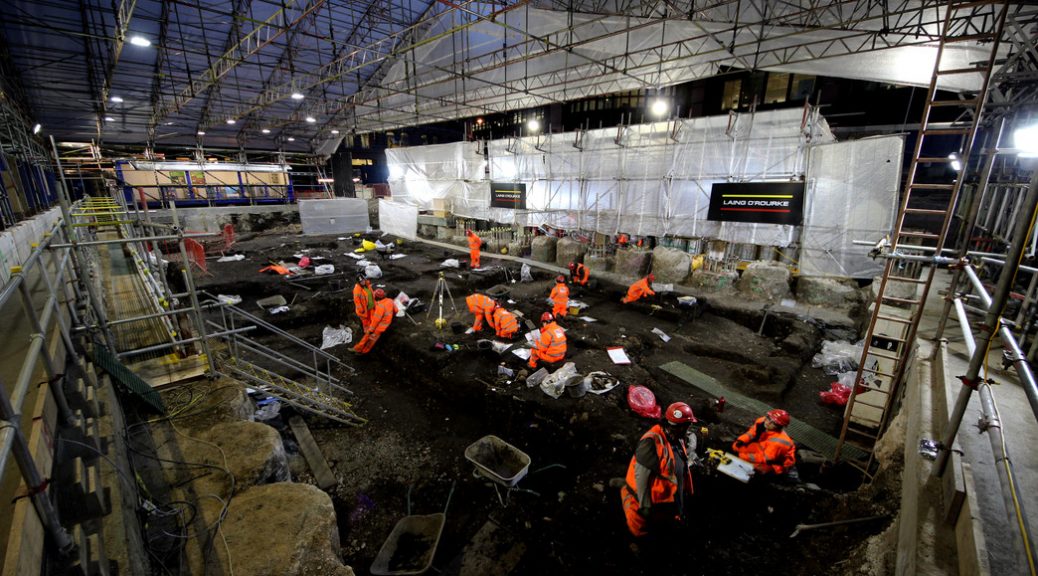 Beyond London’s Walls: Recent excavations at the site of the Crossrail Broadgate Ticket Hall

A talk given to BAS on Saturday 8th April 2017 by Robert Hartle, Senior Archaeologist, MOLA (Museum of London Archaeology)

Robert is a senior archaeologist with MOLA (Museum of London Archaeology) who had the task of managing the excavation of Broadgate ticket hall from 2011 to 2015 for Crossrail. The site is outside the Roman city walls and started as a cemetery c. 120 AD. The Roman levels are about 6 m below the present street level.

Roman burial grounds are normally found outside town walls and this was no exception. MOLA discovered 120 coffins neatly arranged in rows with a service road, wheel ruts and drainage ditches which deposited water into the nearby River Walbrook. South of the road were three decapitated bodies with their skulls between their knees. A further seven decapitated bodies were found north of the road, one with a shackle around his arm. 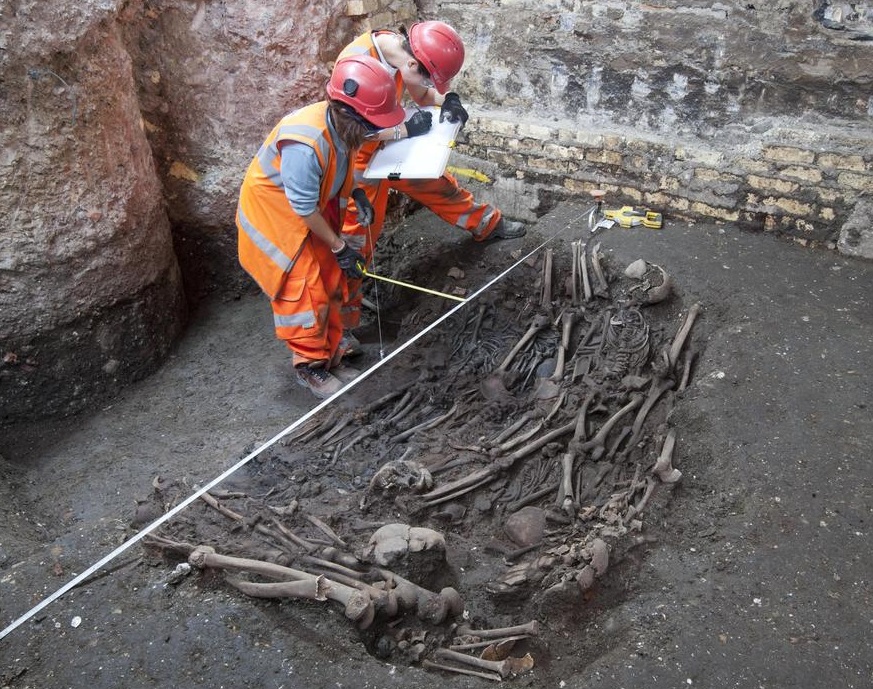 After 400 AD the site appears to have been deserted until 1247 when the Mayor of London founded the Priory of St. Mary of Bethlehem. The monks were devoted to healing sick paupers. Londoners called it ‘Bethlem’ which later became ‘Bedlam’. In the first half of the 15th century the priory acquired the area for its own grounds.  By 1550 the area was known as ‘Moor field’ which often flooded due to the clogged-up state of the river Walbrook. Mediaeval bone skates were found, suggesting it was used in winter as a skating rink.

The archaeology from the 16th century indicated that people were leaving the site to go on pilgrimages to Our Lady of Walsingham, Norfolk and Our Lady of Willesden as pilgrim badges from the two destinations attest. Someone had lost a gold Venetian ducat issued by Doge Leonardo Lordan (1501-1521) showing the Doge kneeling before St. Mark. Other domestic articles included curry combs, shoe buckles, purses and spoons. In 1569 the area became a new church yard for Bethlehem church. At its centre was a pulpit with a roof and a flag on top. The main use was for the priest to preach the Whitsun sermon, when thousands of people. The churchyard became a popular place for Londoners to be buried from all the city’s parishes. The burial ground keepers were the Clitheroe family who had a house in the yard. Whilst paid to dig graves and maintain the churchyard, they had their own business, that of wood turning with a workshop and retail counter. Business flourished and they managed to persuade the church officers to enlarge their premises. However they kept no burial records and were reprimanded twice for not doing so. The burial ground was in use until 1738 and by the time of its closure, 25,000 bodies had been interred. MOLA estimate the density of bodies to be 6-8 burials per cubic metre. Examination of some of the bodies disclosed the diseases which killed them. People had suffered from rickets, syphilis and plague. The years 1625 and 1665 were big plague years and forensic archaeologists found the DNA of the plague bacteria, Yersinia pestis.

Burials made during the 18th century had an interesting feature. They had the initials, birth and death dates put on the coffin lids created in brass studs. MOLA recruited 16 volunteers to scour the parish records to create a list of people living at the time, so that the people in the cemetery could be identified. This was so successful that not only did occupations and addresses become known, but family trees could be constructed for some individuals. A particularly good example was the family of William Welwyn, whose family tree showed a relationship with John Williams, Bishop of Chichester. Some of the coffins from the early 18th century were found to be empty, indicating that body snatchers had been at work. The site had been in use from the early 2nd century until 1739 as a burial ground. Future travellers on Crossrail will be blithely unaware of their ancestors as they flash through Liverpool Street station.