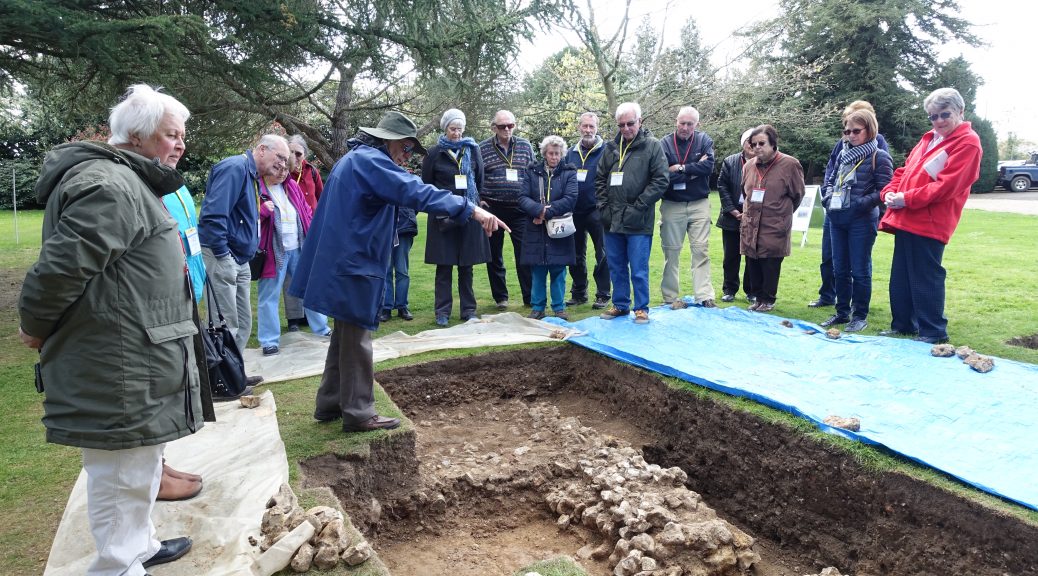 In three weeks from 3rd to 20th April a team from the Berkshire Archaeological Society excavated five trenches at Blounts Court.

The objective of this work was to gain dating evidence for building R8 with its chalk floor and chalk block foundation and for the mortared flint wall with its radio carbon dates of40 BC to AD 27, AD 125, AD 305 to 406 and AD 887 to1013.

The first two trenches 3B and 3C were re-excavations of parts of trenches 3 and 3A to reveal the archaeology of both buildings.

Trench 5 was then excavated to find dating evidence of building R8.  This was successful insofar as we found more pottery and a knife which confirmed that is was a medieval building.  A review of manors dating to this period suggests that this was a manorial hall probably contemporary with Blounts Court house which has a dendro-chronology date from a floor joist of 1430.

Trenches 6 and 7 were dug to investigate the mortared flint wall.  A careful analysis of the radio carbon dates showed that these were dates when the mortar used to build the wall first dried out and absorbed carbon dioxide or at a later date when the in-situ mortar got wet which reset the carbon dioxide clock.  The excavations revealed a 4m length of the wall which showed that it had been built in sections each of about 4 Roman feet.  There is no evidence of this wall being part of building so, for now, it is thought to be a boundary wall.  Many villa sites are surrounded by walls like this.   To the east of the wall was a deposit of tile and debris which contained tile fragments and a horse shoe of medieval date.  This evidence suggests that there was a medieval building which used the Roman wall to support its western wall.

The next steps on this site are to finish processing the finds, to write up the work so that it can be published in the Berkshire Archaeological Journal and to produce an exhibition to display at Johnson Matthey’s 200 birthday celebrations.