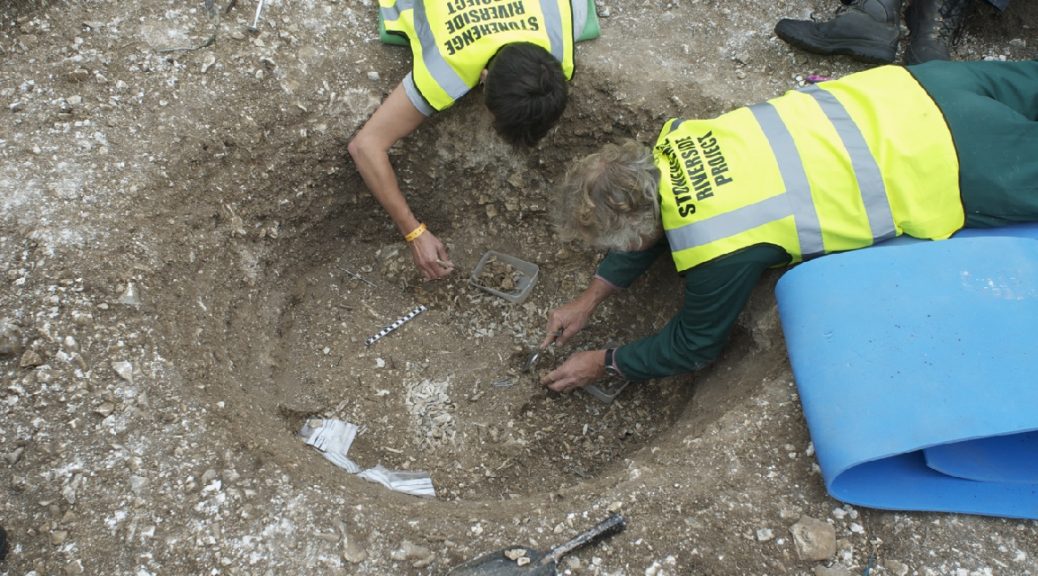 Until fairly recently, the construction of Stonehenge was shrouded in myth, a popular story being that it was built by Merlin with the help of giants. We now know that it is a multiphase site that was remodelled over several hundred years. Four major phases have been identified:

Experimental archaeology has demonstrated the amount of organisation and manpower that would have been required to build Stonehenge. Its construction would have been a statement of power, raising the question as to who was in control: no single person, since the process took centuries to complete. The bluestones have been sourced to the Preseli Hills in Pembrokeshire. An outcrop at Craig Rhos-y-felin shares the same geochemistry and a quarry mark matching one of the Stonehenge bluestones. Three routes have been proposed for their transport to Stonehenge: a lengthy coastal route around Cornwall and up the Hampshire Avon; a coastal route along South Wales, across the Bristol Channel and up the Bristol Avon with porterage across to the Hampshire Avon; and a more northerly overland route. An experiment to test the second of these proposals failed and the inland route is now thought to have been the most likely, following an ancient pathway used for moving cattle. Why the stones were moved has not been resolved: were they attributed with healing powers?

The ratio of certain stable isotopes of calcium and nitrogen in skeletal remains can provide insights into a person’s diet; oxygen and strontium isotopes can be matched with the environmental ratios found in different geographic areas to determine an individual’s movements. Ultimately derived from the bedrock, these isotopes enter the ground water and are taken up by plants and animals – and by the humans who drink and eat them. Strontium is taken up by bones and tooth enamel; whereas bone is continually recycled and can only provide a record for the last ten years of life, tooth enamel remains unchanged and is formed during childhood. Isotope analysis of the ‘Boscombe Bowmen’, a multiple burial dated to 2400-2200 BC from the Stonehenge area, showed that some individuals were local in origin but others had come from west Wales.

Using a strontium ‘isoscape’ map of the British Isles, the analysis of pig and cattle teeth from Durrington Walls, where the builders of Stonehenge probably lived, suggested that some had come from as far afield as Scotland. Evidence for large-scale feasting at this site implies the need to import livestock from a wider area, but whereas cattle can be driven over long distances, pigs are less amenable. A recent update for the isoscape map now links the pigs with the Black Mountains in Wales and the Malvern Hills, not necessarily Scotland but still a fair distance.

Some of the Aubrey Holes were excavated by William Hawley in the 1920s, who found many of them contained cremated human bone. Ahead of his time, instead of discarding this material he reburied it, albeit as a jumbled mass, in Aubrey Hole 7 where it was later rediscovered. The Aubrey Holes are about 1 m across, probably too big and too shallow to have held timber posts, and crushed chalk at the bottom suggests they originally held bluestone-sized stones. After the stones were removed, the holes were re-used for cremations. Among Hawley’s material, 28 identical cranial fragments provided a minimum number of individuals although probably more than 50 people were represented. Hawley did not excavate all the Aubrey Holes, which overall may contain the cremated remains of more than 100 individuals. These have been radiocarbon dated to 3000-2800 BC and represent a very rare survival of Late Neolithic cremated remains.

Cremation shatters tooth enamel but fortunately calcined bone is a reliable substitute. Isotopic analysis of 25 individuals showed that 15 were local and the rest had come from west Wales, some possibly from a wider area in western Britain and even Ireland, within the last ten years of life. Intermediate ratios suggested some individuals had arrived at Stonehenge within five years of their death. Hawley noted that some of the cremated bones appeared to have been buried in leather bags and so could have been cremated elsewhere. Cremated bone absorbs the carbon signature of the wood used for the funeral pyre and a study of the stable carbon isotopes suggested that some wood was local in origin and some appeared to have come from a densely wooded area like west Wales, implying some individuals had been cremated elsewhere and their remains brought to Stonehenge for burial. The bluestones are the link between west Wales and Stonehenge. The cremated bones are of men, women and children and may represent leading families associated with this long-distance movement of bluestones.

Isotope analyses and genetics have given support to the discredited mass-migration theories of Gordon Childe and other past archaeologists. The Mesolithic population of Britain was almost totally replaced by Neolithic farmers who originated in Anatolia, and they in turn were replaced by the Yamnaya (Early Bronze Age) people from the south-east Eurasian steppes. Genetic profiles of the modern British population show that most of us are descended from the Yamnaya, with just a small proportion of Neolithic genes and an even smaller proportion of Mesolithic genes.

Image: Cremated human remains being excavated from the base of Aubrey Hole 7 by Jacqui McKinley and Julian Richards. The bone fragments were deposited in this re-opened pit in 1935 (photograph Mike Pitts)