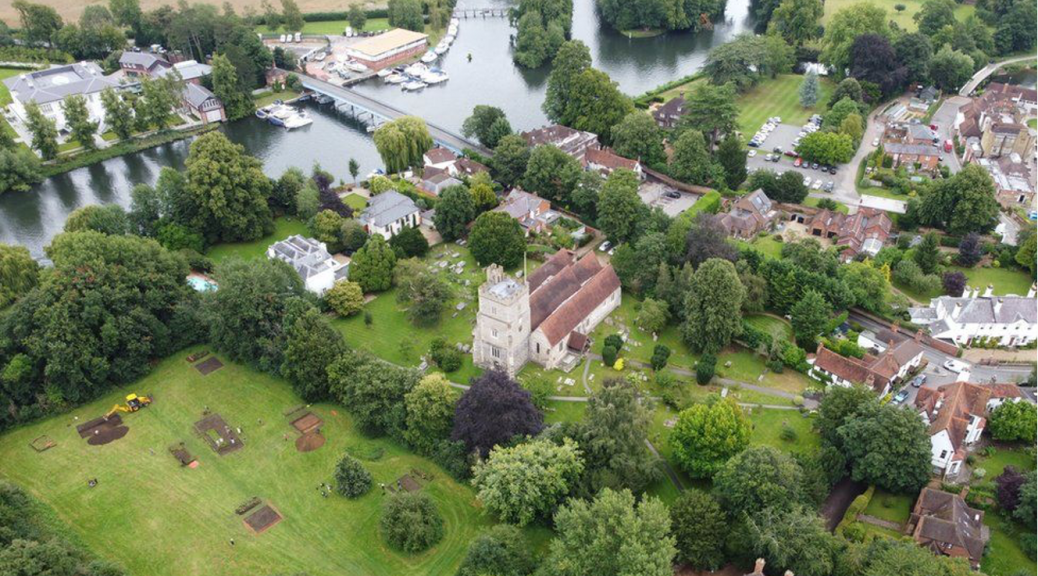 A fundraising talk hosted by Maidenhead Archaeological and Historical Society (MAHS) and given on Zoom on Wednesday 26th January by Dr Gabor Thomas to members of all local societies which form the Middle Thames Archaeological Partnership (MTAP).

In Anglo-Saxon times the Thames was a conduit for goods, ideas, and knowledge.   In the Upper Thames area around Oxford and Dorchester Anglo-Saxon cemeteries are full of grave goods, often containing exquisite Kentish items, reflecting the hierarchy of the Anglo-Saxon kingdoms at the time.

In the 7th and 8th centuries A.D. the kingdom of Mercia expanded south.  So that by the time of the reign of King Offa (757-796 A.D.) its southern border extended to the Thames and then east to London.  Consequently, the Thames had become crucial in the 8th century A.D. geopolitics between Mercia and Wessex.

According to historical sources by the end of the 7th century A.D. a series of monastic settlements had been established on the Thames.  However, given limited archaeological excavation the quality of information about them is poor and uneven.  Unlike nowadays monasteries in this era were fully engaged with the wider world and trade.  They were both established and run by well-connected people.  So, to be fully functional they needed to be highly connected, which the traffic and trade along the Thames provided.

Founded by royal families and treated as family assets, in northern Europe the monasteries were a driving force behind Christianisation.  They were centres of religious life, pilgrimage and spirituality, learning and culture, and either mixed or single sex communities.  They were also major landowners active in production and trade.

Between 740 and 757 A.D. King AEthelbald of Mercia gave Cookham minster to Christ Church, Canterbury in a geopolitical move to control the Thames.  After 760 A.D. it was annexed by King Cynewulf of Wessex and in 779 A.D. it was captured by King Offa of Mercia.  In 798 A.D. Cookham was ceded to ‘Abbess’ Cynethryth, Offa’s widow in return for 110 hides of land (approx. 13,000 acres) in Kent.  As the mother of Offa’s successor, she was crucial to secure power going down Offa’s line.  She was also a woman of some importance being the only queen in Western Europe to have coins minted in her own name at this time.  Later in the Viking era a Burghal Hidage fort was built on Sashes island to the north in a strategic attempt to control Viking progress up the Thames.  In 990 A.D. King AEthelred II held a witan at Cookham, indicating that it was still an important royal holding then.  But by the Domesday book (c. 1086 A.D.) Cookham minster is listed as having only 2 hides (approx. 240 acres), a common theme in Anglo-Saxon monasticism.

Prior to the 2021 excavations QUEST, an agency of Reading University, conducted a palaeoenvironmental survey, coring to map the geology and morphology of the site.  It determined that Holy Trinity church and the core of Cookham lie on a gravel island.  Indicating that the Anglo-Saxons built proud of the flood plain.  The harbour in the paddock hinted at in the 2005 excavations was proved to be an inlet but is most probably Mesolithic in date and had probably silted up long before the Anglo-Saxon occupation.  The magnetometry survey showed lots of disturbance at the top of the paddock, but the rest was not that promising, although a couple of faint linear signs turned out to be very important.  Magnetometry is not suitable for this site and the plan is to conduct both resistivity and ground penetrating radar surveys this year (2022) to sharpen up the geophysics.  Six pilot trenches were opened in 2021 to sample some of the indistinct features as there was not enough time to look at 100% of them.

Trench 1: Revealed a north-south ditch, intercutting pits, a metalled trackway, a flint pad which may have been a support structure for a timber building, hearth material and domestic refuse, all of which were firmly Middle-Saxon.

Trench 3: Revealed a large midden, more postholes, and an in-situ hearth with evidence of metal working.

Trench 4: Contained some sherds of pottery, some bone, an iron suspension ring, and an east-west ditch which may have been a boundary or a water channel.  On site water management would have been necessary.

Trench 5: Revealed part of a human skull and some other human bones and an east-west ditch which had been recut indicating that it had been a long-lived boundary.

Pottery: Mainly locally produced organic tempered wares with some imports from other parts of England and near mainland Europe, dating the settlement to the 8th-9th centuries A.D.

Coinage: Some Sceatta, which are silver coins, minted by the Frisians and Anglo-Saxons.  Their presence indicates the site may have been a centre of trade.

Dress accessories: Dominated by bronze pins which would have fastened delicate veils.  A delicate bronze bracelet was also found.

Iron tools and fittings: A suspension ring, an axe head, a knife, a saw blade, nails, and various fittings.  Given the ironworking slag it is likely that some of these were produced on site.

Other/small finds: Bone combs and window glass.  The latter was pioneered in Anglo-Saxon monasteries in this period.  The small piece of green glass is the first discovered in this area.

The artefacts were very comparable to those found during the excavations at Lyminge, Kent.

The full report had not been received.  However, initial findings indicated that the species representation was unusual.  It was dominated by pig, which is for consumption only as you can’t do anything else with it.  The presence of deer bones indicates the elite pastime of hunting.  Both meats give the site a clear high-status signature.

The areas investigated to date show both domestic and industrial use and are clear evidence for a busy Anglo-Saxon settlement.  However, to date only keyholes into the archaeology have been investigated raising many more questions, such as, ‘What was at Cookham prior to the monastery?’, ‘What were the Anglo-Saxon churches in this area built with?’.  There was Roman influence in Kent where they used stone.

So, there is an exciting agenda to build around this site, not just for the immediate area but by linking it to other parts of England and Europe.

Cookham Abbey is likely to be the focus of MTAP work for the next three years.  The plan is to excavate the whole site for which a minimum of £60,000 is needed and donations are welcome!

You can now download the PDF of the interim report on the August 2021 excavation at Cookham Church Paddock at:

Gabor’s 20-minute interview to Time Team on the 2021 excavations at Cookham Church Paddock: