In December 2019 I gave a short talk to the society about the history of our logo. I had been working on a re-design to modernise it and make it more suitable for a variety of media. The new design is launched at the beginning of April 2020. The following is a version of my talk.

My research is mostly drawn from examining the covers of the Berkshire Archaeological Journal that are held on the Archaeology Data Service (ADS). 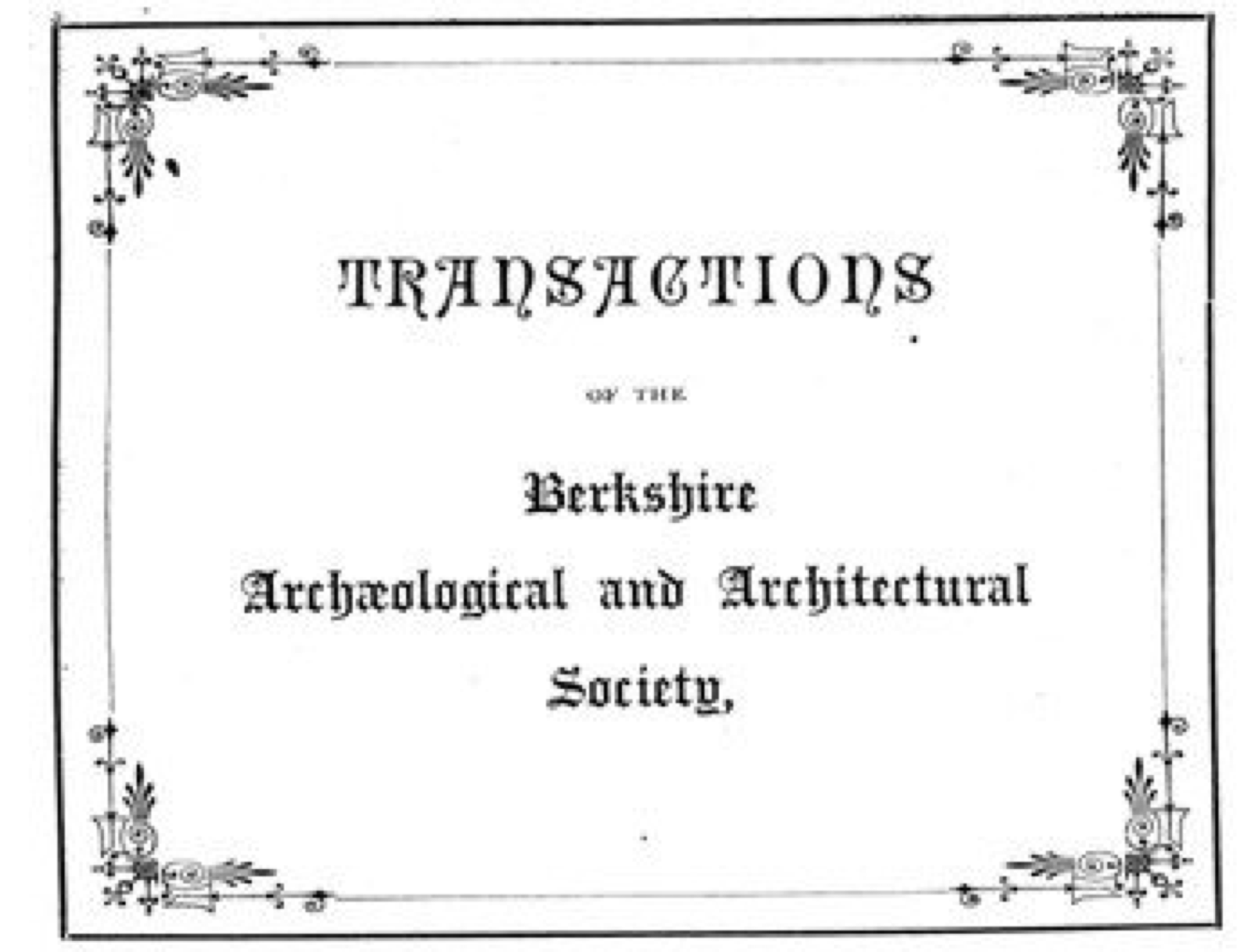 The Berkshire Archaeological and Architectural Society was founded in 1871. It was always a charitable organisation but was not officially registered as such until 2006. The earliest journal on record, from 1879, has an ornamented border with the name of the society in a Gothic font. Both were popular at the time but the use of a historic font was doubtless intentional. Note the inclusion of the word “Architectural”. Our current constitution states that: “The Society’s objects are to advance the education of the public in the fields of archaeology and history in the past and present county of Berkshire.”  However, despite our continued interest in historic buildings, “Architectural” was dropped from our title some time between the wars.

By 1893 the journal cover had acquired a fine drawing of the Reading Abbey Gateway. This was not just an example of local heritage but was actually the home of the Society. By this time it had been almost totally rebuilt by Gilbert Scott after collapsing in a storm in 1861. BAS continued to meet in an upstairs room until stones from the front started to fall off in 2010.  At this point Reading Council acquired the building and finally restored it in 2018. It now forms the logo for the Abbey Quarter heritage area so we cant go back to using that!

In 1943 the journal sported a brand new logo – probably designed as a woodcut. The typeface goes back beyond Gothic to a medieval style. Strangely it rotates around the circle so that half of the lettering is upside down. The iconography is interesting:

The central form is a quatrefoil – literally four leaves. As well as being a symbol of good luck it was often used in Gothic window tracery. Inside is the famous Uffington White Horse. Unfortunately it is now just over the border into Oxfordshire, or what we have called since 1970 “occupied North Berkshire”! However, it is still within the study area that we use to investigate sites and communities that are relevant to what has been going on in Berkshire for the last few millenia. We have, therefore, been reluctant to part with it. Above is the sky with fair weather clouds and below is water, representing the Thames and Kennet that flow through our county.

In 1960, the old logo was probably thought not to suit the modern emerging age of “Swinging Britain”. The White Horse (still in Berkshire!) was retained in a simple oval but the rest of the design was discarded. We still use this on the cover of the journal and it has also been retained by the Berkshire Archeology Research Group (BARG).

In 2002, to mark our 130th anniversary, a distinguished member of the council presented the society with a hand crafted plaque based on the 1943 logo. We believe that this was created by someone with a background in heraldry and it is a cherished possession that you will have seen exhibited on the entrance table ever since. As a first use of colour for this logo it accurately conveys the image of the White Horse on its green hillside with blue sky above and deeper blue river below. The gold lettering is handsome and the fleur-de-lys add a splash of red. There are some strange errors in translating the interface between the hill and the cloud and the horizontal lines are a bit shaky!

The first attempts to translate the plaque into a logo for BAS publications looked acceptable at small sizes but I found that they didn’t scale up well once I started to design banners and posters. Therefore, I recreated the design to make it more legible and scaleable while keeping as faithfully as possible to the old woodcut. The Council then decided that this was an excellent opportunity to go further and update the design for the 21st century.

We considered some radical alternatives but decided to retain the Uffington White Horse that we love so much, and the roundel with the name of the society. The old quatrefoil has been replaced by a simple circle and the woodcut effect removed. The typeface now matches our other publications. In recognition of the Iron Age symbolism of the “sun horse”, the rising sun now shines above the hill. Below it the ripples of our rivers flow past, with just a hint of the crescent moon.

We hope you like it and are looking forward to seeing it on publications over the next few years.