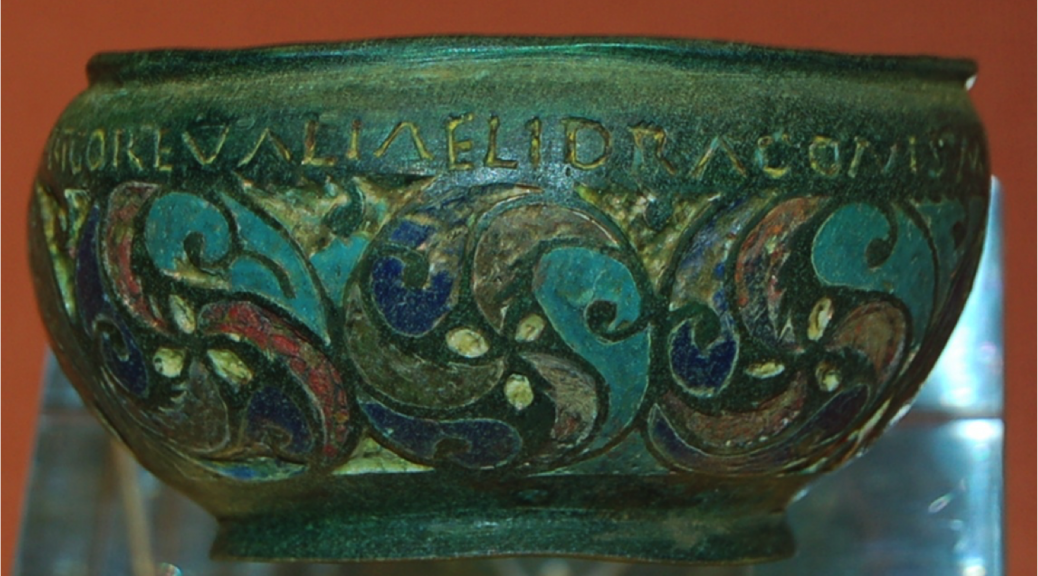 How did they make those beautiful things?

Justine Bayley explained the intricacies of Romano-British non-ferrous metalworking to a crowded meeting room at RISC on 21 January. She whetted our appetite first by showing us some priceless examples: the Crosby Garrett parade helmet discovered by a metal detectorist in Cumbria in 2010; the Staffordshire Moorlands pan discovered in 2003, with a polychrome enamel decoration and an inscription naming four of the forts along Hadrian’s Wall; and other objects including statuettes and enamelled brooches.  The evidence for non-ferrous (gold, silver, copper alloys, lead and tin/pewter) metalworking comes from the objects themselves, the presence of production debris, scientific analyses of material finds, and ancient and historic documents. Justine led us through someof the aspects of metalworking under the following headings: processes, workshops, and shaping and decorating techniques.

Processes are both chemical (smelting, refining, alloying) and physical (melting, shaping, annealing). Primary production involves mining, smelting and refining/alloying; secondary production is melting/casting, smithing, finishing and use. Evidence survives in the form of ingots (different shapes and sizes for different metals), crucibles, moulds, scrap metal and part-finished objects. Some small copper alloy ingots were shaped like chocolate bars and could be broken into pieces as required. Crucibles also came in different shapes and sizes with the smaller thumb-pots being used for precious metals. Some crucibles had an outer clay layer to prevent it falling apart if it cracked in use and sometimes this clay was extended up to form a lip for pouring the molten metal. Simple open moulds, investment or lost-wax casting moulds and, most commonly, piece moulds of two or more parts that fitted together were used. The Romans made moulds of different materials: clay, stone, metal, antler – even cuttlebone – and they could be used repeatedly for mass-production. Multi-moulds were piece moulds that were fitted together with a single entry hole for the molten metal: cone-shaped multi-moulds could produce 12-16 spoons at one casting. Piece moulds made of metal were held together with a wire loop and wooden peg; being more massive than the object cast, they did not melt in use and could be recycled to make new moulds as fashions changed. Two-piece stone moulds were used for casting pewter plates and bowls. Lost wax casting was only used to make fairly large, one-off fancy objects such as statuettes. Scrap metal included sprue and failed castings. Part-finished objects, particularly coin blanks and brooches, may be found and these can provide information on production methods.

By 1992 a total of 242 metal-processing workshops had been recognised in Britain: in forts, towns and rural settlements alike. They were not restricted to just a few large centres and it appears that metalworking was conducted everywhere. It is not known whether this was done by itinerant metalworkers or if it was a common skill. Workshops are always found indoors, since it is necessary to see the colour of the fire clearly in order to judge the stage of the process.

Shaping and decorating were divided into hot and cold working techniques. The former included casting and annealing (as metal is hammered it hardens and becomes brittle and must be constantly reheated to keep it malleable), and enamelling and fire-gilding. Cold working techniques included shaping, engraving, filing and polishing. Relief decoration was carried out using engraving, piercing, chasing, punching, repoussé and embossing techniques. Applied decoration included plating and tinning, inlay, overlay, filigree work with fine wires, niello (a black metal sulphide), enamel and glass/gemstones. Patination was used to change the colour of the metal, since colour and contrast were considered important and many techniques were used to produce a polychrome effect.

About one in six brooches were enamelled, with tinning the next most popular method of decoration; glass inlays, gilding and other techniques were not so commonly used. Brooches cast in brass (a copper and zinc alloy) account for around one-third of the total and these were the most highly decorated, probably because the metal shone like gold. Tinning parts of the decoration on a brass brooch created the appearance of gold and silver. Wires or studs of different metals were used to give a bichrome effect, such as brass (yellow) and copper (pink).

Gold leaf was sometimes applied as gilding, although iron pyrites (fool’s gold) may be naturally deposited on objects found under water-logged conditions to deceive the unwary. Fire-gilding is a technique whereby powdered gold and mercury were ground into an amalgam and applied to the object to be decorated which was then heated to vaporise the mercury. A small rounded depression in an amphora sherd found at Southampton in a 4th century context was found to contain a tiny flake of gold and more detailed analysis revealed the presence of mercury; the sherd had been used as a grinding slab to prepare an amalgam, and so far this is the only evidence for fire-gilding in western Europe.

The meeting ended with examples of the many different and exquisite enamelling techniques that were used by the Romans.