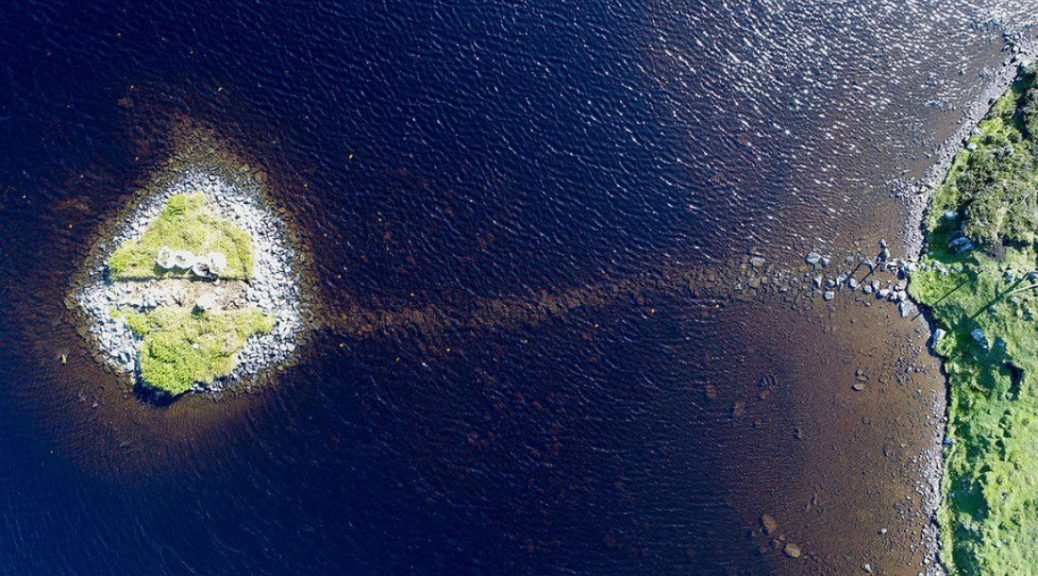 A talk by Professor Duncan Garrow, University of Reading, on Saturday 23 April 2022

Duncan Garrow began with an outline of the project which gives his talk its title. Very much a product of teamwork, it has many contributors, including his principal collaborators Dr Fraser Sturt and Stephanie Blanksheim of the University of Southampton, and Angela Gannon of Historic Environment Scotland.

A good definition of a ‘crannog’ can be found in Canmore (Historic Environment Scotland’s national record of the historic environment), as follows:

‘An island, partly or wholly artificial, often formed by dumping timber, earth and stones and revetted with timber piles or a palisade. Built in a loch, wetland or estuary and dating from prehistory to medieval.’

Crannogs have been known (and some excavated) since the mid nineteenth century, and date from various periods, with some having been in use over more than one period. Although over 500 have been recorded in Scotland, of which 150 are in the Outer Hebrides, they are still relatively under-studied. Neolithic crannogs were relatively unknown until the excavation in 1988 of the crannog at Eilean Dhomhnaill, North Uist. This had been supposed Iron Age but was found to be Neolithic, with a long and complex sequence of structures used, perhaps intermittently, for more than a thousand years.

The next significant study was in 2012-15 by Chris Murray and Mark Elliott, Chris being an ex-Royal Naval diver used to delicate work under water. These investigators searched for promising sites on Google Earth, and Chris dived for evidence, often finding pieces of pottery which Mark was able to identify as Neolithic.

This led to pilot work in the lochs of Lewis in 2016-17 after quite a number of crannogs had been found. The University of Reading assisted in dating some material, whereupon Duncan and Fraser became interested in studying crannogs, with the advantage that Fraser was a trained scuba diver. They identified two sites they wished to examine: in Lochs Bhorgastail and Langabhat. Remote sensing revealed that the crannogs were sited in the loch at the point where shallow water (3 – 4m deep) met deep water (up to 20m deep), and photogrammetry allowed visual representations of the structure of the islands.

Crannogs generally cluster around the date 3500 BC. They must have been constructed by communal effort; yet they seem not to have been part of everyday life, because pottery sherds are found in rich quantities on the surrounding loch bed (where they survive well in the silt), with few sherds on the islet itself. They were evidently used for some special purpose, perhaps for feasting. Visible remains often include a causeway connecting the crannog to land.

In preparation for the on-site work, Stephanie Blanksheim searched the available records, and her colleagues at Southampton used computer software to establish the precise position of the islets. The Uist Community Archaeology Group then visited sites identified by Stephanie as promising. Fieldwork could begin in 2020 on receipt of a large grant from the Arts & Humanities Research Council.

The archaeological work on the Bhorgastail crannog was hampered by a modern cairn (a fairly common feature) and a covering of woodrush vegetation which was difficult to remove. Under the vegetation was peat covered in stones. Two trenches were dug: one across the islet, and an off-islet underwater trench aligned with it. A sondage was also dug through the layers of the islet, which revealed, beneath the stones, thick layers of wood material about 50mm in diameter. Similar layers of timber were found in the underwater trench.

The wooden architecture extended far beyond the visible stone crannog, which was perhaps 20m across. Some burnt layers of timber were dated by radiocarbon techniques to the Bronze Age. It was clear that the wooden structure predated the stone one. Material culture was overwhelmingly associated with the wooden phase.

In associated work, the environmental consultancy QUEST made a number of bore-holes in the surrounding land, so that their cores can be analysed (for example, for pollen) in order to provide a landscape context. The cores should also reveal whether the crannogs were built in the loch, or whether at the time of their construction they were in shoreline marsh. Since the excavation, Angela Gannon and her staff from Historic Environment Scotland have been undertaking a contextual landscape survey, which will continue next summer when further sites will be excavated and dived.

A team from Bristol University will be looking at ancient DNA found in the loch bed, where it survives well in the sediment. One question to be answered is what animals lived in the area, since bones tend not to remain long in the acid soil. Also at Bristol, Dan Brown and Lucy Cramp will examine the materials absorbed by the pottery, in order to identify what foodstuffs were contained or cooked in the pots. Initial findings suggest that carcase-based and cereal-based foods were cooked separately.

In the summer of 2022 survey work will be undertaken of some 20 crannogs in North and South Uist, including dives to recover material culture around them. The summer of 2023 will see a return to Loch Bhorgastail in order to complete the excavation by providing an understanding of the timber phase.

The finds will probably go to the museum in Stornoway. Duncan’s team is also working with the Ordnance Survey to create an app which will provide a tour of the islands’ prehistory.

The excellent illustrations to this talk showed not only the lovely landscape but also the logistical challenges of working in such a remote and difficult environment. The nearest road was several hundred metres from the excavation, and the team’s four-wheel drive vehicle once had to be rescued from boggy ground by a neighbour’s tracked van. Diving equipment is heavy and bulky, and the 8 x 2m metal frame used to demarcate the underwater trench was especially awkward to manage. The most demanding task was the management of spoil in a constricted space. Almost 30 tons had to be put into bags and taken ashore by rowing them there in a rubber dinghy. Duncan confessed to being extremely tired by the end of the dig. But he still looked very fit!