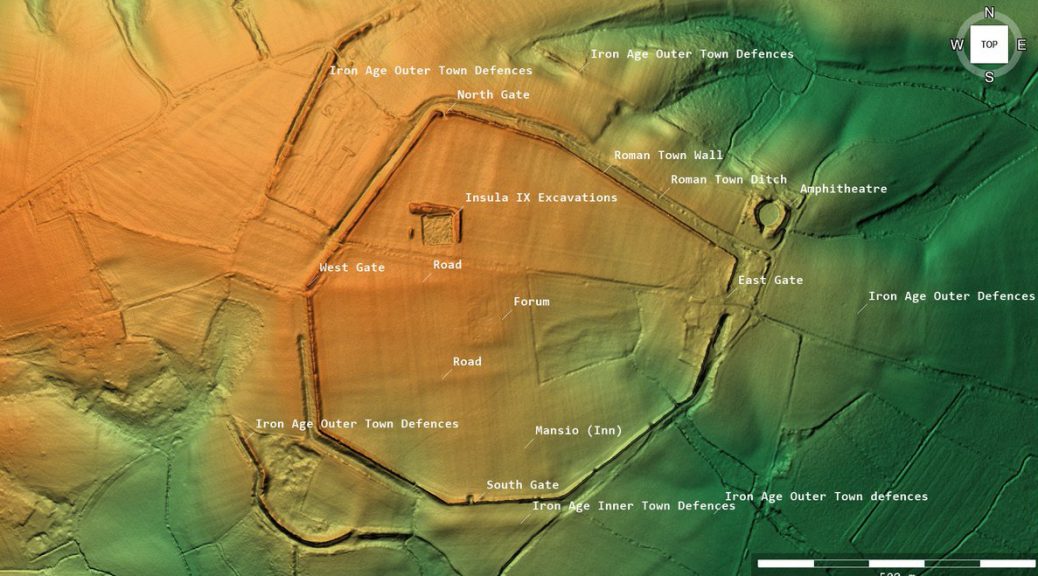 Dr Krysia Truscoe worked on the Silchester Environs Project, looking at the outlying linear dykes. Her PhD research developed from this, setting out to discover whether the Silchester area evidence is found at other sites. Using aerial photographs and Lidar she looked at Colchester, Silchester and Chichester. All three sites have extensive linear dykes, and her aim was to look at their landscape setting, to establish whether the dykes are associated with nucleated settlements and to ask whether they are indeed ‘territorial oppida’.

The oppidum at Colchester has had the most excavation in the past and the whole area is thick with linear dykes. There is coin evidence of the Trinovantes and Catuvellauni tribes and the main sites are at Sheepen and Gosbecks. Sheepen was excavated in the 1930s, 1970s and 1993-2003 revealing 289 coins, pottery, amphorae and industrial as well as domestic and settlement evidence. It’s a mixed, multifunctional site. Gosbecks, excavated around 1949, shows copious Iron Age features, with late Iron Age evidence hard to distinguish from Roman. There is a clear Roman temple and theatre amongst the abundance of crop marks. Nearby Stanway and Lexden are funerary sites, with a cemetery then a later burial enclosure at Stanway (50-10BC) and cemeteries placed outside earlier dykes at Lexden (AD40-60). It is possible such monuments were deliberately placed at entrances to important enclosures.

At Silchester, Krysia was looking at the outlying linear dykes in relation to the wider dykes to the north-west. Some dykes pre-date Roman Silchester (Calleva) and probably didn’t all have the same function, and territorial borders may have fluctuated.  Calleva expanded quickly and had strong European links. When Lidar was superimposed on previous maps, complex crop marks were revealed, some perhaps featuring Roman and medieval activity.

At Chichester there are plenty of linear dykes but there is no apparent central settlement as at Colchester and Silchester. Krysia looked at what survived on the coastal plain and on the Downs above Chichester, where dykes suggest a pre-Roman settlement. Both Fishbourne and Chichester lie to the south and the presence of an oppidum is suggested by pottery, amphorae, coins, and some evidence of coin production. Atrebatic gold coins were found on the Selsey peninsula. It is possible some dykes were older than others and they may not all have been in use at the same time. Krysia also did some on-ground survey, which made matters even more complicated! It seems quite likely there were two nucleated settlements in the Chichester area.

So, how do the settlement patterns differ at these three sites, Colchester, Silchester and Chichester?

Colchester shows intensive occupation and cultivation at small farmsteads, often beyond the dykes and spreading out into the wider landscape. The dykes may well have been for directing people rather than for defence. Silchester has lots of settlement evidence with enclosures to the north, possibly prehistoric. But the heavy clay soil is difficult to read and land use has obliterated much evidence. The town of Calleva itself has covered much Iron Age settlement evidence. At Chichester, where Krysia studied 6,000 photographs, there is a mass of Iron Age evidence, much of it undated. There is a suggestion that settlement moved from the South Downs to the coastal plain to the south, with many field systems and droveways evident.

There are similarities between the three sites: they are all relatively low-lying and the linear features are hard to date. Silchester stands out in many ways. Were people meeting at these sites as enclosure evidence suggests? Were areas occupied permanently or not? They were probably transit places, for meeting up during the year for trade and socialising.

Krysia’s research was set up to find out if the evidence in the Silchester area is happening at Colchester and Chichester. Her conclusion is that all three sets of linear earthworks are too massive an undertaking not to have had a purpose but were probably for directing people not dividing them. These sites do not seem to be the same but there are significant similarities. They appear to have been Iron Age social centres instead of territorial oppida.

Krysia’s talk was well-illustrated and crisply presented. She is to be congratulated on tackling such a large body of aerial photographs and Lidar results with such determination. Iron Age linear dykes are impressive on the ground but are often difficult to make overall sense of. Krysia’s patient research has squeezed answers out of existing records and made things much clearer.