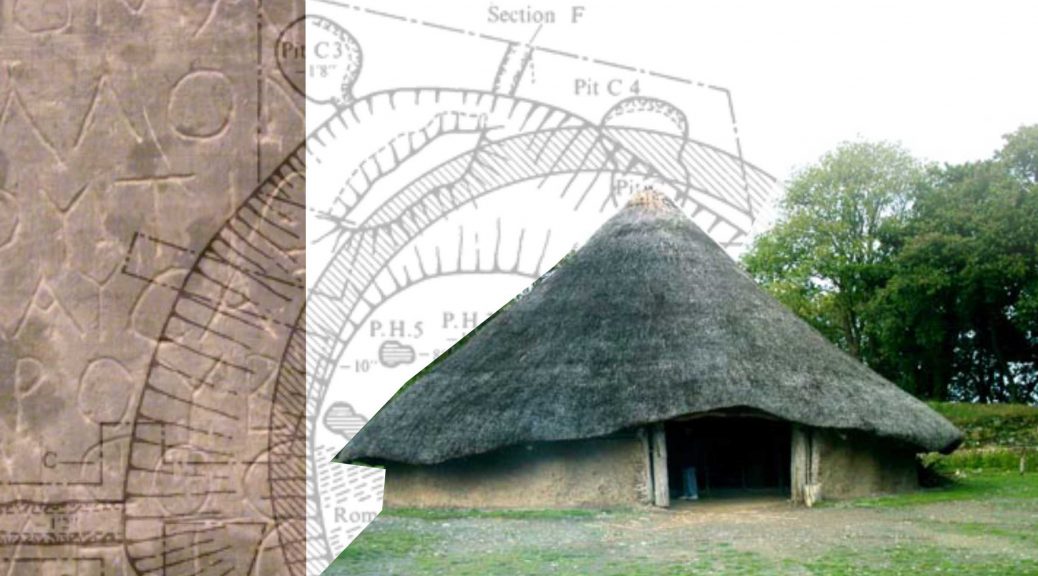 As one travels along the Oxford Road out of Reading one sees a distinctive red brick building on the left – a tower shrouded in scaffolding.  This is Brock Keep, a grade II historic building dating from 1877.  It was used as a military gatehouse and armoury from then to 1979, then as a shelter for homeless people and from 1980 it has contained artist’s studios and exhibition space managed by Open Hand Open Space.  OHOS now uses the former guard room and detention room as an exhibition space. OHOS is an Industrial and Provident Society committed to public education in the visual arts and to restoring and maintaining the Keep.  National Lottery funding has now been awarded for capital works to repair the roof and turrets and improve the ground floor access and facilities.

It was in this historic space that BAS put on a two week exhibition ‘Living in Iron Age Berkshire’ during the first two weeks of October.  Included were nine information panels on Iron Age life and a further set of panels on communities in Berkshire and its environs.  The posters were largely based on research which was carried out by BAS members and published in BAS Journal Vol 78.  Copies of this journal are still available at a cost of £15.

The Museum of Reading kindly loaned a box of handling artifacts for visitors to see up close, and a quern stone, loom weights and Iron Age pots from Blewburton Hill for a display case, which we supported with posters from the Blewburton Hill geophysics survey.  Artists from OHOS contributed contemporary artworks to show beside the Iron Age exhibits, both paintings and sculptures.

At a popular table in the exhibition children (and adults) were able to build their own round house from clay, sticks and paper.  Every completed house was photographed with its proud creator and the pictures displayed on the boards.  We had eleven masterpieces altogether.  In another area of the space there was a display of the history of the Keep and the plans for improvement.

A Press Release sent to local news outlets resulted in an early morning call from That’s Thames Valley TV, which is based in Reading, asking for an interview that lunchtime.  Fortunately Andrew Hutt and Jon Lockart from OHOS were available to talk about both the exhibition and the building, and a short item was broadcast that evening.

We had around 100 visitors over the exhibition period.  Many dropped in on seeing the A-frame outside, and some had become used to coming in whenever OHOS held an art exhibition there.  Many people took leaflets about BAS and our lectures, some bought copies of the journals we had on display, and we gained at least one new member.

There were two evening lectures given by Andrew to good audiences on ‘Berkshire’s Hillforts’ and ‘Power and ‘Politics in Iron Age Berkshire’.  We also invited guests from the Unitary Authorities, the town councils of Berkshire, and local history groups and societies to a reception on the middle Sunday.  With wine and nibbles the conversation flowed – and some guests even looked at the exhibits!  OHOS members kindly led tours of the rest of the building, not normally open to visitors, where we could see the artists’ workshops upstairs.

This exhibition would not have been possible without the initiative and planning of Andrew Hutt and John Chapman, and the support of many BAS members who helped to install and pack up the posters and provided stewards throughout the two weeks. Special thanks to Ann Griffin and Gail Eaton for bringing delicious canapes for the reception.  Lastly thanks to OHOS for allowing BAS to use their space and for the interest they showed in what we were doing.