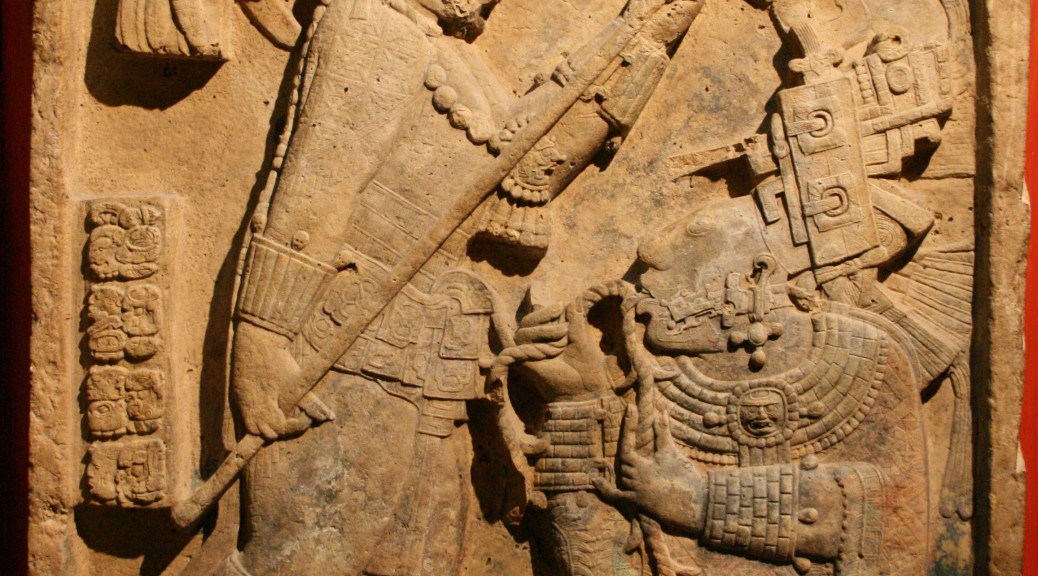 A lecture given to BAS on Saturday 15th October 2016 by Dr. Diane Davies

Having developed an interest in the Maya by excavating sites in the rainforest of Mesoamerica, Diane Davies is promoting awareness of their remarkable civilisation, which remains relatively little-known in this country, through education, lectures and guided tours. The Maya lived, and still live, in eastern Mexico, Guatemala, Belize and parts of Honduras and El Salvador. The first agricultural villages date back to c.2000 BC but the full flowering of Maya culture, the so-called Classic period, took place between c. AD 300-900, contemporary with the late Roman and Anglo-Saxon periods here. Their subsequent decline remains the subject of heated debate: overpopulation, environmental degradation and civil war probably all played a part.

Mayan cities are dotted throughout the rainforest and many probably remain to be discovered. They are characterised by massive pyramids, elaborate ceremonial centres and palaces, ball courts and roads, and intricately carved monuments. Successive pyramids were built over and on top of each other (like Russian dolls) and usually had a temple on the summit, often with an elaborately carved roof comb and reached by a long flight of very steep steps. The tallest, at a site called El Mirador, is over 70m high. The Maya built in limestone and used the corbelled arch to span necessarily narrow chambers and vaults. Remarkably, they were a stone age culture and created their cities without the help of metal, pack animals or the wheel.

The Maya devised a complex calendrical system and the only true script in the New World. The calendar consisted of the haab or 365-day solar calendar with 18 months of 20 days each and five ‘dread’ days at the end of the year, and the tzolkin or 260-day sacred calendar which was a repeating cycle of 20 day names and 13 numbers. These two calendars combined to form a Calendar Round of 52 years: imagine two giant cogwheels with 365 and 260 teeth respectively; it will take 52 years before the starting combination of dates is reached again. In addition to this, the Long Count calendar was used to date events by simply counting the number of days that had elapsed since a hypothetical start date corresponding to 2 August 3114 BC. For convenience, this enormous count of days was divided into five units ranging from a single day (kin) to 144,000 days (baktun). The Maya used bars (= five) and dots (= one) to record numbers, used base 20 and were one of possibly only two world cultures to develop the concept of zero (represented as a stylised shell).

Mayan hieroglyphs form a syllabic script (rather like Japanese) of about 800 signs with some logograms (signs representing a whole word) added for good measure. Each glyph consists of a central element to which other elements can be added to modify it grammatically: the same concept can be recorded in different ways according to the whim of the scribe or stone mason, adding greatly to the complexity of the system. Most stone monuments record key events in the lives of the rulers of each city state, whereas folded books or codices of deer skin or bark paper recorded astronomical and other information: unfortunately nearly all of these were destroyed as idolatrous by the Spanish conquerors.

All art, whether carved in stone or painted in books or on murals, was commissioned by the king (rarely but sometimes the queen) to demonstrate his/her power and achievements. The king is often shown seated on a jaguar pelt and being offered the crown, usually by his mother. The bloodline was very important: an altar at Copán in Honduras is carved with all 12 rulers of the dynasty in sequence forming a circle, with the first king giving the symbols of kingship to the last. On his accession the king adopted a new name which often included the name of a god, and was privileged to wear heavy jade ornaments to symbolise his invincibility. He legitimised his kingship in a public display of blood-letting by piercing his own penis, offering his blood as a sacrifice to the gods. When the king died he became a god. The carving on a stone sarcophagus lid from Palenque, famously interpreted by Erich von Daniken as an alien at the controls of a space ship, shows king Pacal falling into the underworld represented by the mouth of a serpent and at the same time being reborn as a god with the tree of life growing out of his body.

Mayan city states were constantly at war with one another, the objective often being to capture high-ranking prisoners for sacrifice. The Mayan ball game, the earliest team sport in the world, was sometimes used as a substitute for warfare. Played in a special court, the players had to propel a hard rubber ball through a stone ring placed high on the side wall using only their elbows, knees and hips. Woe betide the losing team!

Diane Davies herself has played a part in uncovering exceptionally well-preserved Mayan murals at a site called San Bartolo, dating back to 100 BC and showing complex creation scenes and the accession of kings. She showed us a replica of a ceramic cup, the king’s own cocoa mug, demonstrating that in addition to art, writing and architecture, the Maya also gave the world chocolate.