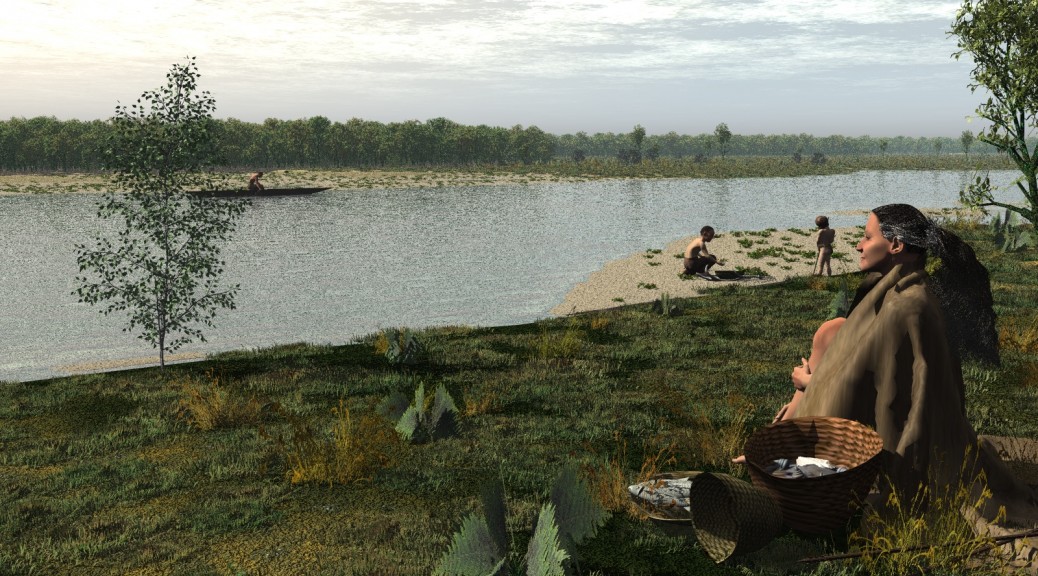 Mesolithic and Palaeolithic Archaeology in the Kennet Valley

A lecture given to Berkshire Archaeological Society on Saturday 12th December 2015  by Dr. Cathie Barnett

Dr Catherine Barnett described the work of the Kennet Valley Mapping Project, a joint initiative between the University of Reading, Wessex Archaeology, and West Berkshire Council to investigate Upper Palaeolithic and Mesolithic archaeology along a 20 km stretch of the Kennet between Kintbury and Aldermaston. This area is already well-known for early prehistoric hunter-gatherer sites dating from around 14,000 to 5500 years ago, a period of time that encompassed massive climate change from fully arctic to warm conditions in less than ten years.

Sedimentary analysis based on core samples showed that 11,500 years ago the area that is now the Kennet valley was still a barren landscape with an average annual temperature of 25 degrees centigrade. The dominant vegetation was juniper and birch with a few pine trees, and the large animals on which the Upper Palaeolithic hunters depended were reindeer, bison, and horse. Typical artefacts were long flint blades, but as the climate warmed the tools became smaller with the appearance of Mesolithic microliths. The reason for this change was climatic: as the open landscape changed to dense woodland, a new toolkit was required to clear vegetation and hunt smaller animals such as deer, fish, and birds. With this change in economy came the first evidence for human landscape management, with episodic burning to clear the reed beds and open glades in woodland, to encourage new plant growth to attract the animals on which people depended. The survey showed that Mesolithic camp sites, evidenced by the presence of flints and butchered animal bone, were present all along the river floodplain, where not only water birds and fish were available but movement along the valley bottom was easier than on the wooded slopes.

An extensive programme of core sampling showed that evidence for the early Mesolithic was contained within a layer of peat or black clay immediately above the natural gravel. These sites are now deeply buried and easily overlooked, and one of the aims of the project was to determine the extent of the early peat deposits. This was achieved by combining two geophysical techniques (electrical resistivity tomography and ground penetrating radar) to locate the characteristic sediment layers and then to core selected areas. This methodology was successfully used in Victoria Park, Newbury, which was formerly marshland. A possible site was detected near the present boating lake and a 2 x 2 m trench was opened immediately over a Mesolithic site, showing that the methodology worked. This small trench yielded 379 microliths including 21 pristine finished tools, three cores, butchered bones including those of red deer and beaver, hazelnuts, birch and hawthorn charcoal, and a hearth. Samples were taken for dating, particle size analysis, and environmental evidence in the form of micro- and macrofossils, including snails. Post-excavation work has provided two dates for this site, 8430–8240 and 7615–7545 years ago, showing that at least two visits had been made to this spot. The project has increased public awareness of this early period, and has also published guidelines for developers working in the Kennet valley.