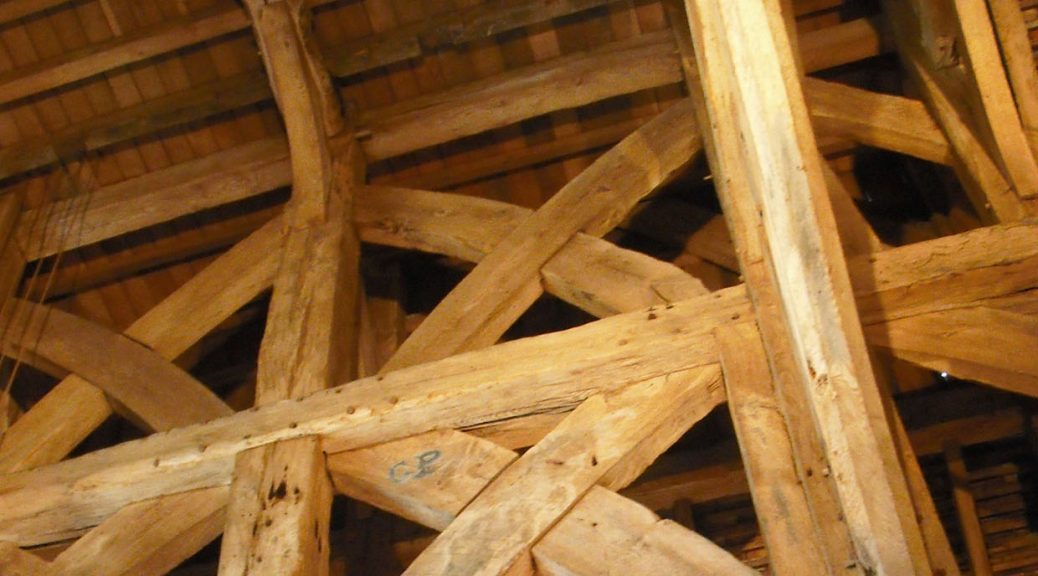 Martin began his talk by shattering our illusion that all trees lay down one neat and countable growth ring each year: this is dependent on climatic conditions, physical damage to the tree, exposure to forest fires, the presence of insect pests and diseases, and even the species of tree. Rings may run together in some places and not in others, so two samples taken from the same tree could give different results. In other words dendrochronology, the art of dating a piece of timber by counting its growth rings, is not straightforward.

In order to iron out some of this variation, the ‘common growth’ of trees over a fairly wide area is determined by comparing their ring patterns. Whereas growth is affected by local conditions, major climatic events such as the drought of 1976 will affect all trees in the area and produce a recognisable blip in the ring pattern. A timber sample that represents a fairly long period of growth, say 80 years, will probably show several blips in the ring pattern that can be matched with similar blips at the same intervals in other samples. In this way samples can be overlapped by matching the blips to extend back in time, starting from a sample with a known recent felling date. In Germany the tree ring pattern has now been extended back 10,000 years; in the UK it currently goes back 8,500 years. Oak gives the best results but chronologies are being established for other species such as elm. Quick-growing trees that are used in construction when only 30‒40 years old will not present a long enough series of blips to be fitted into the sequence with confidence and therefore are difficult to date. The 8,500-year chronology that has been established for the Californian bristle-cone pine, the world’s longest living tree, is so precise that it is used to calibrate radiocarbon dates. Dendrochronology is now such an exact science that it can date the felling of the Neolithic timbers in a Somerset Levels trackway to the winter of 3,807‒3,806 BC!

However, the chances of a single sample of timber providing an accurate date are remote. The dates, of course, refer to the timbers and not necessarily the buildings in which they are found: timbers could have been stock-piled, reused, or added in more recent repairs. Wood distorts as it dries out and it is possible to tell if timbers were used ‘green’, in which case the felling and construction dates will coincide. Lots of samples are required in order to determine the felling date as the outer pale sapwood must be present: the outermost ring represents the season when the tree was felled. If only dark heartwood is present, it could represent a period some 200 years before the actual felling date. Fortunately, statistical methods can be used to estimate the date of felling if only a small remnant of sapwood remains.

Martin gave us examples of some of the buildings he had worked on, showing how dendrochronology can provide insights into the construction process: dating additions and renovations, and providing exact dates for historic architectural styles and innovations. These buildings included the Pitstone windmill, Greys Court, the Blackmore timber church tower, cruck cottages in the Midlands, vernacular buildings in Snowdonia – and the Mary Rose. By comparing the ring pattern of samples with those from elsewhere in the country and further afield, it is possible to recognise non-local sources for some timbers: most of the Mary Rose timbers were sourced from Hampshire but a later refit at Chatham is reflected by wood cut in Suffolk or Essex. The ability to source timber can lead to some unexpected results: a late 14th century church chest in Suffolk, although carved locally, was made from boards imported from Poland. Dendrochronology has a great deal still to teach us.