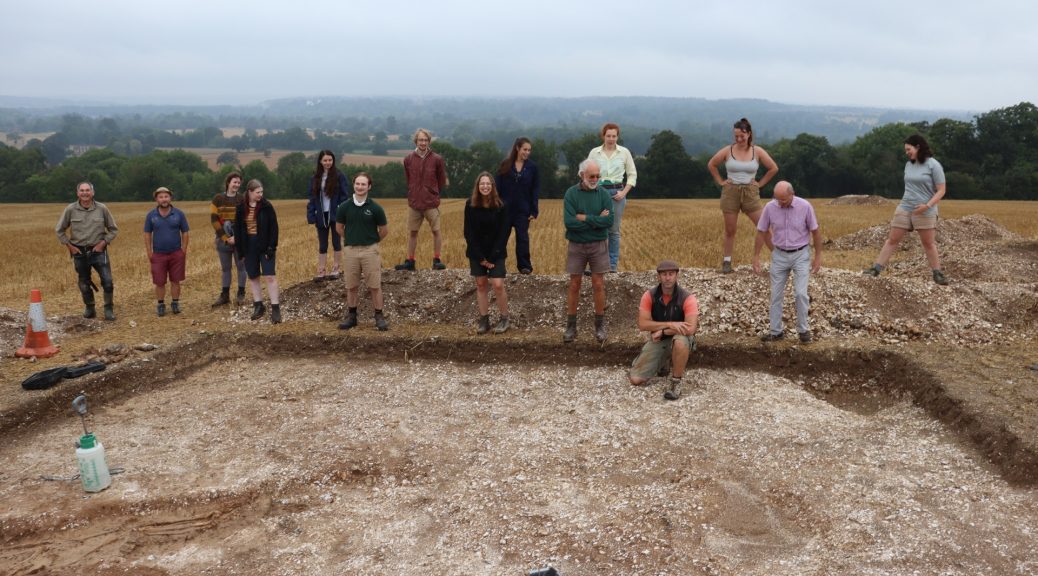 In speaking of this recently discovered burial, Gabor Thomas began with two provisos. First, the ‘provisional’ in the title of his lecture indicated that more work remained to be done: for example the grave goods had only just emerged from scientific conservation, more analysis was required on organic material, and work was needed on the typology of the grave goods and on contextualisation. Second, he would deliberately be imprecise about the location of the finds, by agreement with the landowner.

He would cover three aspects, starting with the discovery leading to the investigation, followed by a description of the contents of the grave, and ending with a discussion of its significance in relation to this particular section of the Middle Thames Valley. He emphasised that the success of the investigation, whose fieldwork began in early August 2019 and continued in 2020, showed clearly what can be gained from collaboration between detectorists and archaeologists.

The first signal leading to the discovery of the grave was picked up in 2018 by Sue and Mick Washington, members of the Maidenhead Search Society (MSS) on their first visit to the field, which had previously been the object of searches by other detectorists. The source of the signal proved to be the upper rim of a bronze vessel, and the rim of a second vessel was exposed beside it. Since this was clearly not a modern deposit MSS made contact with the Portable Antiquities Scheme, after which the Buckinghamshire Finds Liaison Officer arranged for a small test pit to be dug. Because the vessels were fragmented and fragile, they were removed from the ground en bloc in their surrounding soil. The lifting process also exposed a pair of spearheads and a piece of toe bone, and the ensemble indicated an Anglo-Saxon burial. The finds were in good condition considering how near they lay to the surface. Funding was raised for professional conservation of the vessels and spearheads, which were recently bought by Buckinghamshire Museum.

Things might have ended there but for the persistence of another member of MSS, James Mather, who was concerned about the insecure position of the relatively shallow burial on worked agricultural land. He made contact with Gabor Thomas. Following permission from the landowner, Gabor undertook a geophysical survey, which showed the immediate area to be scattered with anomalies possibly indicative of buildings. Early in 2020 trenches were opened to investigate these anomalies (work carried out by students and staff of the University of Reading, with volunteers from local societies including MSS). Most anomalies were found to be natural pockets of clay and flint in the underlying chalk, and by the mid-point of the investigation it was clear that no large cemetery nor contemporary settlement lay in the immediate vicinity.

With much organisation already in place it then made sense to examine the burial itself. A trench 5 x 5 m was hand dug across it, extending down to the chalk subsoil. No evidence was found of a barrow ditch around the grave, but its upper layer had a capping of flints which might once have extended upwards in a cairn. A well-preserved skeleton was found, crushed by the layer of flints, in a canoe-shaped grave-cut, together with clusters of goods, including a magnificent sword with scabbard and scabbard fittings. The stony soil around the sword assemblage prevented en bloc lifting, but with patience it was brought out whole.

Contents of the grave

The contents of the grave consisted of the skeleton and 24 discrete objects. Initial analysis of the skeleton by Professor Mary Lewis of the University of Reading showed that it belonged to a male, about 40 to 50 years old, unusually tall (1.8 m) for the period, and of imposing physique.

Three weapons were buried, namely two spears, both of known Anglo-Saxon types from the mid-sixth century (the heads of both, and the ferrule of one, surviving); and a sword with a double-edged blade 98cm long and an H-shaped hilt. The grip of the hilt (of organic material faced with copper alloy) had a lower and an upper guard topped with a pommel. The scabbard had a copper alloy mouthband and chape, and studs survived from its suspension system. High status can be inferred from all the features of sword and scabbard, and all indicate manufacture in the first half of the sixth century.

The vessels included a flanged circular bowl decorated with repoussé around the flange, and an undecorated bucket of Gotlankessel type with a curved iron handle attached to the rim by two triangular lugs. Both were manufactured in the Frankish part of continental Europe in the first half of the sixth century. Another vessel was a late fifth- or early sixth-century delicate, tapering ‘Kempston’ beaker, probably of Kentish origin. All the vessels had Kentish associations either by manufacture or probable importation.

Amongst the tools and personal accoutrements found were a pair of shears, a buckle, a strike-a-light, a knife, some copper alloy tweezers, and a pair of iron rings about 8 cm in diameter of fairly flat profile (possibly the binding hoops of a drinking cup). Some fragments of glass and amber were also found, but in the grave-fill only. A notable missing element was any surviving part of a shield.

In summary this was a richly-furnished grave of a tall and physically imposing male dating to the early 6th century AD, seemingly buried in isolation on a commanding site offering extensive views over the Thames valley.

The context is somewhat perplexing. Most commentators believe this area of the Thames was peripheral borderland annexed successively by rival powers. A British community probably existed on the far side of the river. Not much material of this date has been found along this section of the Thames: the valley bottom settlements found by commercial archaeology are sporadic.

Local parallels are unconvincing. Downstream the Taplow princely burial too has a sentinel position but is of seventh-century date and belongs to a different cultural world in which established dynasties ruled wide areas. Upstream several large Anglo-Saxon cemeteries exist, including within them clusters of élite people, buried likewise with luxury objects of Kentish origin: but such cemeteries are low-lying, in areas rich in evidence of settlement, with no known outlying sentinel graves. Other sentinel graves (e.g. Lowbury Hill) are substantially later, from the seventh century. They often lie under a barrow and are typically on the skyline as if proclaiming ownership of the land within view.

The recently discovered grave sits uneasily with a ‘disputed borderland’ description of the immediate area. The individual was buried roughly north-south with his right hand over his body as if clutching his sword. The site of the grave with its extensive views suggests the leader of a community which occupied the land around the hillside. It seems to indicate a self-confident group of people, which was perhaps eclipsed over the seventh century but was holding its own a hundred years earlier.