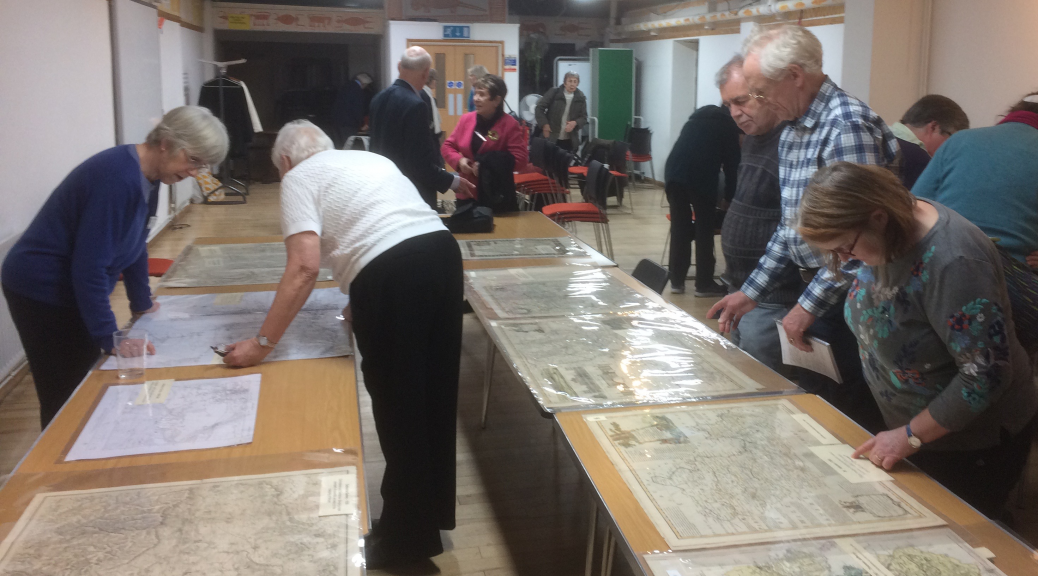 Putting Berkshire on the map: from Gough to Google

About 40 members and friends were present to hear a talk on the history of mapping from earliest times to the present, with particular emphasis on Berkshire. The first map of Britain was drawn by Matthew Paris c.1250 and was essentially an itinerary for pilgrims going to Canterbury and on to the Crusades. Despite its distorted shape, some details are clearly shown, including Hadrian’s Wall. A much more accurate map was part of the collection of Richard Gough, a late 18th century historian and collector of maps, who reportedly bought it for half-a-crown: the Gough Map has been dated to c.1360. Gough’s collection was bequeathed to the Bodleian Library and his eponymous map, drawn on two pieces of sheepskin sewn together, has been carefully conserved for display. It has a recognisable outline of Britain with towns and rivers and shows east at the top. It is incredibly accurate. Narrow red lines drawn between towns are mostly marked with distances in Roman numerals in unknown units. Gough thought these were roads but they may have been representations of distance rather than actual roads and are possibly a later addition. 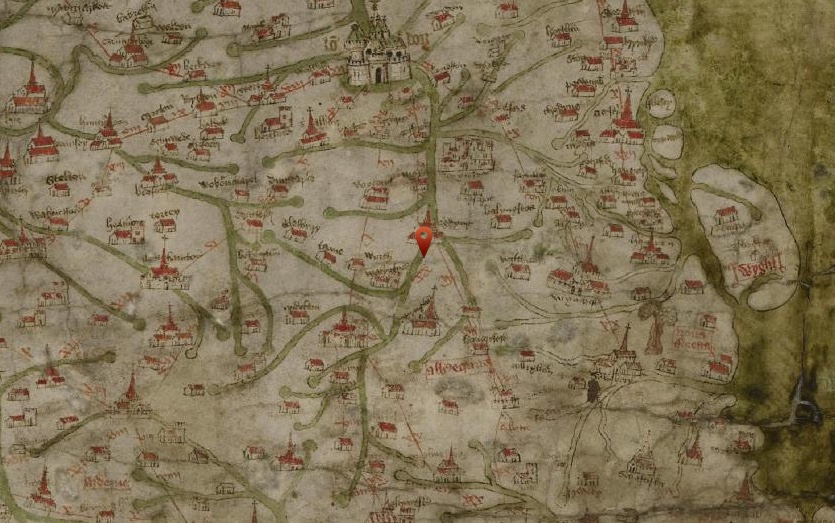 There was a hiatus in map production until the 16th century by which time the printing trade had developed sufficiently to mass-produce maps. The great spur to map production at that time was the military threat (which has continued to produce innovations in mapping ever since, such as the development of Ordnance Survey mapping under the threat of Napoleon and GPS and SatNav during the Cold War). A new development at this time was the art of surveying by triangulation, using a chain of 22 yards and a wheel for measuring distances. One of its earliest applications was the mapping of country estates for rich landowners.

Christopher Saxton was one such estate surveyor who in 1570 was commissioned by Thomas Seckford to survey all the counties of England and Wales because the roads were bad and there were no maps. Saxton produced his map of Berkshire in 1574. This showed the rivers and towns, hills and fenced parks – but no roads. In 1579 Saxton published his atlas of all the counties of England and Wales: Queen Elizabeth’s portrait graces the front of this atlas.

In 1590 Ralph Sheldon built a country house near Long Compton and commissioned tapestry reproductions of four of Saxton’s maps to grace its walls. These tapestries measured 20 by 16 feet high. That showing Worcestershire is on display in the Weston (Bodleian) Library; that of Oxfordshire is currently being restored by the National Trust. Mistakes on the original maps were reproduced in the tapestries. Saxton’s maps were engraved on copper plates which continued to be used for some 200 years and were modified over time. Roads were added for the first time in 1693. The maps were printed in black ink and coloured by hand.

The 1607 edition of William Camden’s Britannia included a full set of English county maps based on Saxton’s and re-engraved by William Hole with some errors introduced. John Speed was another historian who in 1611 decided to add maps to his History of Great Britaine and actually admitted plagiarism: ‘I put my sickle in other men’s corn’. He surveyed towns himself and added these to county maps copied from elsewhere, including Saxton’s maps which were re-engraved without the roads. During all this recopying of Saxton’s maps, someone added the word ‘quaere’ (‘ask’) to an unnamed settlement in Wiltshire and this became incorporated as a place name in the new engraving. 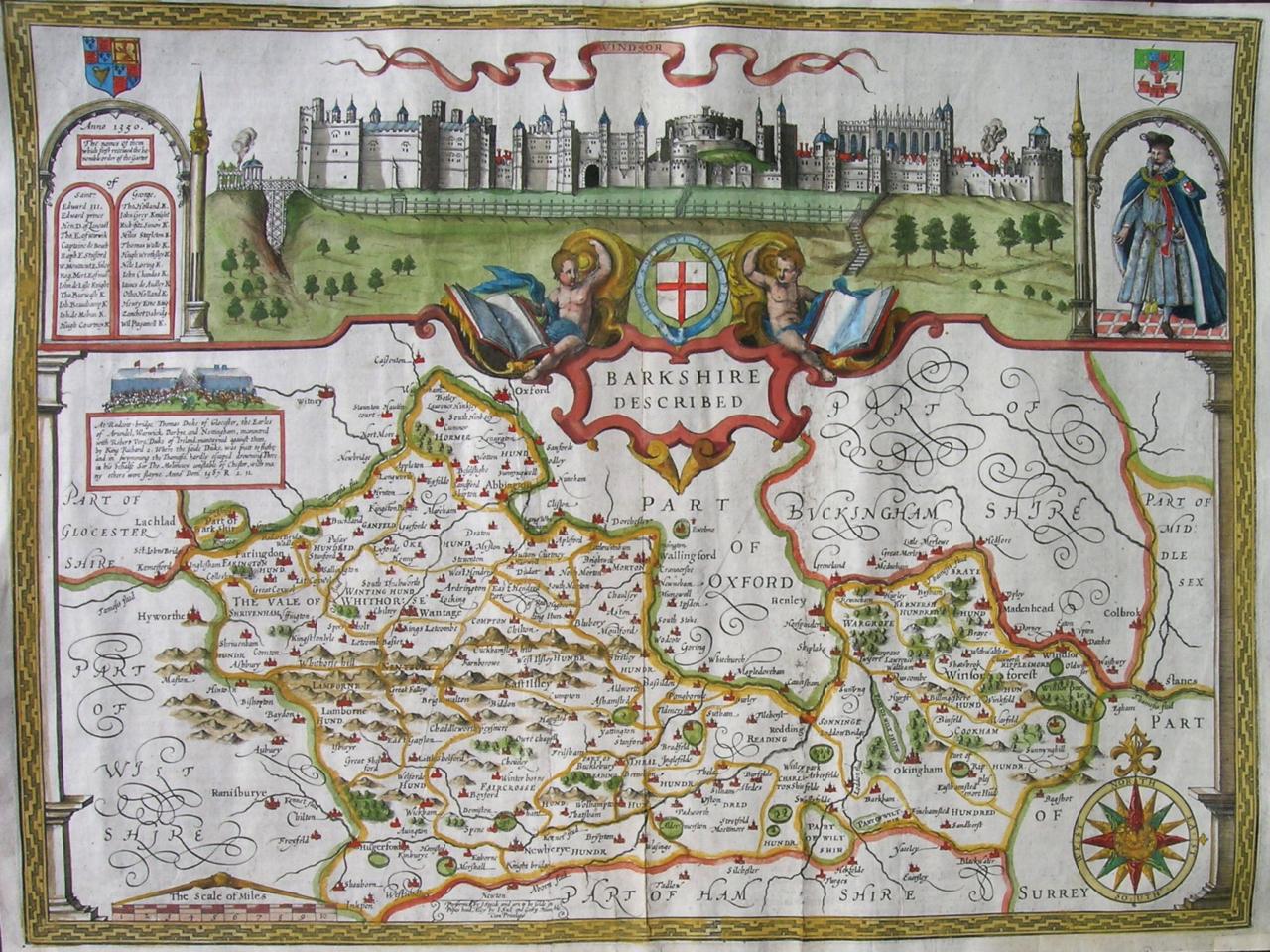 John Brill was the first to add latitude and longitude to maps in 1626, using a meridian based in the Azores. The first pocket-sizedatlas was published by Thomas Jenner in 1664. John Ogilby developed the use of strip maps and he surveyed all the major roads leaving London at a scale of one inch to the mile, showing the stumps of branches leading off them and a great amount of detail. His atlas was published in 1675 and was extensively plagiarised to produce smaller versions. A trend towards small maps included a set of playing cards produced by Robert Morden in 1676 with the 52 county maps on the card backs. Robert Plot used a map of Oxfordshire as the frontispiece to his book in 1676 which was surrounded by the coats of arms of his subscribers. Large maps have a poor survival rate and were not produced until quite late, including Thomas Kitchen’s atlas of 1760 which was the first that did not depend on Saxton’s maps – and Quaere disappeared at last!

Although many maps were produced during the 18th century, they showed little further innovation until the Royal Society of Arts offered prizes for improved county maps. Among those submitted were John Rocque’s 1761 map of Berkshire and Thomas Jefferys’ 1767 map of Oxfordshire. In 1797 Richard Davies produced a map of Oxfordshire which was the first to be produced at the larger scale of 2 inches to the mile: for this work he earned a premium of 50 guineas from the Royal Society of Arts.

Among the last map engravers were John Carey, whose New English Atlas was published in 1810, and Thomas Moule, who published his atlas in parts between 1830 and 1837.Towards the end of the 18th century the state-owned Ordnance Surveyhad begun to push private enterprise out. Once again it was the military threat that spurred map production and the OS began to use more advanced survey techniques based on triangulation that had been used by the French 50 years previously. A baseline was established on Hounslow Heath in 1791 andthis was used for all OS maps until the end of the 20th century. The first edition of the 1 inch per mile OS map was published in 1801, with shading used to show topography rather than contour lines.

Eventually 1, 6 and 25 inch and 10 feet per mile maps were produced and these included far more detail than modern OS maps. Today the OS holds a digitised master map of the whole country. Its digital Street View map was made publically available in 2014. The Get Mapping programme pioneered the use of satellite photographs to produce maps and Google maps now show all levels of detail world-wide. One might ask whether the paper map is doomed? These now comprise only 5% of OS output – so the answer is probably yes.

Following a short coffee break, members were invited to inspect a variety of maps that John and his wife had laid out on tables – including a detailed Russian map of Oxford created during the Cold War.