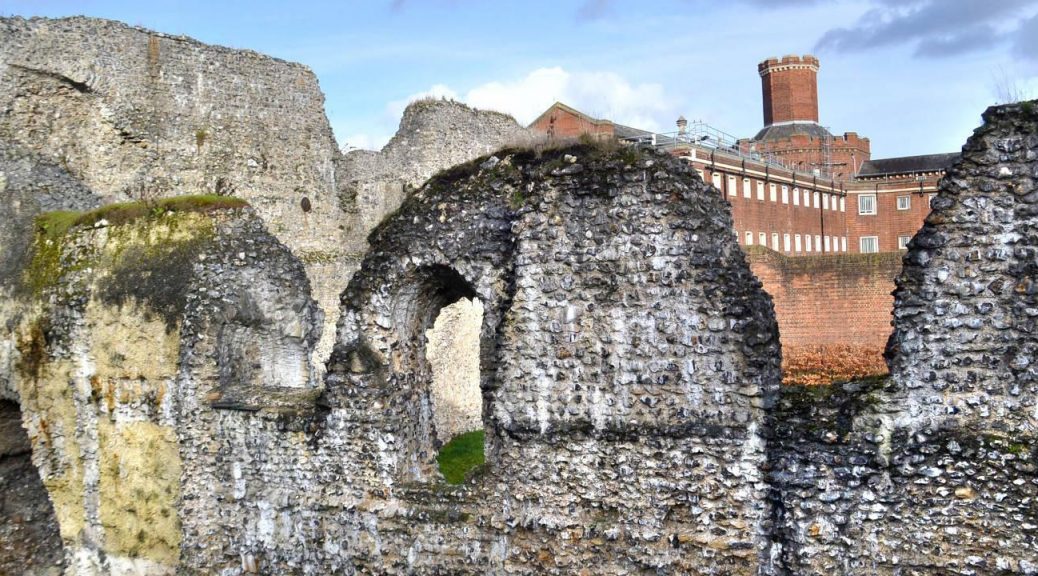 John Painter gave us a most enthusiastic presentation in this 900th anniversary year of the founding of Reading Abbey. It was well-illustrated with historic paintings and maps, site plans and photographs.

The Abbey was founded in 1121 by King Henry I for monks to pray for his soul. William of Malmesbury observed that it was a good place to travel from, which remains true of Reading today.  It was a lavish Benedictine foundation (perhaps many sins to expiate?) and built to a standard design, with a church with a tower and maybe a spire. Much has vanished though capitals from the cloisters have been found in local gardens. Ruins still standing include the Abbey church’s south transept, the chapter house, the dormitory, and the inner gateway. St Laurence’s Church was built as a chapel of rest for travellers with the hospitium nearby, both buildings still in use today.

Henry gave the Abbey over 200 relics, including the hand of St James the Great of Compostella brought from Germany by Henry’s daughter Matilda, without permission. Found when the prison was built, it now rests in St Peter’s RC church in Marlow. The St James link is kept in the three scallop shells of the Reading Borough coat of arms. The Abbey was always royal and used by kings travelling with their court, up to Henry VIII. Paintings in the Museum of Reading depict scenes from its history, including the 1453 Parliament held there. There were frequent rows between the Abbot and the town Council and when Abbot Hugh Faringdon refused to submit the Abbey to the King at the Dissolution in 1539, he was horribly executed.

After the Dissolution, kings continued using the Abbey complex as a royal site, but the Abbey church was locked up. Some materials, such as linenfold panelling were sold off early and one asset-stripper was executed for felony.  The Reading Minster Church of St Mary the Virgin bought stone for rebuilding their tower and Mary Tudor took stone from the Lady Chapel to build a residence at St George’s Chapel, Windsor. In 1558 Queen Elizabeth I still owned the site, staying in the Abbot’s lodgings and using the refectory and dormitory, but no maintenance was carried out. Eventually she gave a Charter transferring the property, including the grammar school and hospitium, to the Corporation of Reading. In 1625 Charles I visited the site.

The Civil war ‘did’ for Reading Abbey, leaving the ruins we now see. Defences were built, the north transept was blown up and a ditch and rampart dug through the church area. Afterwards the site reverted to the Council and some action was taken to sort it out. The hospitium was shared by the council (upstairs) and the grammar school (downstairs) but new municipal buildings were eventually built next door, which is why the Town Hall and Council buildings are where they are, on the old Abbey land. In Victorian times, Waterhouse designed the Town Hall complex and the new grammar school, Reading School.

St Lawrence’s became a parish church and the Corporation church, and St James’ RC church was built in 1837-40, designed by Pugin in Romanesque style to suit the Abbey. The Abbey gateway fell down and was rebuilt by George Gilbert Scott in Victorian ‘Medieval’ style and various monuments and memorials were erected in the Market Place and Forbury gardens, including the Maiwand lion. A plaque in the chapter house commemorates the writing down of the round ‘Sumer is icumen in’ by an Abbey monk.

In 2009 the Abbey ruins were closed for safety reasons as water had leaked into the walls. Heritage Lottery Funding meant the site was properly conserved and it reopened in 2018.  In 2016 the Hidden Abbey project used ground-penetrating radar in the prison car park, close to where Henry I was buried in front of the high altar. Alas there was no second king in a car park and the project found no more than did Cecil Slade’s earlier excavations.

A new gaol for Reading and Berkshire was built in 1842-44 on part of the Abbey Church site, designed by Gilbert Scott to look like Reading Castle. It closed in 1939, was briefly used by the Air Force, then linked to offences at Heathrow airport and until 2013 served as a young offenders’ institution. In 2013 MOLA dug 14 trenches but curiously stopped when they found something – there was no further investigation – but they found Medieval evidence. It is curious that nothing has been published about these excavations. In 2016 Artangel arranged an exhibition, tours and talks on the prison. In 2019 there was a ‘Gaol hug’ by the campaign to save the gaol, which is currently on the market for £2.5 million, and there is support for it to become a cultural centre. The artist Banksy added an original painting of an escaping convict to the outer wall on the prison, on Forbury Road.

John’s talk was lively, full of fascinating detail and it really brought to life a site that many of us take for granted. There is so much more to be discovered here.

PS This year is the 100th Anniversary of the Berkshire Organists’ Association (BOA). The Town Hall contains the famous ‘Father’ Willis organ so in celebration the BOA commissioned a new piece of organ music, based on the round ‘Sumer is icumen in’, first written down somewhere in the immediate vicinity.  Ghislaine Reece-Trapp’s ‘Fantasia on Sumer is icumen in’ was performed in a Town Hall recital on Heritage Day in September, to great acclaim.