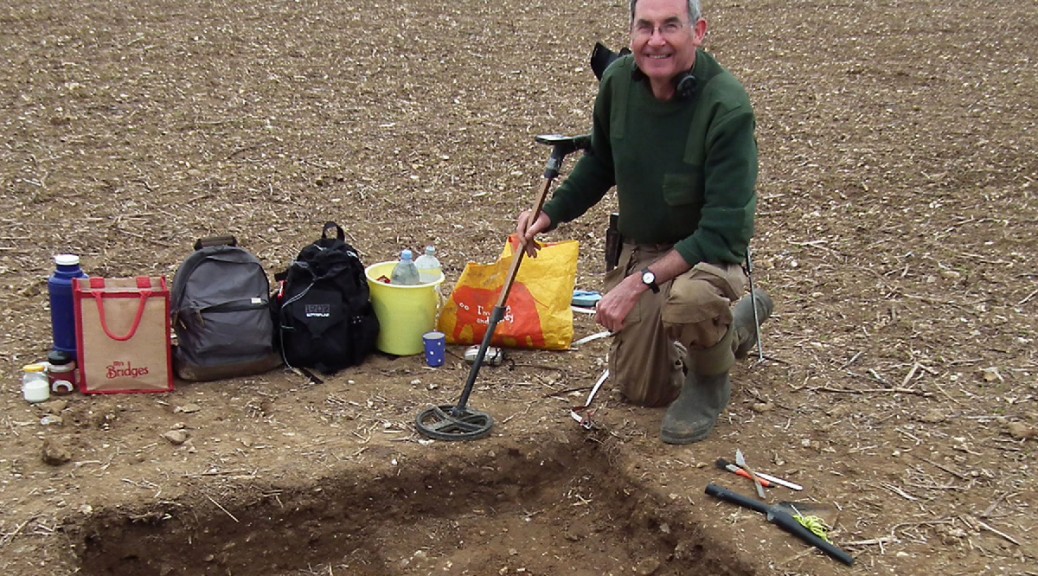 James started his talk by describing his background, how he had been metal detecting for 25 years, over 150 farms. He is a member of both metal detecting and archaeological organisations and continues to study archaeology with Oxford University Continuing Education courses. As a responsible metal detector, his finds have been reported to the Portable Antiquities Scheme (PAS), the Celtic Coin Index, and the British Numismatic Society.

Metal detecting in the UK involves about 30,000 detectorists, with 201 metal detecting clubs in England and Wales, and 40 Finds Liaison Officers (FLOs), to record reported finds, with the PAS database including over 1.5 million records. The legal side of metal detecting was described; the Code of Conduct 2017, and the Treasure Act 1996, both of which James appeared to think were fair and reasonable. James mentioned magazines; The Searcher and Treasure Hunting, for people interested in metal detecting, which he described as a ‘Wonderful Hobby’, but not a way to earn a living, so don’t give up the day job!

James described where in the UK, with the permission of landowners or councils, metal detecting is allowed. This includes areas such as ploughed land, pasture, forests, building sites, beaches, archaeological spoil heaps, and, interestingly, parks in Reading. Essential equipment includes a hand-held metal detector and a foot-assisted trowel. A probe, or mini metal detector, was described as useful to archaeologists in trenches, as it is a quick way of finding out if there is metal below where a person is digging, allowing it to be carefully exposed, without damage.

James talked about the benefits of metal detecting during archaeological excavations, such as scanning the topsoil before excavating, scanning the surrounding wider area, and continuing to scan as the trench grows deeper, to spot artefacts before the digger’s trowel does. Ongoing scans of the spoil heap will show the context of any find, and a final scan of the spoil before reinstatement will reveal any metal not detected earlier.

James showed us some of the many artefacts he had found over the years, including non-metallic items, such as a Neanderthal hand axe. He showed a selection of rubbish, some toxic to the environment, that he had found and removed. We also saw jewellery and coins, including silver pennies, cut to produce halfpennies and farthings (fourthlings), and a gold coin of Roman emperor Theodosius, with a ‘Two Emperors’ design on the reverse. An 1850s livery button bore a Latin inscription which translated to ‘I live in Hope’, which James said could be the motto of metal detectorists!

The discovery of the Watlington Hoard in 2015, as told by James, was an exciting story that any amateur archaeologist (such as other BAS members and me), would appreciate, complete with finding the most exciting artefacts at the end of a day’s digging. How often has that happened to us!?!

James described walking the field for six or seven hours and finding nothing but rubbish. Having decided to give up and go home on the way back to his car he noticed some higher ground in the field and, knowing that people in the past often had settlements on higher, drier land, decided to do a final scan. All he found was a heavy cigar-shaped object, which he put in his pocket and, deciding to call it a day, went back to his car. Suddenly he remembered having seen a cigar-shaped Viking silver ingot in a museum. He went back to where he had found it, continued scanning, and soon found a hammered silver coin, which he recognised as being Anglo-Saxon. But James’ metal detector was giving a big signal, far too loud for one coin. He carried on digging and found … MASSES OF SILVER COINS! In all his years of metal detecting, James had never had such a moment!

Euphoric, he contacted the farmer-landowner, and then local FLO, David Williams, who advised extracting the visible coins, and then to stop digging, so that the site could be professionally excavated. The site was covered, and markers left in place.  But with the site so cleverly concealed from thieves, James then had difficulty finding it! After a visit by David Williams, who sadly passed away in 2017, the site was excavated. We saw pictures of the excavation, including the soil block (about the size of a large turkey), containing the hoard, which was to be taken to the British Museum (BM) for analysis and cleaning. We saw a delightful picture of David Williams grinning hugely on his ‘release’ from Security, where he had been held with the silver hoard, having been unable to unwrap it, to prove that it was not a bomb.

The Watlington Hoard, renamed ‘The Greasy Haggis’ by irreverent BM staff, had no deposition plan on X-ray, and had probably been in a leather bag, now rotted away. The hoard, valued at £1.35 million, comprised 203 Anglo-Saxon coins (many rare and some unique), fifteen silver ingots, three arm rings, two neck ring terminals, one piece of hack silver and one small piece of hack gold.

The coins of most interest were those of Alfred the Great of Wessex and Ceolwulf II of Mercia, which had on their reverses the Roman ‘Two Emperors’ design seen on Theodosius’ coin earlier, suggesting joint rule by two ‘kings’ of equal power. James pointed out that this is not the impression given by the Anglo-Saxon Chronicles, where Ceolwulf II is described as a ‘foolish thegn’. The coins come from a pivotal period, 875-880AD, in England’s formation, with Alfred defeating the Vikings’ Great Heathen Army at Edington in Oxfordshire, in 878AD. What the coins appear to show, is that Ceolwulf II was likely to have been an ally of Alfred, who helped win the battle at Edington, but who was then ‘written out’ of the history books, leaving Alfred the Great as the sole victor.

Using a map of the South of England, James showed us a likely explanation of why this, the first Viking hoard found in Oxfordshire, came to be there. Thus, after the battle at Edington, Alfred the Great allowed the thousands of Viking ‘prisoners of war’ to go to Cirencester, and then later, in 879AD, they moved to Cambridgeshire, possibly by way of Watlington, where the Viking hoard was found.

In the Q&A session, James explained that while the coins had been catalogued by Gareth Williams, Coin Curator at the British Museum, London, the entire Watlington Hoard is now in the Ashmolean Museum, Oxford.