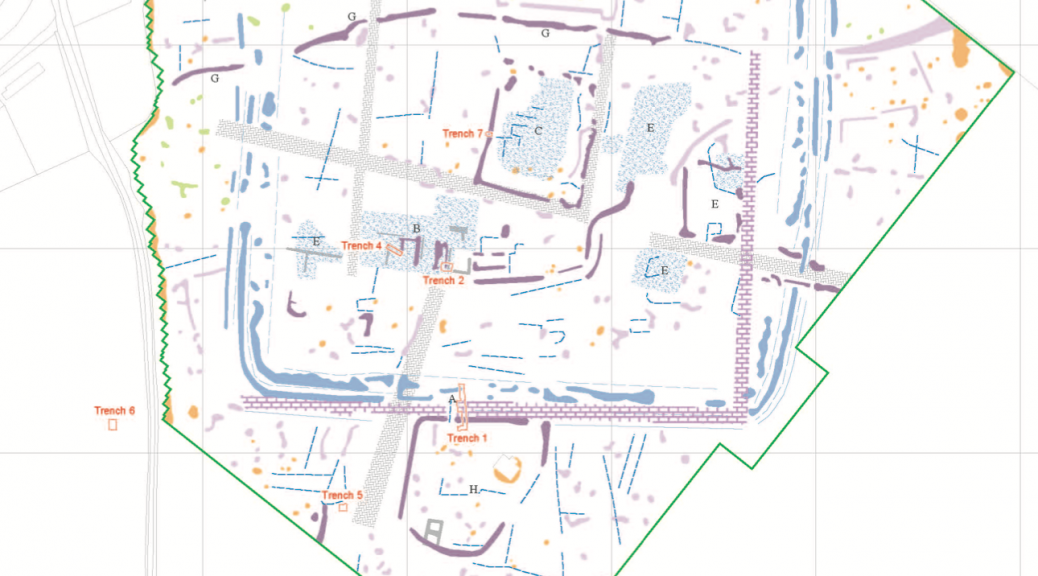 Keith very kindly stepped in at the last moment when the planned lecturer became unwell. His full essay will be published eventually as part of the Study Group series on Roman Berkshire. Meanwhile here is a summary of his talk.

Andrew briefly described the first Berkshire Roman Project undertaken by the Society and published in the 2018 Berkshire Archaeological Journal; “Land of the Atrebates: in and around Roman Berkshire’, where the subject areas were Roman infrastructure, the environment and agriculture, technology and production, and religion and the afterlife. The BRP2 project involves the collecting together of vast amounts of existing archaeological data and using it to understand the economics, society and power relationships that are embedded within that evidence.

With some 500 Roman sites across the Berkshire Region, it is necessary to divide the area into smaller, more manageable blocks. We were shown the data collection areas, each of which is being studied by BAS members. Today, we were to hear a presentation about the Mildenhall Area.

The Romano-British Community Around Mildenhall in Wiltshire, 55BC to AD410.

We looked at a map showing the extent of the Mildenhall Study Area. Another map showed underlying geology and topology, and Keith described how, for example, the Kennett Valley with its fertile alluvial soil was good for farming, whereas the Savernake Plateau had clay suitable for pottery making, and damp, heavy soils which gave rise to woodland, with wood then used as fuel for pottery industries.

An overview of late Iron Age sites displayed the archaeological sites of this period, such as an oppidum at Forest Hill, two shrine/temple sites, and many small settlement/farmstead enclosures (seen on LiDAR).

We looked at early Roman sites. An aerial photograph of crop marks showed the small town of Cunetio, at Black Field, Mildenhall. Cunetio had evolved from the probable fort, some of whose buildings, such as the mansio, were thought to have been incorporated into the new town. The town continued to grow during the 1stand 2nd centuries AD, with formal planning indicated by its regular street plan. Around AD150, in common with many other British small towns/vici/mansios, double-ditched defences were constructed, suggesting Cunetio’s official role as part of the Cursus Publicus.

At Forest Hill, on the site of the abandoned oppidum/military base, a luxurious villa was built in the 2nd century AD. Cunetio continued to evolve during the late-2nd  century/early 3rd century AD, with a new large mansiobeing built, and with Cunetio appearing in the late-3rd century AD Antonine Itinerary, again suggesting that Cunetio had an official role in Roman government/administration.

Evidence of prosperity is seen in the establishment and development of several large villas, including one at Littlecote. Further prosperity would have come from the Savernake Forest kilns and pottery industry. It is thought that an already established pottery industry of the late Iron Age had enabled the market to develop rapidly in the early Roman period. Cunetio’s situation at the intersection of several major roads enabled the wider distribution of the pottery, and hence the success of the industry.

We then looked at late Roman Sites. At Cunetio between AD360 and AD380, the double-ditched defences were filled in, and massive stone walls built across them and the established street plan. The defensive circuit had three entrances, including a monumental southern gateway opposite the site of the early Roman mansio, which was no longer in use. At this time, Cunetio acquired new large buildings, including a luxurious town-villa. From a chart displaying the dates of coins found at Cunetio (during a Time Team excavation), it was seen that coins from AD330-AD348 dominated the assemblage, suggesting a peak of economic activity/prosperity, with this pattern being atypical for British sites.

We saw how Littlecote had reached its peak as an agricultural villa in the later part of the 3rd century AD, with extensive rebuilding, and the addition of a bath suite, corn drier, and other structures. A building adjoining the Kennet suggests use of the river for transport.

In the 4th century AD, at about the same time as Cunetio’s stone walls were built, Littlecote was redeveloped as a religious site. Unique in Roman Britain, an extraordinary building housing an ‘Orpheus’ mosaic is thought to have been a ‘Bacchic-collegium’, built during the reign of the pagan emperor Julian the Apostate (AD361-AD363). With Bacchic cults being popular with the Roman military, the owner of the villa may have had a military connection, and/or a senior official position at Cunetio.

Coin evidence suggests that agricultural activity at Littlecote had ceased by the mid-4th century AD. A similar peak of prosperity, followed by a rapid decline in the late-4th century AD is seen at Castle Copse Villa, where a late Roman military buckle suggests a military connection for the owner.

Keith discussed the atypical findings of this study of the Mildenhall Area. Earlier, Cunetio’s development had been similar to that of other Romano-British small towns, with it becoming a distribution centre for a growing agricultural and industrial economy, and with it building defensive ditches in the mid-3rd century AD. However, in AD360-AD380, Cunetio invested a huge amount of money in the building of stone walls and monumental gateways. The fact that the probably militarily-connected owners of nearby Littlecote and Castle Copse Villas did not build any defences when they rebuilt at this time, appears to show a lack of concern in the northern frontier violence and warfare, or worry about other invaders stealing their wealth.

Thus, it is likely that Cunetio built its walls not for defence, but to display the status of its possible role as a regional administration/tax collection centre and military base for the province of Maxima Caesariensis, with important government officials living in the luxurious town-villa. The coin finds at Cunetio showing an unusual peak in AD330-AD348, which is not seen in other Romano-British towns, supports an influx of ‘new money’/people at this time.

This report is a very brief summary of Keith’s presentation, which included a large amount of data from several archaeological sites. We were told that BRP2 data continues to be evaluated, especially as new evidence is found and that BRP2 essays would be going up on the BAS website as they are completed.

Many and sincere thanks to Andrew Hutt and Keith Abbott for interesting and well delivered talks and for standing in for the scheduled speaker at only 3 hours’ notice.

Image: Geophysical survey of Cunetio and plan of trenches by Time Team, published by Wessex Archaeology