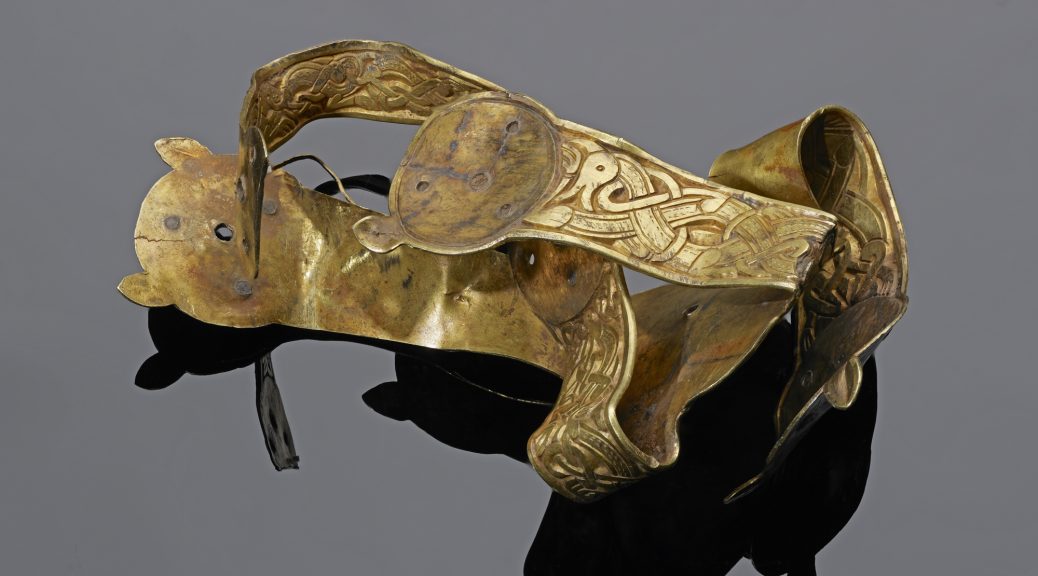 A talk given to BAS by Dr Eleanor Blakelock, 17th November 2018

A massive hoard of gold and silver objects was found by a metal detectorist in a field near Lichfield in Staffordshire in 2009. The splendour of these objects attracted world-wide attention and the hoard was hailed as a new Lindisfarne Gospel, a new Sutton Hoo, and an archaeological ‘mirror’ of Beowulf. It consisted of more than 3500 fragments and objects and it is the largest Anglo-Saxon hoard found to date. Much of it had a military character, comprising hilts and pommels of 40-60 swords, helmet cheek pieces and similar decorative items, and it is possible that the hoard represents war booty. The absence of iron during a period when pattern-welded sword blades were intrinsically more valuable than the hoard itself, suggests that these were probably reused since they are harder to recycle.

A large proportion of the fragments represent a single helmet which is under reconstruction. This helmet is of a higher status than the famous Sutton Hoo helmet, and more of it remains. All the pieces, which would originally have been mounted on an iron or copper alloy framework, are quite small and the entire hoard would have fitted into one bag, which may be represented by a small fragment of textile. The present market value of the hoard was estimated at £3.2 million: this sum was raised by an international fundraising effort in less than ten weeks. It is now owned jointly by Birmingham City Council and the Stoke-on-Trent City Council and the objects are spread between four museums: the exhibits at Birmingham and Stoke are particularly recommended.

Eleanor Blakelock is a metallurgist who has conducted research on the hoard both at the British Museum and the University of Birmingham, analysing the gold, attempting to identify workshops and studying the effects of the burial environment. She looked at about 150 objects from the hoard together with comparative material including 43 items from the Sutton Hoo assemblage. The analysis was conducted using a combination of XRF (x-ray fluorescence) and SEM (scanning electron microscope) techniques. The items were dated typologically and range from c.AD 560 when silver was the primary metal, followed by a period when gold predominated, to c.AD 630 when silver came back to the fore. This wide date range indicates that some of the objects were heirloom pieces. Other materials in the hoard included copper alloys, garnets, glass, and niello and enamel inlays.

Natural gold is not pure and can contain up to 40% silver and 1% copper. The Anglo-Saxon goldsmiths appear to have manipulated its properties by alloying gold from different sources. The Staffordshire Hoard contains a range of different gold compositions containing up to 30% silver. A shortage of gold during the Anglo-Saxon period is reflected in the debasement of gold currency, and Eleanor attempted to compare the hoard gold with datable coins but there were too many variables and no clear pattern emerged. No clear regional grouping of workshops could be determined either, although some of the objects appear to have been manufactured in Suffolk. There was no obvious link between object function and the alloy used but plenty of evidence for recycling and mixing of gold from different sources, including Roman coinage.

Surface enrichment, whereby silver and copper are removed from the alloy to leave purer gold on the surface, can occur naturally in the burial environment. However, some of the objects had lost up to 40% of their surface silver suggesting that another factor was responsible. Items could have been immersed in an acidic bath, but this is unlikely as some pieces were enriched on one side only. It seems more probable that a paste was applied to the surface, and a search for ancient paste recipes showed that all contained salt and some also contained sulphur. Further analysis of the hoard objects showed that sulphur was present in areas where depletion had occurred, whittling the possible recipes down to three sources which were more or less contemporary with the Staffordshire Hoard: the Leyden Papyrus, the Codex Lucensisand the Mappae Clavicula. The technique probably has a more ancient origin and more research is needed. Separate components of individual objects were artificially enriched to enhance the colour contrast between them. For example, the body of a sword pommel had been enriched to render it more yellow against the paler non-enriched cap and filigree wires that formed an intricate pattern against the body. Surface enrichment was employed throughout the period and is not related to object. Instead there appears to have been a male/female divide. Items associated with men were heavier and tended to have a higher gold content; items associated with women, such as brooches, had a higher silver content but were enriched to appear the same colour as the men’s items.

Filigree technique was commonly used. Gold wires were made by twisting the metal and then given a ‘beaded’ appearance by squeezing the wire in a small hand-held mould that was moved along the wire. The wires were cut into short segments and soldered onto the body of the object to simulate an entwined pattern: the wires did not cross over each other. For inlays, cell walls were soldered on to the body and filled with an organic material before a small cross-hatched piece of gold foil was inserted underneath the garnet inlay in order to make it shine. The garnet was first cut to shape and once it was in place the surface was burnished so the cell walls bent over slightly to hold the stone in place. Recycled Roman glass fragments and Anglo-Saxon green glass were used for inlays using the same technique. Niello, a silver sulphide compound that polishes to a shiny black, and enamels were also used for inlays. ‘Anglo-Saxon green’ is an unknown powdery substance found in some inlays that could represent the copper component of degraded red enamel. Analysis showed that the solder used to fashion these objects was copper-based.

A close examination of the different parts of a single object can provide insights into the object’s history. A seax set with four components showed that the pommel cap was of poorer quality gold and probably a later replacement. The hilt plates were different in that when the goldsmith replaced one he enriched the gold so that it matched the rest (but only on the side that showed) whereas the second plate was not enriched at all. This suggests that the second repair was less costly or that the goldsmith did not recognise the technique. Together these observations represent three phases in the life of a single object, which was probably a family heirloom passed from father to son.

The Staffordshire Hoard may represent payment for soldiers comprising looted material. Why it was buried and why it was not retrieved we shall never know. A book is to be published early next year and there will be an online database of research reports. For anyone particularly interested in this subject, Eleanor recommends the website of the Historical Metallurgy Society.

Dr Eleanor Blakelock, Metals Specialist, works at Birmingham Museum Conservation studio as one of two Esmee Fairbairn positions. She is a trained archaeometallurgist, a scientist that investigates ancient metals and metalworking techniques