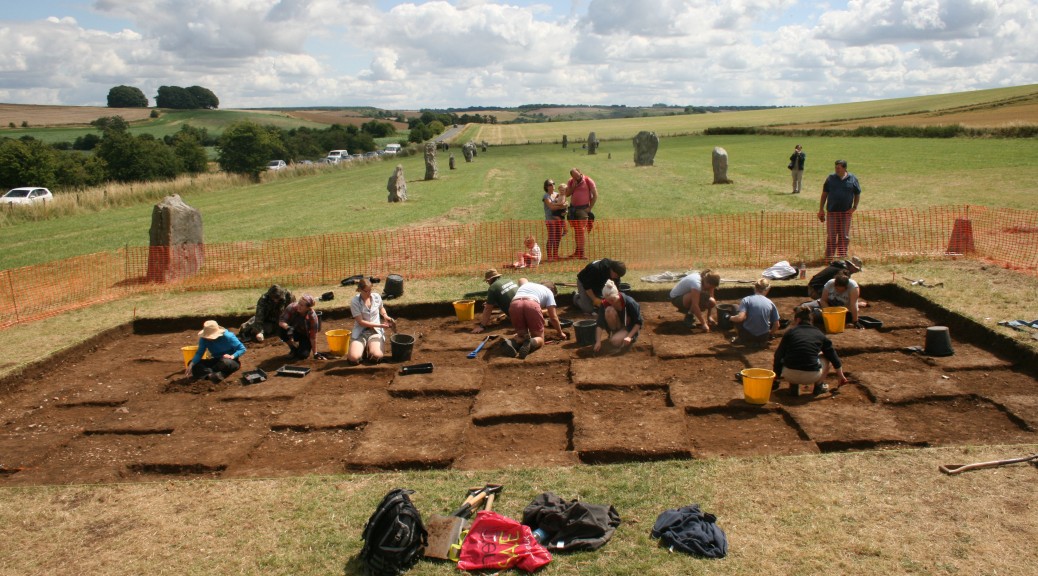 Settlement and Monumentality in the Avebury Landscape

A lecture given to Berkshire Archaeological Society on Saturday 16th February 2016 by Dr. Joshua Pollard

This was a fascinating talk about Josh’s search for the routine of daily life amongst the complex of monuments which surround the Henge at Avebury and nearby at Windmill Hill, a cause-way enclosure used for large meetings where feasting and goods were exchanged.

Josh had received permission from Historic England and the National Trust to open trenches in The West Kennet Avenue close to the site where Alexander Keiller had excavated in 1934. The Avenue is 2.5 km long and there are 100 pairs of standing stones on either side as it leads to the south entrance of the Henge. It is clearly a processional way but there is evidence of people living on its route in the Mesolithic period where flints of the time were found in pits which were subsequently enlarged and used by the Neolithic population. Dates for the Neolithic period vary from one part of Britain to another but the date for the Neolithic on the North Wiltshire Downs starts at 3,900/3,800 BC and ends when monument building ceases and the Bronze Age starts at 2,300 BC. The site was selected by field-walking and looking for flint scatters and tools on the surface. Unlike most of the Wiltshire Downs where the chalk is immediately below the grass, the site was on good quality loam with no chalk. When the turf had been stripped off, flint tools, worked flints, discoidal cores (circular in shape with convex sides and a sharp edge), scrapers and even an exotic mace head showed up immediately. Of special interest was a cache of chisel headed arrow heads. Replicas were used to test the flight characteristics of this type of arrow head and to see what damage they could do. They did not fly well at all due to a tumbling motion and, when they hit a target, did little damage. Their range was limited to 10 m, outside this range they were useless! (Many of these have been found in southern England and are shown on the PAS website, author’s comm.). There was no evidence for hearths or houses, but Josh did find that people had been living in large tree throws, presumably using the roots to support a cover. He also found a training ground for flint knappers, proven by numerous badly made arrow heads!

The early Neolithic in this area (3953-3767 BC) was a period of immigration from the continent whose people introduced Peterborough ware and mixed farming. Evidence of farming was provided by linear crop marks found in the trenches. At the Neolithic/Bronze Age transition (c. 2,300 BC) monuments had ceased to be built and arrow heads had changed to the tanged and barbed style and Bronze Age beakers were introduced.