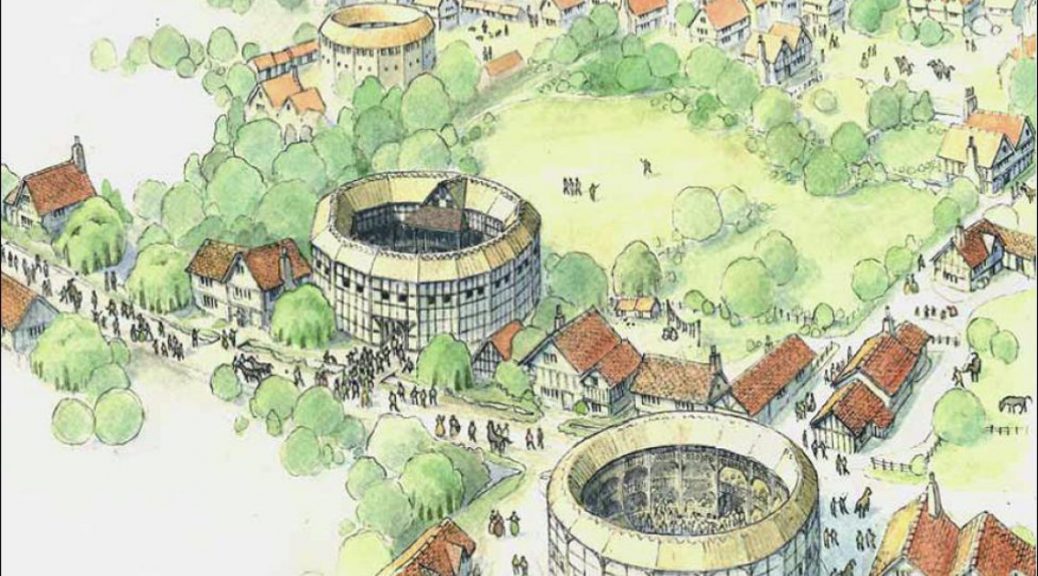 During the reign of Queen Elizabeth, and James I up to the start of the Civil War London became alive with playhouses and theatres. No fewer than ten theatres were built on the banks of the Thames, sponsored and built by impresarios to meet the pent up demand for entertainment following the religious mayhem of Prince Edward and Bloody Mary. Julian gave an excellent round-up of the ‘playhouses’ (open air sites and ‘theatres’ roofed and lit by hundreds of candles).

Richard Babbage (1567-1619) is perhaps the most famous playhouse builder, manager and actor. Richard and his brother Cuthbert, owned Blackfriars Theatre known as ‘The Theatre’ which was taken down and then re-erected on the South Bank and called ‘The Globe’ in1599. Shakespeare owned half of the equity. Burbage was performing at the Globe in June 1613 when it caught fire and was destroyed and rebuilt again. Julian excavated the site in 1989 and found it was a polygonal shape with 16 sides. It had a yard for the groundlings and galleries accessed by an external staircase.

Jerome Savage, ‘a verrie lewed fealow’ leased the Newington Playhouse in Lurk Lane (!) later the Walworth road. Philip Henslowe, a fellow impresario, who kept a record of several theatres, their construction, plays and actors (his documents were put in Dulwich College library in 1619) documented the plays put on by Savage. In 1594 Savage put on Hamlet, Titus Andronicus, and the Taming of the Shrew. The theatre was built by two carpenters, James Burbage and John Brayne.

Henslowe and John Chomley sponsored the Rose theatre in Bankside, built by John Griggs in 1587. Plays by Christopher Marlow were mainly performed here but, bubonic plague struck London in 1592 and most theatres were closed for two years including the Rose. When it was excavated in 1989, staff at MOLA found it was another polygonal theatre of 14 sides with a staircase to the upper galleries. Under the stairs were the remains of fruit seeds and hazelnuts in large quantities, so many, that when the yard was extended to accommodate more groundlings, hazel nuts and clinker were mixed with the cement to form the floor.

Another theatre sponsored by Philip Henslowe and his stepson, the leading actor, Edward Allen was the Fortune theatre. This time it was square building 80 x 80ft of three stories with galleries at all levels. The galleries reduced in height as they went higher, starting at 12ft high ceilings and reducing to eleven feet and nine feet for the top floor. Admittance charges did the reverse, 3d for the lowest, 2d for the middle, and 1d for the top story. In 1623 the theatre burned down and was rebuilt, but it was closed by the Long Parliament in 1642.

Just a few hundred metres north-west of the Globe on the Bank Side, Southwark, Philip Henslowe and his new partner, Jacob Meade acquired an old bear garden and sponsored the Hope theatre. They contracted Gilbert Kathereus to demolish the former buildings and build the new theatre for £360. The contract still exists and it specified that the building should be used for, ‘players to playe in and for the game of Bears and Bulls to be bated and a stage to be carried and taken awaie, and to stand on tressels’. Animals needed to be quartered there to. It was opened in October 1614 and Ben Johnson’s Bartholomew Fair was an early production. Johnson described the place as, ‘dirty as Smithfield and stinking every whit’. Other actors agreed with Johnson and stopped performing there in 1619. After that the Hope was used for Bear baiting, prize fighting and fencing. Samuel Pepys records that he went to watch plays and dally with friends and others. The theatre closed along with others in 1642.

Whilst the playhouses mentioned above were not roofed, there were ‘indoor playhouses’ that were the origin of our modern theatres. For example Middle Temple Hall with its fifteenth century roof and hall put on Twelfth Night. There were others at Hampton Court and Greenwich Palaces which were expensive.

Julian found a great variety of artefacts in his excavations. Pottery piggy banks in which to keep money, a cannon ball to roll about in a wooden trough to make the sound of thunder, silk bands from shirts, hundreds of bangles and pins to hold farthingales and ruffs.

The rush to build Elizabethan theatres produced some extraordinary characters, many of them ruthless capitalists who worked hard to become rich. Philip Henslowe was the king impresario and entrepreneur. He had many trading companies, he was a pawn broker, timber merchant, starch maker and dyer and he sponsored the Rose, the Fortune, the Hope theatre and the Bear gardens.

Illustration by Faith Vardy: A reconstruction of Bankside c.1602 showing the Globe (B1, phase 1) in the foreground and the Rose (B2, phase 2) behind.