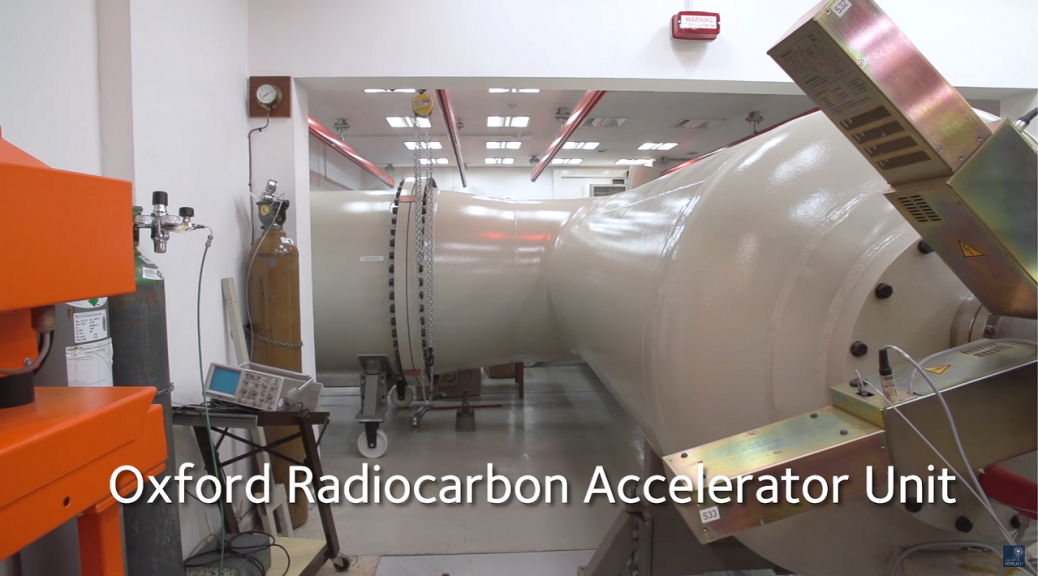 On 22 June 2018 a group of members visited the University of Oxford’s radiocarbon accelerator, an amazing room-sized device of shiny steel tubes and banks of blinking lights that measures carbon-14 to date organic remains. The lab was established in the 1950s after a groundbreaking paper by American scientist, Willard Libby (1908-1980), on the subject in 1946.* Libby worked out the half-life of radiocarbon (carbon-14 or C14), a radioactive isotope of carbon, as 5730 years. Every living thing contains carbon, but stops taking it in when it dies. This means that when a sample’s radiocarbon is measured, originally with a Geiger counter, the amount left indicates how long ago that organism died, providing a revolutionary method of absolute dating, reliable up to about 50,000 years ago.

In the 1960s, it was realised that the amount of carbon-14 in the atmosphere fluctuated at different periods of time. Radiocarbon results therefore always need to be corrected against a ‘calibration curve’ created using other absolute dating methods, such as dendrochronology (tree-rings). The resulting ‘wiggles’ in this calibration curve are actually called that! Unfortunately though, we learned that radiocarbon stayed at the same rate during the Iron Age and plateaued for about 400 years, so trying to collect C14 for that period is pointless! In 1963 carbon peaked to twice its natural level because of nuclear testing. (It is now declining again.)

There are about 20 labs in the world that can do this work. Oxford’s is unique as it is almost entirely focussed on archaeological samples. Their current accelerator was designed and purpose-built from scratch, and dates from the 1980s when there was a further ‘revelation’ that refined the technique even further and meant that smaller samples than previously could be used. Now only about 1cm²of bone or single charred grains can be dated reliably and specifically. ‘Single entities’ that grew only within one year give the best dating evidence, such as a bit of bark or a seed. About 45% of the lab’s samples are bone, and they have used their expertise to help in missing person and forensic cases as well.

Quirks of the technique, however, are that bog bodies come out older than they actually are because they get stained by humic acids from the breakdown of plants in the water, which have C14 of their own in too. River fish and seafood have different levels of C14 in them than land-based plants and animals (for example, hardwater contains calcium carbonate, including C14), so it is also more difficult to date the bodies of people who ate these. Mesolithic people had a varied diet, making use of the sea and land, so are difficult to date as result, for example. Neolithic people ate a more land-based plant and animal diet, so are easier. The amount of C14 also varies throughout different parts of the body, but can be offset against stable isotope information, which is increasingly requested anyway, as an indicator of differences in diet between sexes or social groups.

Any errors in the following scientific description are mine!

Samples are cleaned in ‘pre-treatment’ processes that take about three weeks and the lab has forty different processes for different types of material. For example, bones are 20% collagen, which is the bit that is needed. The sample is put into a test tube of acid that breaks down the mineral content (‘gelatinisation’!) and is heated in an incubator. (Interestingly this means that younger people are easier to date than older people because collagen turnover slows down as people get older.) The sample is then combusted in tin capsules in a helium carrier at 1000°C and sulphur is trapped. It is then heated at 600°C with copper to absorb oxygen and the nitrogen gases off.

The sample is run through a mass spectrometer, which fires off electrons, like a Tungsten lamp. The ions are collected by a magnet and any remaining nitrogen is vented off. Liquid nitrogen freezes any remaining oxygen and solid CO2 is collected. This gets ‘graphitised’ at temperature and compressed into a 2mg pellet with a drying agent to remove any excess water. The pellet is put on the end of a tin pellet and loaded onto a wheel. Each wheel has 59 positions on it, but only 57 are taken up with samples. The other two, at the beginning and in the middle of the sequence, are taken up with samples from known tree-ring-dated wood as the control group. This then loaded into the machine.

Caesium is fired at the wheel knocking out the carbon within the samples. The resulting ‘sputters’ pass through an electrostatic beam. The heavier the electrons, the less the beam bends. 99% of the carbon is C12, most of which gets split off in the beam. The leftover C13 and C14 is fired through a tube insulated with high density gas at a high voltage and at 20m a second. This strips off some of the electrons. As C12 is similar to C14, some still gets through to this stage, but it is split off again with magnets. C14 then flashes in low pressure gas and this is what is measured. We saw this as a red light blinking on a panel in the control room, sent there via fibre optic cables. Software is then used to eliminate the isotopes that are being counted, and the ratio between C12 and C13, C13 and C14 is measured.

The technology has come along so far now that radiocarbon accelerators are available ‘off the shelf’ at only 3m long from a company in Switzerland. They no longer need the big magnets and are 10% more accurate. However, you will need half a million pounds if you fancy getting one for your living room! (Oxford’s new machine was due in November and they will be run alongside each other for a while until the old one is given to Physics students to train on, repurposed to measure something else or given to another institution.) Alternatively, getting something dated is a snip of the cost at about £350 per sample and takes a couple of months to provide or only a day, if you are not worried about precision. Something for the Christmas list?

*Libby, W.F. (1946). ‘Atmospheric Helium Three and Radiocarbon from Cosmic Radiation’, Physical Review69 (11-12): 671-2. He had previously worked on the Manhattan Project and received the Nobel Prize for Chemistry in 1960 for his work with radiocarbon.