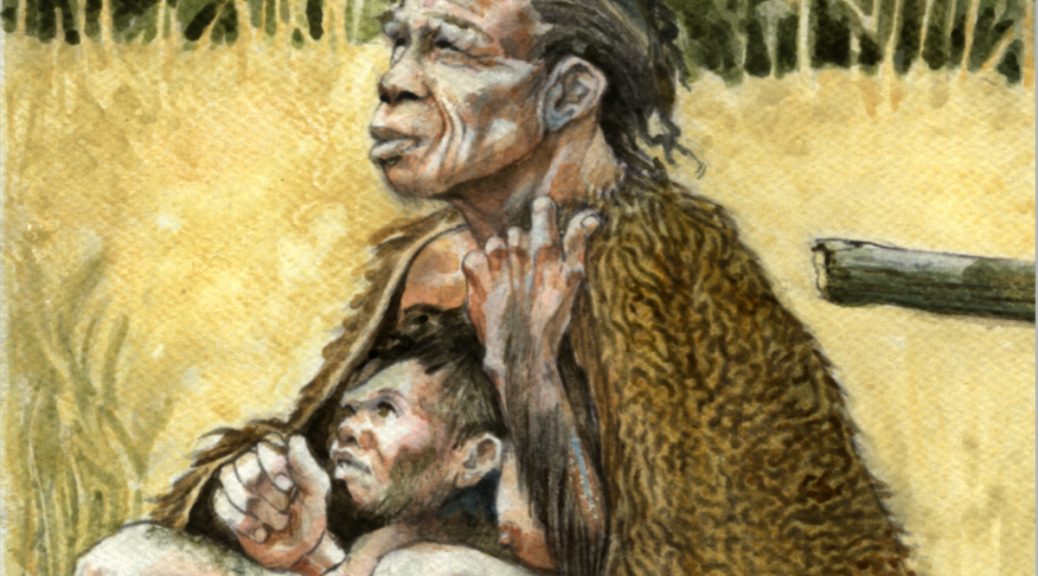 A talk by Professor Rob Hosfield, University of Reading, on Saturday 19th February 2022

Rob Hosfield’s talk took us beyond the ‘stone and bone’ artefacts of Lower Palaeolithic archaeology, to describe the life of hominids living between 1.5 and 0.5 million years ago, when the European climate was seasonal and temperate. Rob’s seasonal perspective would indicate how such people managed to survive.

Such hominids almost certainly lived in groups of around twenty to thirty. They had large brains, only 10 – 15% smaller than ours, and had developed an effective technology in stone. They must have communicated with each other, probably not with language as we know it, but well enough to live together successfully. They faced predators such as wolves and hyenas, and at times scimitar-toothed cats and giant hyenas.

Their climate fluctuated dramatically. Cores taken from ocean floors and the Arctic show variation from very warm (hippos in the Thames, for example) to cold enough for ice a mile thick all over Britain. Hominids first appeared in Europe about 1.5 million years ago, dispersed at first only around the Mediterranean, but spreading by about 0.5 million years ago north of the Pyrenees and the Alps and into southern Britain.

A seasonal approach recognises the challenges and opportunities for life at different times of the year. Although archaeological sites of the period can be dated only to within c.50,000 years, the remains of small animals can indicate, through their known climatic tolerances, the contemporary climate.

Beginning his seasonal survey with the spring, Rob suggested that early hominids probably saw childbirth tending to occur in late spring. (Conception is likely to have been concentrated in late summer when people were best fed and at their healthiest.) Compared with the offspring of great apes, hominid infants experienced dramatic early brain-growth, requiring early weaning and a good supply of solid food.

Dental wear on skeletons shows that most people died in their twenties and thirties. Without significant numbers of grandparents, the food for weaned infants was probably provided by siblings. Spring would have brought an abundance of food sources (e.g., the eggs and young of other species) which were reasonably safe for children to forage for.

Seasonal synchrony of reproduction seems to enhance the support by males of pregnant females and makes it harder for a single male to dominate several females. This may constitute the beginning of pair-bonding: a theory supported by a reduction in sexual bimorphism (differences between the sizes etc. of the sexes). It would fit in with the custom of food-sharing more generally.

Springtime probably saw early palaeolithic groups moving into smaller core territories where food was abundant, in order to get through the period of giving birth and early infancy. Females probably initiated such moves.

Remains of snakes, voles, and molluscs (for example) show the ambient summer temperature in typical palaeolithic sites in Britain of 15 – 20ºC, with 20 – 25º in Germany and 20 – 28º in Spain. Summer would have provided not only plenty of food, but significantly longer days for hunting and gathering. The season would have been a key learning period for early teenagers while there was less pressure on them simply to acquire food. They would have developed technical skills (making stone tools and wooden spears), acquired knowledge (for example about fungi and animal tracking), and possibly how to make fire.

Glimpses of summer activities can be found in the archaeological record. At a site known as Charco Hondo near Madrid, tool-making material has been found on a plateau, though the stones for the tools had been gathered in riverbeds below and beyond the plateau. Young adults would probably have accompanied such expeditions.

At Schöningen in Germany, high-quality spears have been found, with shafts well polished to improve their aerodynamic behaviour when thrown. Growth-rings in the wood show that it was acquired in the summer, wood being easier to work when ‘green’.

The period between 500,000 and 300,000 years ago saw various appearances of hominids in Britain. The different phases show particular predominating shapes of hand-axes, probably indicating copying by unskilled younger people of their elders’ work.

Summer, despite relative richness of resources, cannot have been idyllic. Work on reptiles in southern Europe shows that the climate was often very dry, producing its own challenges. In summer, herd-forming animals tend to split into smaller groups which are harder to find. It must be remembered that at least 50% of hunts are unsuccessful.

In autumn, many prey animals such as deer, horse and bison gather in larger groups for rutting (concentrated evidence of autumnal bison remains has been found). Larger groups moving together are easier to track. Such herds may have attracted more than one hominid hunting group, thus offering the chance of inter-breeding. Finds of bones have shown cut-marks on the bones which produce the most meat, indicating that the carcases were hunted rather than scavenged. Occasional evidence of skinning is another sign that hominids killed the prey before other predators reached it.

It seems that (for example) a hunted group of a stallion with some mares would have provided 400 – 1000 kg of food, in addition to other valuable resources such as fat, marrow and skins. Autumn was the best time for hunting: the prey was in better condition than during the winter. Food must have been stockpiled for the leaner months ahead. Without evidence of storage pits or drying racks, one must suppose that meat was buried in the ground or stored in cold water (a practice used by modern Inuit). Experimental archaeology indicates that a large haunch of horsemeat kept in a pond can still be nutritious many weeks later.

Winter temperatures would have been around 7 – 11º (Britain), 0.5 – 13º (Germany), or 2 – 12º (Spain). In addition to lower temperatures, hominids would have faced wind-chill and rain. Mathematical modelling on skeletons shows that, even allowing for greater muscle-mass and increased metabolic rate, hominids would have required some kind of insulation. Body hair, extra brown adipose tissue, or clothing are all possible. Keeping the young warm would have been critical. Seasonal migration from north to south to seek a warmer climate is unlikely, given the necessary distances. Occasional glimpses of skinned herbivores are found, sometimes of beaver or bear. These suggest some kind of clothing; although without treatment, hides would quickly have become useless. Treated hides – using fat, for example – would have lasted for months and could be used as covers during sleep. Though few examples exist of rock or cave shelters, tree-throw pits and fallen trees could have been used. Traces survive of making fire with pyrite or flint, though the use of fire has its drawbacks, particularly the effort of gathering fuel. Fire was probably not a constant companion, but a luxury used when really necessary.

In summary, a seasonal perspective of the life of early palaeolithic Europeans allows us to construct a picture of what their life was like. In addition to having a powerful build and being manually dexterous, they must have been supremely cognitively skilled.

Rob’s new book is out: The Earliest Europeans – A Year in the Life: Seasonal survival strategies in the Lower Palaeolithic (available open access at: https://books.casematepublishers.com/The_Earliest_Europeans.pdf)

Where copyright permits you can find post-print copies of my other publications at: http://centaur.reading.ac.uk/view/creators/90000911.html

Cover image: This is a reconstruction illustration from my recent 2020 book (it’s a female Homo heidelbergensis, with infant). The artist is Mark Gridley