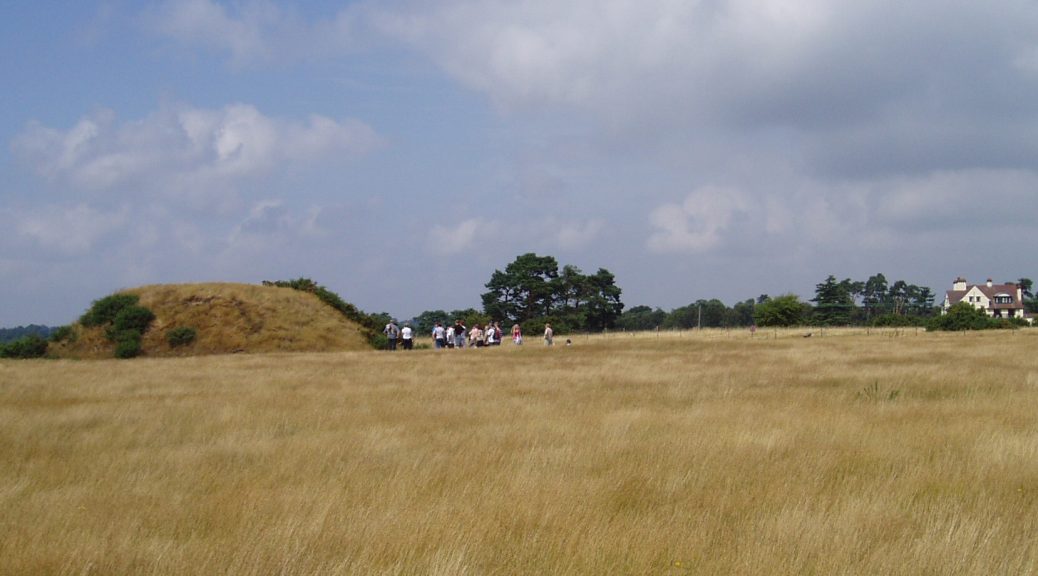 A lecture given to BAS on Saturday 15th January 2022 by Dr Jennifer Foster, University of Reading

Jennifer Foster gave us a spirited and well-illustrated talk on the Anglo-Saxon ship burial at Sutton Hoo in Suffolk.

The Sutton Hoo Estate was bought in 1926 by the Pretty family. Mrs Edith Pretty became fascinated by the mounds there and in 1939 she asked the local archaeologist Basil Brown to excavate Mound 1, with a few helpers. Once the site’s significance became evident, eminent archaeologists joined in including Charles Phillips, O.G.S. Crawford, Stuart and Peggy Piggott and William Grimes.

The first find was the ship. No wood survived but the many iron rivets remained in place and the memory of the wood remained in the sand. The burial was found inside the ship, which had been hauled up from the river Deben. It mattered that the river and sea were visible from the burial site, in keeping with the Germanic and European burial tradition.

The finds were spectacular. They included a silver dish from Constantinople, a Coptic bowl, silver bowls, cups, spoons and ladles and the famous purse lid and buckle. The latter both show magnificent cloisonné work (inlay) with garnets carefully cut to fit inside the gold design, with stamped foil placed behind them for extra effect, The garnets came from India and the Czech Republic. The burial body had decayed in the acidic soil but was located by a high-phosphate area without finds. The person was clearly a warrior, equipped with helmet, sword, shield, axe-hammer, spears and pikes and maybe a sceptre. There was evidence of feasting at the burial: a cauldron, buckets and bottles for drinking, drinking horns (from aurochsen, clearly imported as these giant cattle had died out in Britain by then) and maplewood drinking cups. There was a bowl, perhaps for handwashing, and a curious large iron candlestand which may have been lit as a signal or incorporated in the burial ritual.

The burial feast would probably have been accompanied by a recitation (like Beowulf) and music. A maplewood lyre with six strings and tuning pegs was found in a beaver skin bag and has since been reconstructed. People were entertained at feasts like this from the Late Bronze Age onwards in Europe, with drinking horns and gaming pieces appearing in the Iron Age. Anglo-Saxon warrior burials typically had many hand weapons and, as in the 5th and 6th centuries, these equated with manhood. This burial rite had died out by AD 800.

The Sutton Hoo ship was originally dated to AD 650-660 by coin evidence but is now redated to AD 625. All the objects are pagan except for two ‘Paul’ and ‘Saul’ silver spoons, possibly of Christian origin. The most likely king in the burial is now thought to be Raedwald (d. AD 624-5). The probable burial ritual is hinted at in Beowulf where the writer, describing another burial, refers to “wayfarers widely visible”. The ship would have been brought up from the sea and the river Deben, the body placed in it surrounded by the treasures, then a wooden cabin built over this, and everything earthed up to a mound.

So where did these Anglo-Saxons live? At West Stow Anglo-Saxon village (some way away and open to the public) houses have been reconstructed using the post-holes of an earlier excavation, giving a good impression of a settlement. At Rendlesham (5km away) a huge hoard was found in 2016 at a ‘King’s Palace’, suggesting the Sutton Hoo grave’s occupant may have lived there.

At present an excavation is taking place at Sutton Hoo ahead of a new gallery, which has found settlement evidence from the Bronze Age to the Romans. The acidic sandy soil may have been more fertile for settlement then. A viewing tower is proposed for the whole Sutton Hoo site and there is an excavation ahead of this too. In 1983, excavations to the east exposed further Anglo-Saxon mounds and a flat cemetery from 500 years later. Postholes for a possible gallows were uncovered together with beheaded bodies. Similar Anglo-Saxon mound excavations took place in Taplow (1883, dating to AD 620), at Prittlewell (near Southend, 2003) and at Montem Mound (Slough, 2016). Taplow and Prittlewell revealed similar material to Sutton Hoo, as did the Staffordshire Hoard (2009, found in a flat field), showing that cloisonné inlay techniques were widespread in Britain then.

A new replica ship is currently under construction by the Sutton Hoo Ship’s Company. It will be 32m long with an 18m long keel made from a single oak tree and progress in the workshop can be watched from a viewing gallery. Jennifer gave her approval to the film ‘The Dig’ starring Ralph Fiennes (Basil Brown) and Carey Mulligan (Edith Pretty) where, before filming, the actors were all taught to excavate correctly. The film was filmed ‘backwards’ with the fibreglass ship gradually filling with soil. The original excavators at Sutton Hoo did an excellent job, many going on to careers in archaeology, although sadly Basil Brown was side-lined, despite his expertise. Edith Pretty died in 1942, after donating the finds to the British Museum where they are one of the star attractions.

Jennifer’s talk was colourful and enthusiastic and has certainly left me keen to revisit the site and to see the construction of the replica Sutton Hoo ship in progress.

Title image: the ship mound with Edith Pretty’s house in the background