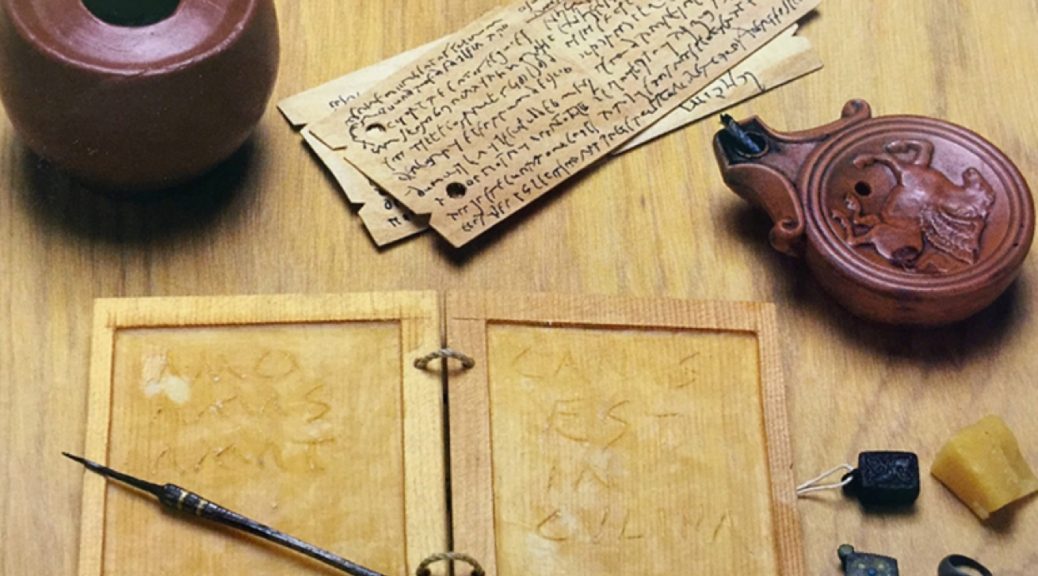 The archaeology of Roman literacy

A talk by Hella Eckardt, University of Reading, given to BAS on 20th January 2018

In her talk Hella explored the material culture associated with Roman literacy and assessed the strengths and weaknesses of the archaeological evidence. Literacy is related to power and identity; it enabled an individual to rise through the ranks of the Roman empire. The level of literacy within the empire has been estimated at 15%, but this would have varied enormously according to time and place and individual ability.

The most important material associated with literacy is the durable papyrus scroll. Those found preserved at Herculaneum were already over 100 years old at the time of the eruption of Vesuvius. Roman sculptures show that scrolls were written on the knees, not on a table, with one knee held higher than the other to create tension. Scrolls were stored in cupboards or in purpose-made lockable wooden storage boxes.

Wax tablets were another important medium, consisting of flat rectangular wooden tablets with a shallow recess covering most of one side to accommodate a layer of black wax. This was inscribed with a metal stylus that cut through the wax to reveal white lettering on the surface of the wood beneath. Where these wooden tablets have been preserved by waterlogging, the messages on them can be read from the impressed letters. But tablets could be reused and the interpretation of superimposed writing is difficult. Wax tablets were used for important documents, such as wills, which were meant to last: bundles of tablets were tied together with string and sealed with wax. A third, more ephemeral, medium was the wooden leaf tablet which was inscribed in ink. The distribution of wooden tablets in the archaeological record reflects the distribution of waterlogged conditions and not the distribution of literacy itself.

Some of the more attractive objects associated with literacy were metal seal boxes, which were small, often decorative, and hinged in two parts. They were used in association with tied bundles of wax tablets and often had holes for the passage of string. The seal box was filled with wax which was impressed with the signet ring of the owner and then closed to protect the seal. Although this device could not protect the written contents, a broken seal would show if the tablets had been tampered with. Some seal boxes preserve their wax contents and fragments of the string used for binding the tablets together. In some cases the ‘string’ appears to have been leather, suggesting these little boxes were also used to seal leather bags containing coins or other valuables.

Metal spatulas were used to spread wax on the tablets. These had an iron blade which could be heated (and is usually missing) and a bronze handle which often depicts the head of Minerva, the goddess of literacy and learning. Since these objects are not dependent on waterlogging for their preservation, they have a wider distribution than wooden tablets. However, the bronze handles may have been curated as votive objects and in themselves they are not indicative of literacy.

Scrolls and wooden leaf tablets were written in ink using a pen made of reed or bronze. Reed pens needed to be constantly re-sharpened, and associated objects include penknives for this purpose along with ink pots and bronze ink stirrers, and sometimes dividers. Roman ink came in two colours: black ink made from soot or pitch pine in a solution of gum, and red ink (used exclusively for headings) made from various red materials such as cinnabar. Wall paintings from Pompeii depict a whole range of objects associated with writing, including money bags which demonstrate the connection between literacy and numeracy. Not all the objects depicted on a monument to a Roman manufacturer of writing implements have yet been identified.

Inkwells came in a range of different shapes and sizes but were usually cylindrical and free-standing and often had intricate double lids. Most held less than 50 ml of ink but some were much larger, up to 300 ml capacity. Metal inkwells were introduced in the late 1st century and were most popular in urban sites although some have been found at villas and other, especially high status, rural sites. Samian inkwells were largely restricted to large towns and military sites. Inkwells are also known from burials, hoards and ritual deposits, where they may have been placed to denote the fulfilment of a vow. Double inkwells were not used after the 1st century, suggesting that two ink colours were not used after that date.

The Romans liked to boast that they were literate and men, including soldiers, are often depicted with writing equipment. Roman children from wealthy families learned to read and write at school. Although female literacy appears to be shown in some of the images from Pompeii, their poses depict them as muses rather than as women writers. But some women did write: a Roman relief shows a female bookkeeper working in a butcher’s shop, and writing materials are found in women’s graves almost as frequently as in men’s. The presence of writing material in children’s graves, however, probably indicates aspiration rather than achievement.