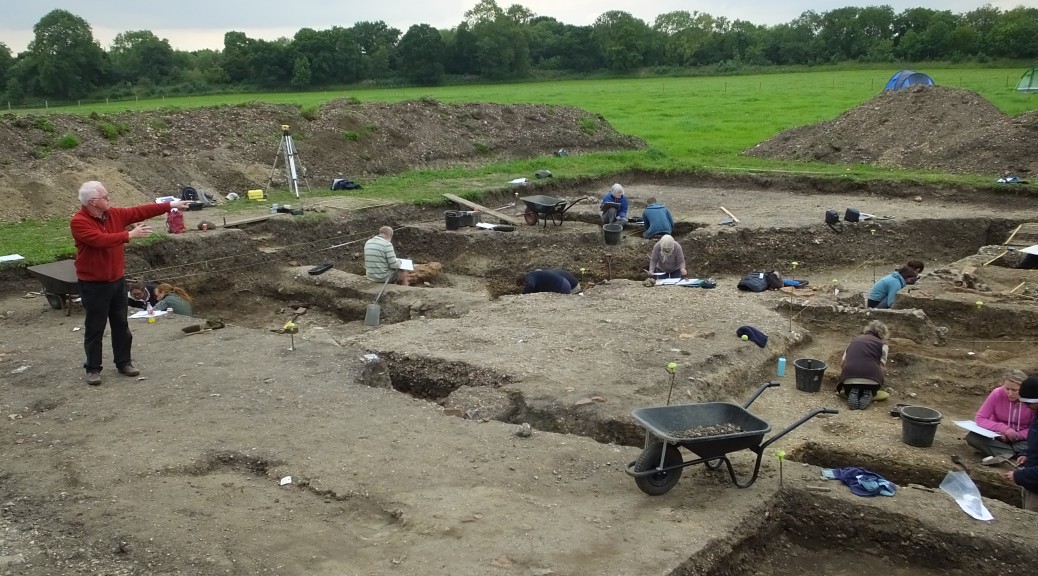 The Enigma of Insula III, Silchester

Professor Fulford explained what led him to excavate Insula III after spending 18 years and £5.0m excavating Insula IX. In that insula the building, known as ‘house 1’, which lay diagonally across the excavation trench, was found to have foundations with recycled monumental masonry in it. There were pieces of roman columns, cornice mouldings, tesserae and Purbeck marble. Clearly this material had been salvaged from another building which had been demolished c. AD 80. The tesserae were of the same type as found at Fishbourne Palace, Sussex and some of the tile had been marked with Nero’s official stamp.

In the late 70’s AD, it is thought that Cogidubnus died and the Roman administration took over the running of the civitas. The Victorians, who had excavated Silchester for the second time in 1891, had found concentrations of good quality masonry in Insula III, near the Forum site. Their technique was crude compared with that of today’s. They dug a hole, found a Roman wall and excavated along both sides until they found a joining wall and repeated the process. It was clear to professor Fulford when looking at the Victorian diagrams of the insula that they did not understand what they were digging. Someone had drawn walls that did not exist and they thought they had found a bath house in the south east corner which is actually a hypocaust. Professor Fulford has been excavating in Insula III since 2013 and has now confirmed that it contained a high status town house with a colonnade fronting at least one of the main streets. Judging by the building quality and its contents, it was the home of a rich person. The building had a hypocaust to heat the ground floor, although the furnace flue showed no evidence of use. Also an oven, Neronian tiles and a piece of high quality inscription with the word, ‘Atrebatum’ in tall Roman letters. The contents included the foot of a bronze wine warmer cast with the figure of a Romanised Greek god, called Harpocrates (the god of secrets, silence and confidentiality) made to the same standard as the Roman eagle found in the Forum.

But the house was short lived. It had been constructed c. AD 50 and by AD 80 it had been demolished and replace by timber commercial buildings, one of which contained black-smithing debris weighing 12 kg. The demolition took place shortly after the death of Cogidubnus, the client king, when the Roman administration took over the Civitas. At the end of the Roman era, the site was occupied by the Anglo Saxons whose pottery was found in the topsoil.

In the summer of 2016, Professor Fulford plans to excavate the north east and north west corners of the Insula and find more clues about the person who lived in the high status house. It would be the find of the century to discover the gold ring of Cogidubnus!