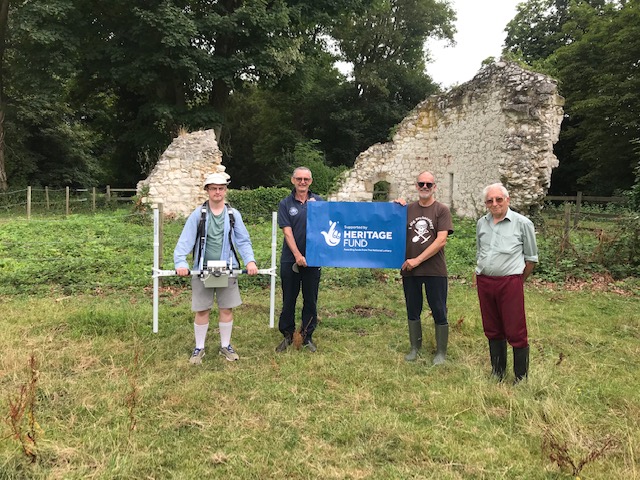 A talk by Dr Andrew Hutt from the Berkshire Archaeological Society, 17th October 2020

The Society was invited by the National Trust to undertake a geophysical survey and provide a visitor experience for three weeks in June 2019 on its lands at Ankerwycke, which consist of a series of fields in a priory landscape opposite the National Trust’s Magna Carta lands at Runnymede.  This project was undertaken by some members of the Society and some National Trust volunteers.

A Benedictine nunnery was established on the site in around 1160 C.E.  The first church was a timber framed structure with a tile roof.  This was later replaced by a building constructed of chalk blocks.  There is a seal of Ankerwycke dated to 1194 C.E.  The Latin script on the outer edge has been translated as, ‘The Seal of the Church of Saint Mary Magdalene of Ankerwycke’.

The first known map of the site was produced in 1537 in the Valor Ecclesiastica.  The buildings were not extensive as there were never more than 10 nuns housed there.  The site was surrounded by fishponds, watercourses and ditches.

Following the Dissolution of the Monasteries between 1536 and 1541 it was used as a farm.  In 1551 it was leased to Sir Thomas Smith who built a house on the building platform incorporating the Priory buildings and a created a formal garden in the grounds.

The Enclosure Map of 1800 shows the Tudor mansion.  But in 1803 the majority of it was demolished and a new mansion built.  The Wraysbury tithe map of 1840 shows this new mansion, which was later damaged by fire and then demolished, was a long way north of the Priory.  The Ordinance Survey map of 1944 shows the remains of this mansion and a swimming pool.

The Society’s gradiometer survey conducted in June 2019 showed a large set of anomalies by the River Thames, a garden in the ‘Priory field’ and a number of anomalies on an alignment in the ‘Black Walnut Tree’ field.

The Society’s findings and those of Marshall (2007) have been overlaid to show the mediaeval and Tudor landscapes.

The Study Group looked for evidence of the Priory initially by working out where the cloister is, only to find that the Tudor building was stuck in the middle of it and that the gardens were elsewhere.

The Priory gateway was to the north-west of the Priory. Some of the furrows may be the original river channels.  Oxford Archaeology augured here but unfortunately the holes were quite shallow and would probably not have reached down to the river bed.

Work to date shows that the mediaeval landscape consisted of a cloister, the priory church, a chapel for the local community, a chapter house, living and working accommodation and possibly a garden which it has not been possible to date.  The Tudor landscape consisted of the ridge and furrows which were a Tudor infill, the Tudor mansion and some out houses.  The Priory gateway was still extant at this point.  The Georgian landscape is all beyond and to the north of the area the Society has examined.  The 20th century landscape shows the swimming pool with a lot of structures around it and some anomalies to the south not previously seen.  The anomalies in the ‘Black Walnut Tree’ field are probably also 20th century structures.

The work undertaken by the Society in June 2019 gave lots of new information matching earlier information which has given both the Society and the National Trust confidence that positions for features are accurate and give a firm basis for moving forward.

Having won some National Lottery money for this site the National Trust plans to install a ferry landing to connect with its lands across the river at Runnymede, create a grass path down the side of the Thames, and a hard path arcing north-east from the proposed landing.   As the hard path needs to be dug out by a digger the National Trust needs to know what’s underneath.  To attract visitors the site needs stories, some of which the Society has already unravelled.  Along with employees of Cotswold Archaeology members of the Society will be on site during the forthcoming Festival of Archaeology working on the hard path area, the gateway area and providing a visitor experience.

Many and sincere thanks to Andrew Hutt for an interesting and well delivered talk and for standing in for the scheduled speaker with less than 24 hours’ notice.