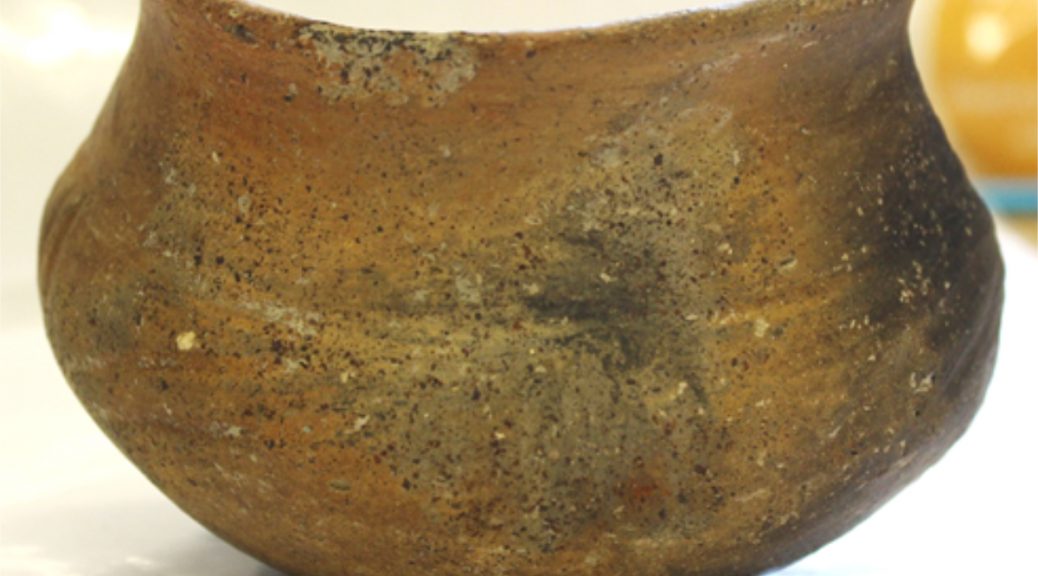 Lisa described the location of Lyminge on the Kent coast on a map that showed its proximity to the Continent. A map of Lyminge showed where, from 2008 to 2015, excavations had taken place, with several sites in the vicinity of the Anglo-Saxon church of Saint Mary and Saint Ethelburga. Lisa explained that Lyminge was one of the earliest mediaeval settlements in England, with finds dating to the 5th century A.D. Lyminge had initially been a royal site, and later developed into a monastic settlement with agricultural and industrial features. We saw a reconstruction of early mediaeval Lyminge, showing large and smaller rectangular buildings with steep thatched roofs. Although Lyminge was a port, Lisa explained that there was no evidence of it having been an emporium (trading settlement), and that the pottery assemblage found indicated that it was a high-status settlement, with high levels of feasting and consumption.

We saw tables covered with some of the over 16,000 potsherds found, which had taken Lisa four months to analyse. Lisa explained that this was the largest assemblage of early mediaeval (5th to 9th century A.D.), pottery found in Kent. While most was hand-made, the assemblage included wheel-turned pottery, such as Ipswich ware from the 8th to 9th centuries. It was the very early date of Lyminge’s mediaeval pottery that was of greatest interest, with its un-broken sequence from the 5th to the 9th century.

The early mediaeval pottery was found to have been made in or near Lyminge, in England outside of Kent, and on the nearby Continent. We saw potsherds of sand-tempered ware (sandy ware), with thumbnail impressions, and some Continental ware. We saw examples of shell- and flint-tempered ware, with sandy ware forming the greater part of the assemblage. We looked at pie charts comparing 7th to 9th century Continental imports at Lyminge and Lundenwic. Lyminge had a high proportion of shell-tempered ware, suggesting that people liked this form of pottery. Later, Lisa would explain that shell-tempered ware was lighter and thinner than sandy ware, and this appeared to be a popular feature.

We looked at the different vessel types found, with 96% being jar-types or pots used for storage or cooking. Charring on the sides was seen on a cooking pot that had sat within a fire. If the pot had sat on the fire, soot was only seen on its base. Bowls were the next most common vessel type, including bowls with handles, possibly used for ladling or scooping. Another group was of miniature bowls, which may have been used as drinking cups. Lisa said that in 400 years, there had been little variation in the types of vessels used, with the same foodstuffs cooked in the same way at Lyminge, as across all of Kent.

The fourth group of vessel types found was that of pitchers; jars with a spout and a handle, from the 7th to 9th centuries. Lisa said that similar pitchers had been found at ecclesiastical sites at Ipswich, and suggested that at Lyminge they may have been used in the monks’ refectory, for the serving of wine during meals.

We then looked at different types of decoration seen on early mediaeval pottery. We saw 5th to 7th century pottery with finger-tip bosses, made by pushing out a bulge from inside the pot. We looked at 8th to 9th century tooled bosses, made in a similar way but using a tool. Lisa explained that this bossed pottery was quite rare, only found in monastic sites in south-east Kent, such as St Michael’s in Canterbury. We looked at rouletting, where a roller was used to produce a repeating pattern, and at some of the many varieties of patterns, such as small flowers, stamped onto pottery.

Lisa explained that temper is added to clay to prevent shrinkage and cracking of pottery during drying and firing. Sand-tempered ware dominated at Anglo-Saxon sites, and this was seen at Lyminge. Lisa said that sandy ware was popular because sand temper makes pottery more durable, especially when cooking. In earlier, coarse pottery, un-sifted sand had been added to clay. In later, finer pottery, the quartz sand had been sifted. Larger quartz sand was suitable for big pots, used for the simmering of stews or for brewing. Small quartz sand was best for small pots, where quick heating, such as boiling water, was required.

Other types of temper were introduced over time at Lyminge. Thus, while sandy ware was produced in the 5th century, organic temper (chaff or finely chopped animal dung), appeared in the 6th to 7th centuries in south-east England. At Lyminge, organic-tempered ware has been dated to the mid-6th century, and Lisa said this was 50 years earlier than previously thought. Organic-tempered ware was 34% lighter in weight than sand-tempered ware, making transportation for export easier. Also, organic-tempered ware needed a lower temperature for firing than sandy ware, making it cheaper (less fuel needed), and quicker to produce. The drawback was that it was porous and brittle, and so no good for cooking.

Another ceramic change was seen in the production of shell-tempered ware in the early to mid-7th century, earlier than elsewhere in England. Shell-tempered ware was made using crushed freshwater shells, and was found at a time when the Christian monastic site at Lyminge was consuming more fish and shellfish. Crushed shell (calcite), improves clay cohesion, giving greater elasticity. A wider range of shapes and sizes of pottery could be made, offering consumers greater choice. Later, Lisa explained that shell-tempered ware could be fired at lower temperatures, like organic-tempered ware, making it cheaper and quicker to produce. However, if a larger amount of shell temper was added to the clay, it could be fired at higher temperatures and not shatter, with the pottery then being as durable as sandy ware.

We looked at a map that showed the mostly coastal South-East Kent Ceramic Zone, where Continental pottery was found, and the further inland North Kent Ceramic Zone, where Midlands ware was more common. Lisa pointed out that Lyminge fitted into the South-East Kent pottery profile, except that Lyminge had larger amounts of Continental imports, probably due to it being a high-status site. She suggested that because of its high status, Lyminge may have been at the forefront of spreading new technology throughout England.

In the Q&A session that followed, Lisa explained that no kiln sites had been found at Lyminge, because the hand-made pottery was fired in bonfire kilns, of which little or no traces were likely to be found.

Image showing one of the partial vessels excavated from Lyminge, copyright Lisa Backhouse