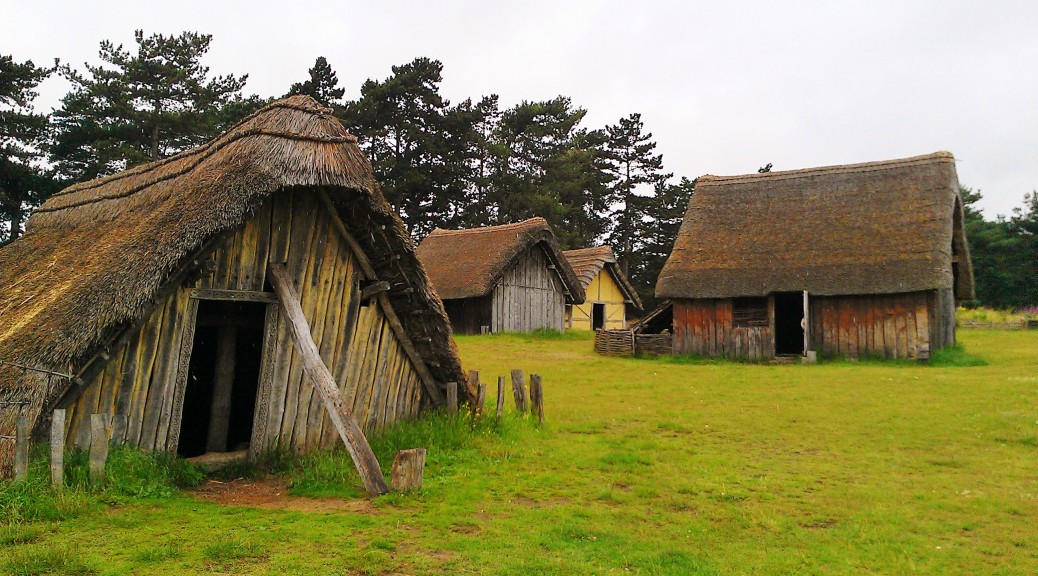 The group gathered for lunch at the One Bull Inn in Bury St Edmunds. This turned out to be a historic building on the site of an inn that dates back to the neighbouring monastery. Some of us had time, either before or after lunch, to stroll around the extensive, if much reduced ruins. As the name of the town suggests, this was once the shrine of the important English saint St Edmund.

At West Stow we were shown a brief introductory video then given a guided tour by the site manager, Lance, who has spent 20 years working his way up from keen volunteer. He lives in a house just next door and has to garden in raised beds to avoid the risk of digging up bones!

The site has seen activity from many periods from the Mesolithic, Neolithic and Bronze Age. The Anglo-Saxon settlement is an early one dating from 420 to 650 AD. Perhaps it was founded by feodorati while the Romans were moving out? There is a Roman site at nearby Icklingham and the Icknield Way passes nearby. It is not known why it was later abandoned but there is a later settlement only a mile away so perhaps they just moved on?

The reconstructed buildings are an excellent example of experimental archaeology. All have been built on the site of the excavation, using the very postholes that were uncovered. After that it is a question of interpretation and experimentation. The construction has used period tools and techniques but there are some concessions to Health and Safety. The supporting frames are more substantial than they probably were, windows have been added and a fireplace was moved to aid circulation. Various styles of thatching have been tried, although it was sometimes difficult to persuade a modern thatcher to cover the roof as thinly as an Anglo-Saxon may have done.

There are two rectangular halls on the site and several sunken feature buildings (SFBs). The numbering below is roughly in the order in which we visited them:

This was a rebuild of an earlier reconstruction and demonstrated what it would have been like if the inhabitants lived in the sunken area. Steps lead down to an earth floor and the roof was a simple peaked construction resting on the ground and supported by two end posts. Various drawbacks were discovered: the sides became wet from water draining down the roof and the floor quickly filled up with dust from churning feet.

Excavation had revealed traces of floorboards so this, and the other examples, were reconstructed with a suspended floor across the pit and 2m high wooden walls below the roof. Reconstructed looms showed how these may have been used as workshops.

This was similar to SFB 2 but the sides had been clad in tangentially split planks.

Inhabited by “Earlfric”, a Saxon re-enactor, this was furnished as it may have been in Saxon times with food cooking over an open fire burning in a stout, sand filled box in the centre. It was pointed out how the smoke easily found its way out through holes in the gables. Unusually, this building had a 1.5m deep pit lined with timbers. Perhaps it had been a cellar? The original reconstruction was a victim of arson but that in itself allowed the archaeologists to compare the results with other buildings on the site that had suffered a similar fate in Saxon times.

Two cross frames supported a roof that cantilevered out to the gables. This probably explains why no corner posts were found on many of the buildings. The walls were clad in vertical timbers. These had been split radially then tongue and grooved into each other.

Constructed as a site workshop this was an interesting example of how later Saxon building saw a return of Roman construction techniques – possibly originally an urban development. Timber framed walls were set on floor beams and panels were infilled with wattle and daub. This was a technique that would persist until the 18th century.

There were in fact two museum areas. Adjacent to reception was a series of displays showing artefacts from several periods from the ice age through to the Romans and then Anglo-Saxons. Underneath the cafe were the artefacts excavated from each building and the nearby cemetery. The latter had been poorly dug by 19th century antiquarians and much had been lost. Material from nearby cemeteries had been used to add context.

Overall this was a fascinating visit and helped to better visualise what an Anglo-Saxon community would have looked like. As an early and enduring example of experimental archaeology it is important for the evolution of ideas about building construction and use. Sadly the West Stow website is a tourism site run by the local council. Lance is hoping to restore some of the original academic content. Meanwhile I’m sure he would supply any material that we requested.

Thanks are due to Andrew for the organisation, Lance for the tour and to the tea room ladies who stayed open late to provide us with refreshments before the long journey home.