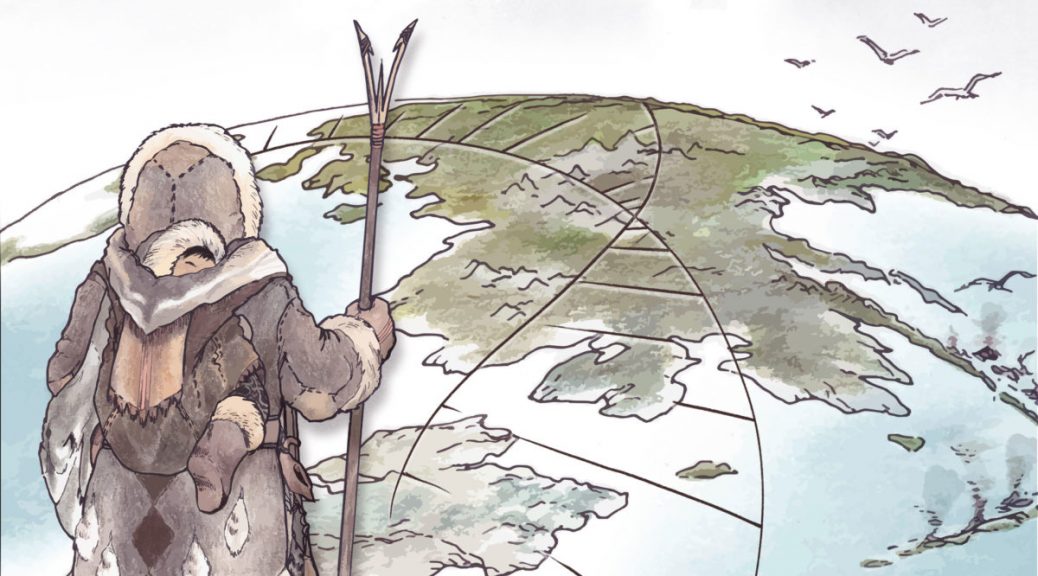 Dr Matteo started his talk by explaining that he is more used to talking to biologists and members of the medical profession than to archaeologists, with this becoming apparent as the talk progressed! However, Dr Matteo was to clearly explain genetic techniques and technical data likely to be unfamiliar to many of us, leading to a most interesting talk.

Dr Matteo’s talk was further titled ‘The conquest of the High Arctic: a genetic journey.’ He explained that he was going to show how large-scale genomic data could be used to explain how the Arctic, in particular Greenland, had been colonised by humans. He pointed out the popularity of studies of ancient genetics today, with a sample of recent headlines which could be explored in greater detail on the Internet. (I later googled the headline ‘Neanderthal genes increase risk of serious Covid-19, study claims’, and followed links to a fascinating article in Nature, published 30 September 2020.)

We looked at a chart of the evolution of human beings, showing the diverging branches of Neanderthals and of the ancient humans called Denisovans, as well as the spread of humans to all the countries of the world. We then looked at a map of the world, showing the ‘Out of Africa’ migration of 55-65,000 years ago. Also shown were the Paleo-Eskimo expansion of 4-5,000 years ago, and the Inuit expansion of 3-4,000 years ago, with both peoples travelling across Beringia and Northern Canada to the East coast islands of Canada which face Greenland.

We looked at a diagram entitled ‘Origins and continuity of Paleo-Eskimos and Neo-Eskimos’, showing a map of North Canada and Greenland, and demonstrating a migration model for these two ancient peoples. Neo-Eskimos gave rise to the modern Canadian Inuit and the modern Greenlandic Inuit.

The next slide posed four questions that genetics could address, and these questions were answered later. The talk then became somewhat technical with Dr Matteo explaining ‘What is genetic data and what evolutionary inferences can we make with it?’ We were shown examples of genetic sequences from different individuals, and saw how, at a particular locus on a genome, there could be found genetic variations. Some variations would have been inherited from ancestors and could be used to identify the people from whom the individual had descended.

We were told that of the 3.2 billion nucleotides in human DNA, about 15 million single nucleotides were polymorphisms or genetic variants. (How nice! Wouldn’t it be boring if we were all the same?)

We then looked at the evolutionary forces that caused genetic variation. These included mutation and recombination, genetic drift, natural selection and migration. At this point, Dr Matteo referred to viruses and their high level of mutation, with reference to the new, highly transmissible variant of Covid-19; something of which most of us are now very aware.

On a whiteboard, Dr Matteo showed us how to build a ‘tree’; a branching diagram that showed how an individual’s genetic material could be used to show a common ancestor, and also to show how genetic variations had arisen over time. We looked at a colourful Principal Component (PC) plot that showed how individual Europeans’ genes are very closely linked to their geographical location. On a slide entitled ‘Inference of admixture between populations’, we learned how a person’s genome could infer with which different peoples their ancestors had mated.

Returning to Greenland, Dr Matteo discussed the question ‘What can we do with population genetics?’ In other words, what information can we derive from studies of the DNA/genomes from multiple individuals and groups? We looked at a PC plot that displayed the genetic data of people from all parts of Greenland and compared it to a map of the island. It could be seen, for example, that people from Qaanaaq and villages on the North-West coast had similar genetic data, and that this was distinctly different from that of the people in the rest of Greenland.

Greenland is an autonomous Danish territory, with a European population of mostly Danish people, whose genetic data appeared on the PC plot mentioned above, and other charts, along with the genetic data of Greenlanders now living in Denmark. We saw bar charts that showed that the average European ancestry of Greenlanders was very low. Again, there were clear geographical differences, with people from the South villages, and Tasiilaq and villages on the East coast, having very little European ancestry, and other areas having somewhat more. The capital of Greenland, Nuuk, had the highest concentration, with about 30% of people having European ancestry.

We then returned to the diagram entitled ‘Origins and continuity of Paleo-Eskimos and Neo-Eskimos’, and Dr Matteo discussed the question of whether there had been one or two waves of Inuit migration to Greenland. We were reminded of how a genetic tree was built, and then looked at one for Greenlanders. The tree appeared to show that all the people of Greenland were genetically related to each other, but only very remotely to Danish people, i.e., to people not of Greenland. It was again apparent that genetic variation closely followed the geography of Greenland, with the people on the East coast more closely related to nearby people of the South villages than they were with more distant people on the North-West coast.

Next, we returned to the questions posed earlier that genetics can address, with Dr Matteo explaining the answers. Thus, there was some European ancestry to be found among Greenlanders, with a male sex-bias, and varying among locations, as we saw earlier. This study had not found Norse Vikings among the ancestors of Greenlanders. However, in the Q&A session that ended the talk, Dr Matteo explained that more recent studies using ancient DNA had found that some Greenlanders did indeed have Viking ancestors. One wave of migration brought the pioneering Inuits to the North-West coast of Greenland, from where they spread around the island, settling in coastal sites. Linguistic differences are seen to mirror the different population groups, with, for example, the North-West people speaking a different dialect to the East coast people.

A photograph of colourfully-dressed and cheerful-looking Greenlander girls sitting on ice introduced the topic of how the Greenlandic Inuit have survived the cold, harsh environment so well.

We looked at a diagram that explained how, over time, as humans migrated into different environments, there occurred in the population beneficial mutations which would help some individuals to survive better than those who did not have that mutation. As people with the ‘good’ genes continued to live in that particular environment, the genetic change became fixed, and all future descendants carried the beneficial mutation. Dr Matteo said that when looking at the genomes of the Greenlandic Inuit, very many of these beneficial mutations could be seen, and they were not seen in the genomes of people who did not live in a cold, harsh environment.

Dr Matteo talked about the traditional Greenlandic diet, which was rich in seal and fish oils, and high in omega-3 fatty acids. He said that it was likely that the genes of the Inuits enabled them to reap the benefits of the omega-3 fatty acids found in their traditional diet, but that this did not necessarily mean that people without these genes would also benefit. He talked of another beneficial mutation; that of a gene that helped the Inuit produce body heat, in order to counteract the extreme cold of their environment.

Dr Matteo went on to describe a short cut to acquiring beneficial mutations; by mating with a population that already had them. It is likely that when archaic humans; the Denisovans, first migrated into Siberia, their mating with Neanderthals enabled them to acquire the genes that meant future generations could survive in the extremely cold, harsh environment. In support of this theory, genetic studies on ancient bone found in Siberia had shown it to be from a person who was part Denisovan and part Neanderthal.

Dr Matteo’s final slide asked ‘What other questions should we ask?’ Thus:

Unfortunately, there was no time left in which to discuss these questions.

In the Q&A session, the above question about genetic tests of ancestry was of interest to genealogists. Of greater interest was the genetic evidence of Vikings in Greenland, and Dr Matteo Fumagalli ended his talk by reminding us of the quite substantial ancient Viking genome to be found in the modern British population.