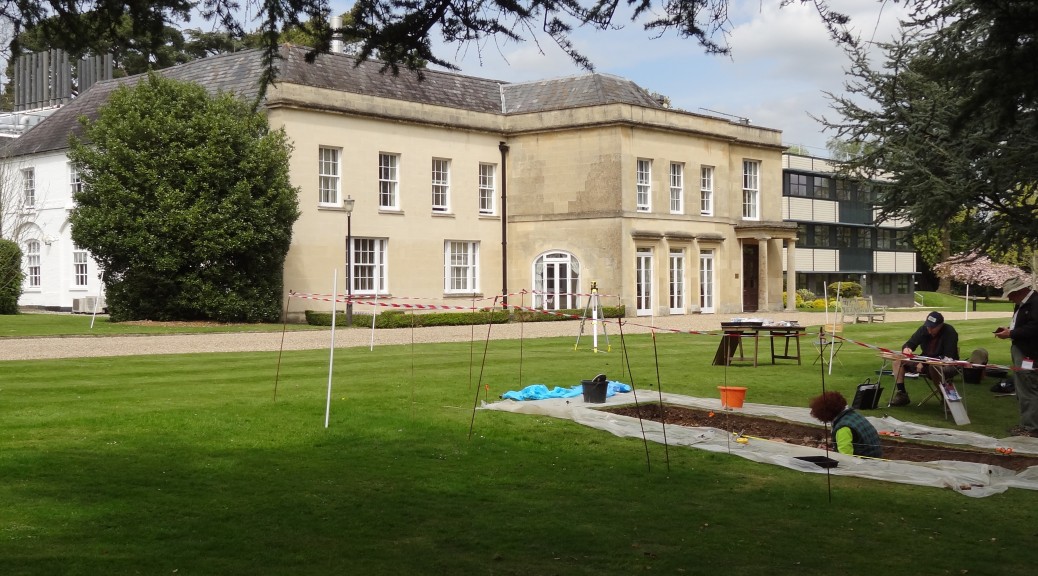 The excavations in trench 4 revealed balls of grey Kimmeridge clay which was used to make water proof floors, puddle ponds and point brick walls. Excavations in the extended trench 3 revealed a garden path which was probably associated with the Georgian garden wall and two phases of construction of a mortared flint wall.  One phase of construction has a floor of assorted tile and rubble covered with domestic rubbish – broken pots, animal bones and clay pipe.

1-21 April
BAS were on site again this year to excavate some trenches to gain a better understanding of the Roman mortared flint wall we have found in 2015 and 2016 and to see if we can get more dating evidence for building R8 which pottery evidence suggests may be Medieval.

An open day for members of BAS and BARG was held on 18th April. A full report on excavations from 2013 to 2017 will be published later in the year. Meanwhile here is a summary of this year’s work.

After Easter, for two weeks, a team from BAS worked at Blounts Court.  Their objective was to find the north east corner of the barn dating to the 16thto 17thcenturies and the end of the Georgian garden wall.  The team dug two trenches which were eventually combined to give us one large trench.  This work revealed at the Georgian wall terminated in a brick pillar which formed part of a gateway (Figure 1).  It also revealed a large mortared flint wall leading towards to the corner of the Blounts Court house.  The north east end of this wall had the base of a brick pillar (Figure 2); the other side of the gateway mentioned above.  This wall had been split by subsidence (see the line running across the feature).   To the left of the split were 3 courses of cut flints.   Our next excavation at Blounts Court will investigate this wall.